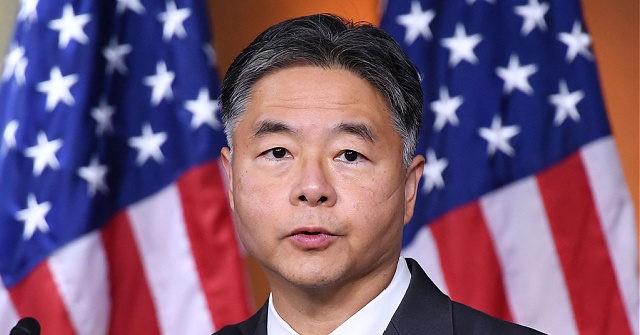 Rep. Ted Lieu (D-CA) took his elderly parents on a luxury cruise to Bermuda this past Thanksgiving as the House voted on President Joe Biden’s “Build Back Better” agenda.

Last week, the congressman filed a “proxy letter” with the clerk of the House of Representatives for the week of January 10, saying he could not travel to work in Washington, DC, due to the “ongoing public health emergency,” according to an exclusive report from Red State. It seems that Lieu filed a slew of proxy letters during the fall of 2021 when he not only traveled to Bermuda for Thanksgiving but when he attended an NFL game maskless with his wife and brother in October. Lieu also traveled to Hawaii during Christmas as President Biden warned about the omicron surge.

Lieu attended the November 17 session for the censure vote against Rep. Paul Gosar (R-AZ) but was absent when the House voted to pass the “Build Back Better Act” on November 18 and 19. His “yea” vote was cast by proxy from Rep. Don Beyer (D-VA).

“The House was also in session when Lieu was in Hawaii, which was sometime around December 22, according to his own December 29, 2021 tweet,” noted Red State. “There’s no indication that Lieu was performing any official duties in Hawaii from his social media.”

“In light of Lieu’s apparent reluctance to travel because of the pandemic and the fact that it wasn’t really a busy time in terms of campaign activity, that level of spending really sticks out,” added Red State.

His campaign spent $8,600 on airfare in one day, August 3, 2021, just a few weeks after this special, limited-time cruise series was announced by Crystal Cruises. That’s nearly half of what he spent this yr and 4x what he spent in all of 2020. pic.twitter.com/yua5HYIOri

Why was Ted’s campaign spending so much on travel? He sent 5 proxy letters btwn Sep 2021 and Jan 2022 (including weekend he went to NFL game in LA) claiming he had to miss work due to the “ongoing public health emergency.” And we don’t see evidence of fundraisers/campaign travel. pic.twitter.com/B8mvtbqjbM

Lieu’s FEC filings don’t list passengers, travel dates, travel purpose, anything. He owes us answers for this, and for why he’s partaking in luxury international travel and playing hooky from work while a constituent was murdered by a homeless person. https://t.co/FlbsomToK9