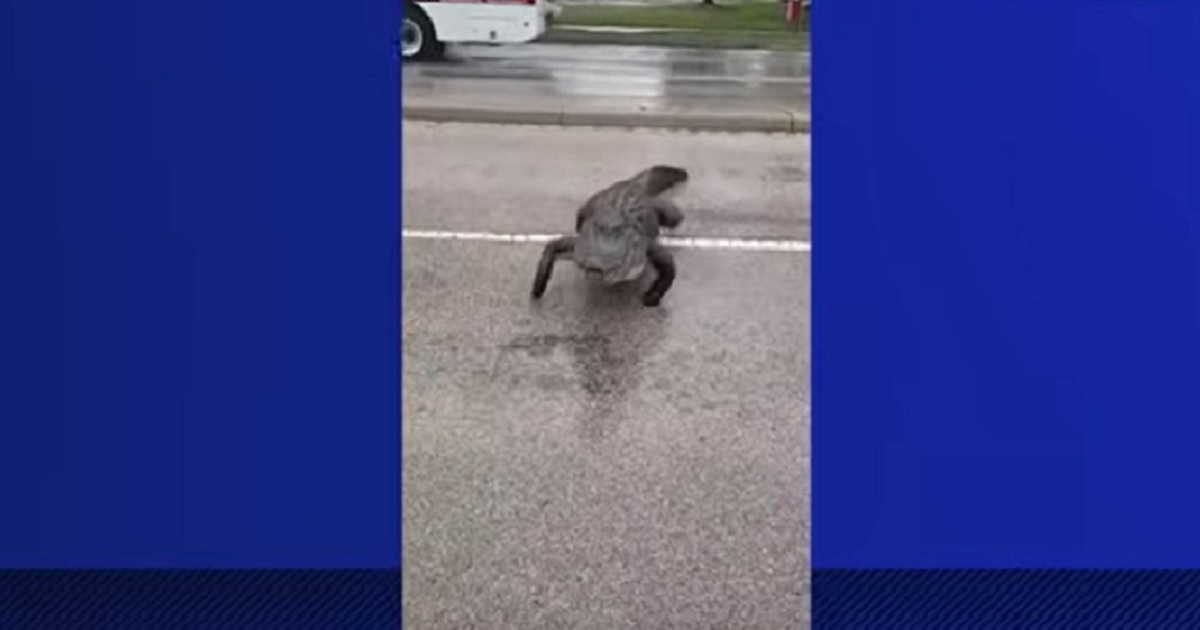 Daniel Jay Kaufman got a ride on the way home from work recently that he won’t soon forget.

The Venice, Florida, resident was stopped at a traffic light about 5 p.m. on April 7 when he noticed a Snap-on Tools van backing up on the opposite side of the highway and saw that traffic had come to a complete stop, according to The Miami Herald.

Then he saw it.

He watched as a 10-foot alligator slowly made its way across two lanes of traffic. Kaufman noticed the ponderous beast was missing a foot. He immediately began to record the event on his cell phone.

“Look at this beast! It’s like a 10-footer. Holy cow,” he says on the recording.

As the swamp monster was navigating his way over the divider, it was startled by now-moving Snap-On truck and made a beeline for Kaufman’s vehicle.

“Was wondering if he was going to try and get in through my window. Didn’t know what was going through his mind. I was in total shock at how big he was and how brave,” Kaufman told the Herald.

Kaufman said the enormous reptile hissed at him before disappearing underneath his truck.

“When he was probably three-quarters of the way under my box truck, I felt a little wiggle or shake from under truck,” Kaufman told the Herald.

Would you be frightened in this situation?

Then the alligator, perhaps stuck and probably quite agitated, began shaking the truck. Kaufman is heard on his recording saying, “Just moved my truck. Are you kidding me?”

“By this time, the light is green and no cars were in front of me. I couldn’t move because I didn’t want to hurt him under my truck. For a second, I was thinking he might stay there.”

Finally, the alligator freed himself from the undercarriage of Kaufman’s truck and appeared on the other side.

“I stayed ’til he was fully clear of my truck and a safe distance away,” Kaufman told the Herald.

He noted that his truck had not been damaged.

Bottom Falls Out for Disney, 70% of Americans Turn on Company as Video Shows Anti-Grooming Chants at Park

Kaufman posted his video on Facebook where it’s received almost 440,000 views and more than 1,000 comments.

I suppose no one should be shocked to see an alligator in Florida, but the thought of a 10-footer aiming directly at your vehicle, then shaking it like a toy, could be a little jarring.

WTVT-TV in Tampa Bay reports that April is the beginning of alligator mating season which means that “the males are on the move.”

Dan Costell, associate curator for reptiles and fish at Zoo Tampa at Lowry Park, told WTVT, “During mating season, a lot of younger male alligators are getting pushed out of their homes by the big males.”

“Sometimes those males can get a little aggressive, maybe they’ll go after a canoe that comes into their area. Females, they’ll protect their nest, and they’ll watch over the young for a year. They can be a bit more aggressive,” he said.

Costell also cautions people against feeding alligators. “Once you start feeding them, they lose the fear of the people then we have problems.”

Finally, Costell warns, “If you see an alligator leave it alone, give it its distance.”