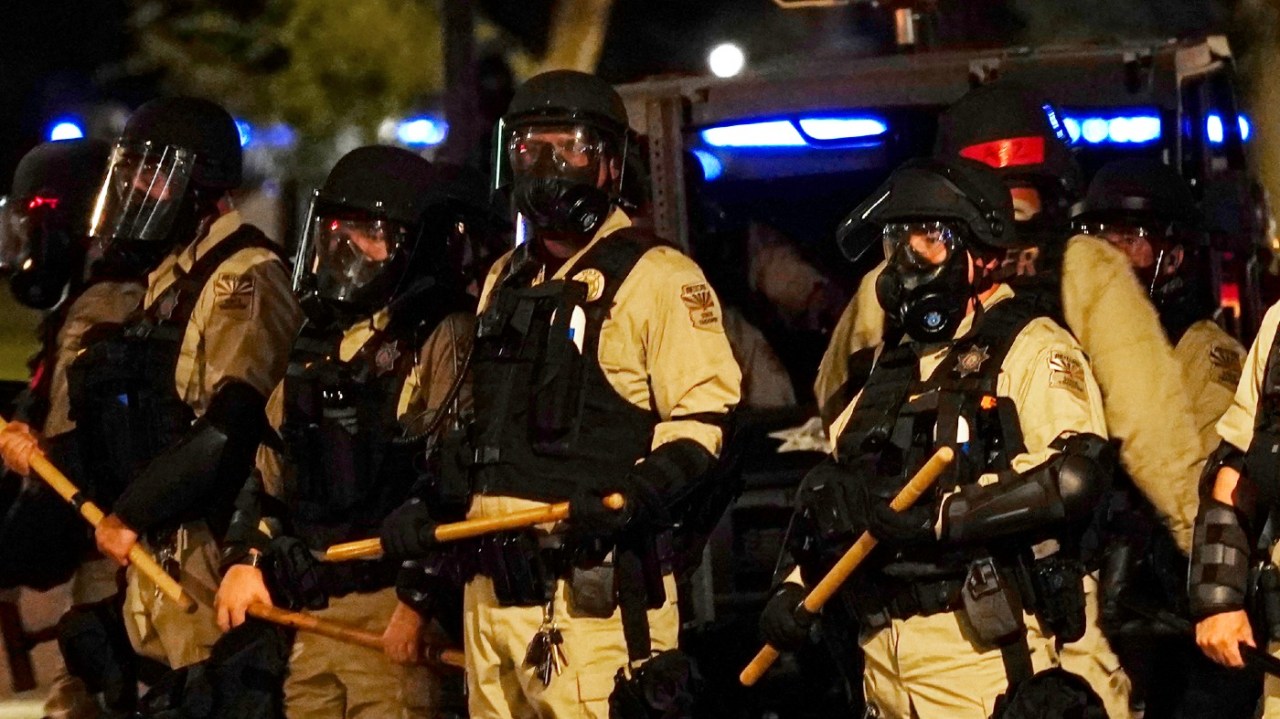 Tensions erupted between police and demonstrators during protests over the weekend in response to the Supreme Court’s decision to overturn the constitutional right to abortions.

A number of GOP-led states, mostly in the South and Midwest, quickly implemented laws banning or restricting abortions, while many Democrat-led states have moved forward with measures to protect abortion access.

While many protests were peaceful, protesters were arrested in states including South Carolina and Oregon after the Friday decision, while police also used force while confronting demonstrators in states such as Arizona and California.

Six demonstrators were arrested Saturday on charges stemming from interfering with police, disorderly conduct, and resisting arrest during protests in Greenville.

In a statement on Sunday, the Greenville Police Department (GPD) said that its officers monitored separate pro and anti-abortion demonstrations in the city.

The department added that about 400 to 500 people showed up for the demonstration, saying that arrests happened when some demonstrators interfered with the arrest of another protester.

“On several occasions, officers had to address people in the roadway and parties from one side trying to go over to another,” the department said in a statement to The Hill.

“The picket was deemed an unlawful assembly, and officers dispersed both sides,” GPD added.

Oregon authorities said they arrested ten protesters who were a part of a large crowd in what has been called a “night of rage” on Friday night.

In a statement, Eugene Police Department (EPD) said that protesters and police clashed at a local medical center, where a crowd of some 75 people had gathered wearing all-black clothing, with some picking up rocks and wearing gas masks.

“An officer used a public address system to admonish the group of more than 75 people that they were committing disorderly conduct and were subject to arrest,” the department said in a news release.

“This had no effect on the crowd and they advanced closer to officers. Unknown people in the crowd threw smoke bombs at officers along with several filled water bottles.”

Nine people were charged with disorderly conduct, with one being additionally charged with escape in the third degree and resisting arrest. Another demonstrator was charged with harassment.

Jeann Lugo (R), a local police officer, was seen on video striking Jennifer Rourke (D), his opponent in a state Senate race, at a Roe v. Wade protest on Friday.

Rourke wrote on Twitter that Lugo had “violently attacked” her, saying, “This is what it is to be a Black woman running for office. I won’t give up.”

In a statement, the Providence Police Department (PPD) said that Lugo has been placed on administrative leave with pay as it investigates the matter.

The department also said that Lugo was charged with simple assault and disorderly conduct. Lugo said in his own statement that the incident was “very chaotic”.

“As an officer that swore to protect and serve our communities, I, unfortunately, saw myself in a situation that no individual should see themselves in,” Lugo told the Boston Globe.  “I stepped in to protect someone that a group of agitators was attacking.”

However, Lugo on Saturday announced he was ending his Senate campaign.

Officials and protesters issues conflicting narratives about what led to the police action, according to the Washington Post.

Republican Senate President Karen Fann described the protest as an attempted insurrection, while protest leaders call it an overreaction against a crowd made up mostly of people opposed to the Supreme Court’s decision.

Republican Sen. Michelle Ugenti-Rita took videos of the scene and told the Associated Press the protesters were trying to break the windows into the Capitol building.

“There was no other conclusion than they were interested in being violent,” she said. “I have no other takeaway than that.

Rep. Athena Salman (D) said on Twitter that those gassed were peaceful, noting that many of her Democratic colleagues recently voted to raise police pay.

“Some even called it historic,” she wrote. “Remember that every time the cops gas peaceful protesters.”

Actress Jodie Sweetin shoved by police at protest in LA

Actress Jodie Sweetin, known for her portrayal of Stephanie Tanner on the hit television sitcom “Full House,” was shoved by authorities during an abortion protest on Sunday.

A video surfaced online showed the Los Angeles Police Department (LAPD) blocking a group of demonstrators at a highway, where a couple of officers are seen pushing back Sweetin, 40, who was holding a megaphone, onto the ground.

In a statement, LAPD told NBC Los Angeles that officers responding to the scene were trying to prevent the group from overtaking the 101 freeway.

“The force used will be evaluated against the LAPD’s policy and procedure,” the department said in a statement.

In a statement through her publicist, Sweetin said that she will continue to fight for rights, NBC Los Angeles reported.

“Our activism will continue until our voices are heard and action is taken. This will not deter us, we will continue fighting for our rights. We are not free until ALL of us are free,” she said.