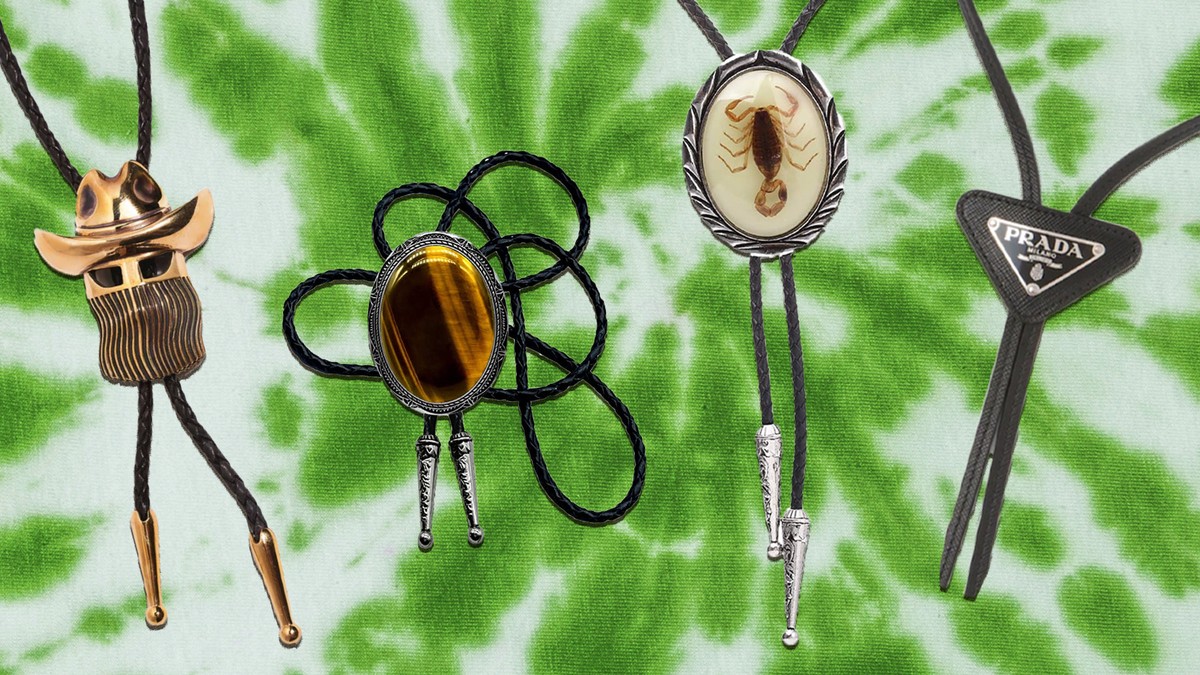 Why tie the knot, when you can slide the bolo? There are so many ways to pull up to a formal event in a look that doesn’t doesn’t make you feel like you’re cosplaying as a finance bro for the night. (The kids are getting hitched at aquariums these days, for god’s sake!) The least we can do is offer up a small, but powerful, sartorial accessory that can take your outfit from yawn to yeehaw: the bolo tie.

As with the hamburger, the origins of the bolo tie are a little unclear. We know that it rose to popularity in the early-to-mid 20th century in the United States, and that some of the earliest ties were fashioned by indigenous craftspeople from Puebloan, Hopi, Navajo, and Zuni tribes; we also know that a dude named Victor Cedarstaff—who was actually not in Magic Mike—claims to have invented the accessory in the 1940s when the wind ripped his cowboy hat from its drawstring ties. Hence, the bolo was (maybe) born, and the world has been dripping in its yeehaw swagger ever since.

These days, bolo ties are for everyone. They’re for the rancheros and the club girls; the people who own cowboy boots, Doc Martens, and Crocs. We’ll rock a bolo to Berghain, the bodega, and our best friend’s wedding, just to keep the guests wondering where you came from. A dude ranch? Club Anarchy? Erewhon? It’s anyone’s guess, and everyone’s fantasy to wonder.

Whether you’re looking to drop major coinage on a Prada bolo tie or trying to snag a slick western slider for under $15, here’s how to find, style, and rock one of the best accessories that’s ever been invented for hot and lazy people.

How to wear a bolo tie

Not sure where to start? The rules are as loose as a goose when it comes to how you wear your bolo tie, but n00bs can pair a traditional one with a denim button-down from Wrangler or an embroidered men’s shirt from Taylor Stitch.

You also don’t need to know how to tie a bolo tie, because it kind of ties itself. A bolo tie is simply made up of a rope or cord that tightens, loosens, and fastens with a brooch/pendant of sorts. If you’re stepping out for a few brewskies in an A-line Cameron Poe tank top, you’ll probably wear the pendant loosely at the bottom of the tie, but if you’re headed to a more formal event, you’ll probably fasten it close to the collar like Damson Idris did with his Prada bolo tie:

That dreamy Prada bolo tie is undoubtedly an investment, but one that we would gladly give our pinky toe for. Imagine pulling up to your über-cool friends’ industrial warehouse/petting zoo/bespoke, upstate NY weddings with that sucker. It would instantly elevate any off-the-rack or ASOS suit, making everyone think you dropped thousands on your head-to-toe fit (not uncommon for formal suits, jabroni), when, in actuality, you spend no more than $89 on your suit. Talk about an accessory that pulls its own weight.

If your formal event is a little more relaxed, try pairing a scorpion bolo tie with Tony-Soprano-worthy button-downs and polo shirts. Bodega has a spicy smattering of streetwear-meets-mafioso men’s tops, and Amazon also has a surprisingly rad spectrum of classic options.

Now that you understand the basics of how to style a bolo tie, we can jump inside the ball pen of turquoise, tiger’s eye, filigree, and other western bolo ties that speak to the accessory’s yeehaw origins. Kick up your cowboy boots, and bring a rotation of bolo ties inspired by cicadas, hypnotic gemstones, and Orville Peck into the fold.

You were a Hot Topic mall rat

Is your truest bolo avatar a little less Fievel Goes West, and a lot more Beetlejuice? Then opt for a spider or skull bolo tie.

Bring the bolo to the wrist

How low can you bolo? To the window, to the wall? ‘Til the sweat drops down your Yves Saint Laurent bolo tie bracelet? Swoon.

See you at the honky tonk, saddle tramp.