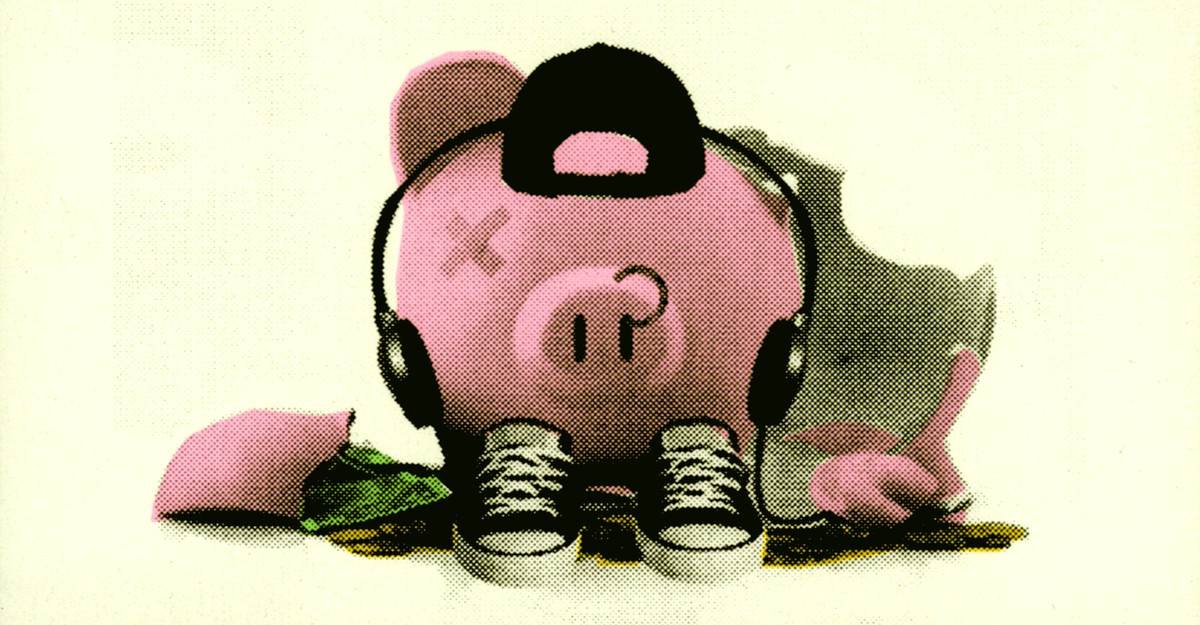 In the summers of my youth, the rooms were always air-conditioned. This machine-cooled air came not from window units, which were a relic of the cities, but from central systems that chilled every inch of living space to an Alaskan 67 degrees. The air seemed to come from everywhere and nowhere. It had no warm spots, no eddies, no pockets of humidity. It was a sea of comfort that ran from the threshold of the front door—passing from yard to house was like moving between seasons—to the peak of the finished attic. Now here I am, in the late summer of 2022, eons away from my 1970s and ’80s suburban childhood, in a world beset by heat waves, droughts, wars, and disasters, sitting before a Walgreens fan, bathed in sweat and meditating on the wealth of nations and the fate of the American dream. And the realization comes that I am just one of the millions of members of Generation X who, looking into the sun of the thing, must admit that we are in fact downwardly mobile, the first American generation that will perform worse economically than their parents.

When your median Baby Boomer was 50, around the turn of the millennium, he earned roughly $30,000 a year. I use the male pronoun because the gender-wage gap among Boomers was even wider then than it is today. Currently, a 50-year-old with the same education, family background, intelligence, good luck and bad, will earn slightly more in inflation-adjusted terms (the youngest Boomers are now nearing their 60s). Things have improved—not enough, gap-wise, for women and people of color—but overall the picture still looks like stagnation, or worse. According to the Pew Research Center, “the typical Gen Xer has just over $13,000 in wealth (defined as total assets minus total debts), compared with the $18,000 held by a typical Gen Xer’s parents when they were the same ages.” Or, as The Atlantic’s Derek Thompson just described the change in life chances for a child born in the ’80s compared to one born in 1940, “In 40 years, the American dream went from being a widespread reality to essentially a coin toss.”

It’s bad even before you consider the dragon at the door: debt. Our grandparents had practically none, our parents had little, but it can seem, to those born between 1965 and 1985 (the precise parameters given for Gen X vary), that debt is the only thing we’ll ever really call our own. Negative numbers. Swampland on the wrong side of zero.

Members of my generational cohort have more debt than those ahead of us (Boomers) and those behind (Millennials). We are more indebted than any other Americans in history. Worse off, debt-wise, than those who struggled through the Panic of ’93 (1893!), than those who sang “Night and Day” during the coldest winter of the Depression (1932), than those who reached middle age in 1977, when the term stagflation entered the popular lexicon. Our imaginative life may still belong to the music of Nirvana and the movies of John Hughes, but as we scan the fat documents from banks and the credit-card companies that arrive in our mailboxes, here’s what we’re thinking: Please, Joe Biden, make it go away!

Derek Thompson: The secret to reclaiming the American dream

That debt is in the houses we live in but do not own, in the cars we drive but have not paid for, and mostly in the colleges we have finished but that have not finished with us. More than a quarter of Gen Xers carry student debt, their own or that of their kids: $40,000, $60,000, $100,000. You try swimming with that shackled to your ankle. And the problem is not just that college is so much more expensive than it was even a couple of decades ago—according to the Georgetown University Center on Education and the Workforce, the average cost of undergraduate education grew 169 percent from 1980 to 2019—but that it’s so much more necessary. A college degree is the new high-school diploma: the ante you need just to sit at the table.

How big the ante depends on the school. NYU tuition runs upwards of $55,000 a year. Yale is closer to $60,000. Even the state schools have become absurdly pricey. But if you don’t send your kids to college, you’re setting them up to fail. In their mid-20s to their early 30s, the median college grad out-earns a high-school grad by about $23,000. And the gap only grows from there. The result is a crushing overhang of debt; the harder you work, and the older you get, the further you feel you are from solvency. For many, the American dream has come to resemble a mirage that recedes as you cross the desert.

What is the American dream anyway?

It’s a promise. The promise of doing better than your parents, who did better than theirs. The promise of owning property. It’s a keep off the grass sign. It’s a house in a town where you can walk to the train and still see the stars at night. It’s a Neiman Marcus credit card and a Cadillac Coupe DeVille. It’s that new-car smell and the mall packed for an entire month before Christmas. It’s two cars in a three-car garage, one of them a hybrid. It’s a McMansion on a cul-de-sac. It’s two kids and a dog with papers. It’s New Year’s Eve at an all-inclusive resort in the Caribbean. It’s a retirement fund that, like the patch of peonies that accents the box hedge, grows while you sleep. It’s perhaps the most American of FDR’s Four Freedoms: freedom from want. It’s every year more and bigger and stronger than the previous year. It’s living in bigger rooms, watching larger TVs, having fuller bank accounts.

By this measure, I will probably be the first member of my family, which reached this country in the 1880s, who fails to attain the American dream. I make less than my parents, live in a smaller house, drive a crappier car, take fewer vacations, and carry more debt. A life that started in central air is unfolding to the hum of a box-store fan.

Was it a mistake? I don’t think so, but I’m not positive. They say you can’t buy happiness; I’d at least like to be able to try.

But most of my predicament—it’s shared by Gen Xers, Millennials, and presumably Gen Z and all those who will follow—is the result of history, the inevitable life span (youth, maturity, senescence) of any great nation. The story of America is the story of a bull market. The wealth and its increase—an increase that made my parents’ economic life look like a ramp that went straight up—were at least partly built on plunder. First, of the land taken from the Native Americans, which became the free land for ranchers and farmers that ignited the boom. Then, of the free labor from enslaved people, the free silver from the mines, the free gold in the rivers, the free coal in the mountains, the free oil in the ground. You bend down and pick it up and, by God, you were rich! That’s the American dream.

After the Second World War, America alone was not in ruins, the richest nations of the Old World having set one another on fire. For decades after V-J Day, American affluence and influence seemed unstoppable forces. We owned nearly everything and wrote nearly every rule and patrolled nearly every sea. We were the market and the supplier, and even if we didn’t sell it, we still took a cut.

And now, we wake, as at the end of a long nap, to realize that we have not only used everything but used everything up. We have run out of new land to settle, new people to exploit, new markets to service. America is the dream of endless growth, and without that growth, there is seemingly no dream. That’s the real cause of all the debt carried by my generation: We used it in the way you use a hole punch to add inches to your belt. Extend the boom. Preserve the dream. Now we’re out of leather.

As far as I can tell, this has left us with just two ways to preserve the dream. Either we find a new world to colonize and exploit, which is what Elon Musk sees when he looks through a telescope at Mars. Or we change the meaning of the dream.

The second option seems a better bet. Giving up all fantasies of winning lottery tickets or million-dollar inheritances is liberating—and not just for members of Gen X, but for all Americans born during the ebb tide who find themselves in the same fix. Freighted as we are, after decades of spending, just servicing our debts is becoming ruinous. The sun is up, the chairs are on the tables, the tab for the night before has been tallied and placed on the bar—and all we do is stare at one another, hoping someone else will reach for their wallet first.

Dani Alexis Ryskamp: The life in The Simpsons is no longer attainable

Other bills are coming in. I can practically hear the polar ice melting from my porch. Paying for the warming planet means the American dream will have to change, as surely as paying for college, food, and shelter means that my own piece of the dream has already had to change. Which—and here I break from much of my family—is not a bad thing. Maybe it’s even a very good thing. We never did need all that stuff to have an excellent time. And the chase after the material bounty that’s been the reality behind the dream—the carrot and the stick and the watch when you’re 60, to paraphrase Albert Brooks—is a snipe hunt anyway, a fool’s game.

Yes, I am pinched at the moment. Yes, I worry about my future, that of my kids and of my country. Yes, I am navigating, in this time of college cost and inflation, dire financial straits—between the Scylla of bills and the Charybdis of debts. But, one, that’s the task, and two, to quote The Godfather, that’s the life we have chosen.

So you do what’s necessary to get through, and you give up the fantasy version of the dream. You will realize that it was a chimera. (If America were a person, I’d hug them and say, “Sit down. You look exhausted.”) But the work was not wasted. It was the hassle and hustle that finally made you arrive at the only question worth trying to answer: What do I really want?

I feel no shame at failing to match the economic accomplishments of my parents, because that failure has presented me and my generation with a different sort of opportunity: to find meaning and value in the more or less involuntary downshift. Only by giving up the old dream can you find a new dream. A life beckons beyond the cool air that keeps us trapped inside. You really appreciate the breeze that comes at dawn only after sweating through a hot August night.