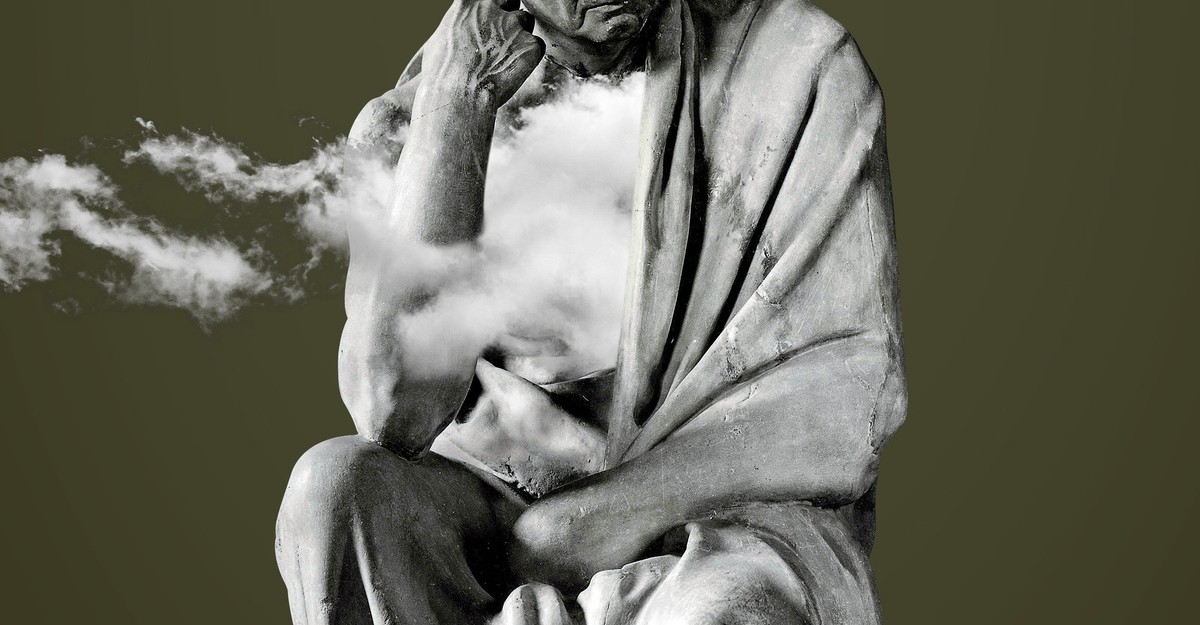 A cancer diagnosis is a shocking blow for anyone. But you might imagine that someone like Timothy Keller, a Presbyterian minister who has spent years talking with people about mortality, would be well prepared to deal with that kind of news. Keller has sat at people’s bedsides as they died, and he’s written a book called On Death. Perhaps most crucially, he believes in God and an afterlife. And yet, when Keller received a diagnosis of Stage 4 pancreatic cancer, he was terrified. No matter what you believe, you’ll have to face an end to this life, and all of death’s unknowns.

The differences between someone like Keller and someone who doesn’t share his faith can feel profound. But upon closer inspection, simplistic understandings of each tend to fall apart. Even those who wouldn’t call themselves religious are likely to subscribe to some magical thinking. When we encounter something mysterious, argued the physicist Alan Lightman, we all reach for explanations—but some prominent scientific theories aren’t testable. Each of us commits to beliefs that can’t be proven, and lets them guide our worldview.

Empirical inquiry—often considered strictly a province of the rational—can also be fueled by fervent belief. Take the character Gifty in Yaa Gyasi’s story “When My Mother Came to Stay”: Though she’s strayed from Pentecostalism, the persistent presence of some sacred mystery drives her research career. And in real life, people sometimes use scientific methods to investigate otherworldly phenomena—like the community, including some respected physicians, studying the neuroscience of near-death experiences to prove that an afterlife exists.

Most of us acknowledge the complexity of our own beliefs, and know they don’t fit neatly into boxes. But it can be tempting to make assumptions about what others hold to be true. In “From a Window,” the poet Christian Wiman implies that skeptics who try to debate faith away are missing the point: You can endorse rationality and still celebrate what feels holy. Indeed, faith and reason aren’t separate at all. And when we notice the overlap between the divine and the secular—or cast aside those labels entirely—we better honor how nuanced, unpredictable, and messy human belief can be.

​Every Friday in the Books Briefing, we thread together Atlantic stories on books that share similar ideas. Know other book lovers who might like this guide? Forward them this email.

When you buy a book using a link in this newsletter, we receive a commission. Thank you for supporting The Atlantic.

Growing my faith in the face of death

“One of the first things I learned was that religious faith does not automatically provide solace in times of crisis. A belief in God and an afterlife does not become spontaneously comforting and existentially strengthening.”

“When My Mother Came to Stay”

“Though I had done this millions of times, it still awed me to see a brain … I had to try to understand and to extrapolate to those of us who made up the species Homo sapiens, the most complex animal, the only animal who believed he had transcended his kingdom, as one of my high-school biology teachers used to say. That belief, that transcendence, was held within this organ itself. Infinite, unknowable, soulful, perhaps even magical. I had traded the Pentecostalism of my childhood for this new religion, this new quest, knowing that I would never fully know.”

The science of near-death experiences

“All of this makes NDEs perhaps the only spiritual experience that we have a chance of investigating in a truly thorough, scientific way. It makes them a vehicle for exploring the ancient human belief that we are more than meat. And it makes them a lens through which to peer at the workings of consciousness—one of the great mysteries of human existence, even for the most resolute materialist.”

Where science and miracles meet

“The inconvenient truth about both of these explanations of the fine-tuning problem—intelligent design, on the one hand, and the existence of a multiverse, on the other—is that neither can be proved. Both must be taken as a matter of faith by their respective supporters.”

📚 Wonders and the Order of Nature, by Lorraine Daston and Katherine Park

“And though a man’s mind might endow / Even a tree with some excess / Of life to which a man seems witness, / That life is not the life of men. / And that is where the joy came in.”

About us: This week’s newsletter is written by Faith Hill. The book she’s reading next is Nothing to Be Frightened Of, by Julian Barnes.

Comments, questions, typos? Reply to this email to reach the Books Briefing team.

Did you get this newsletter from a friend? Sign yourself up.