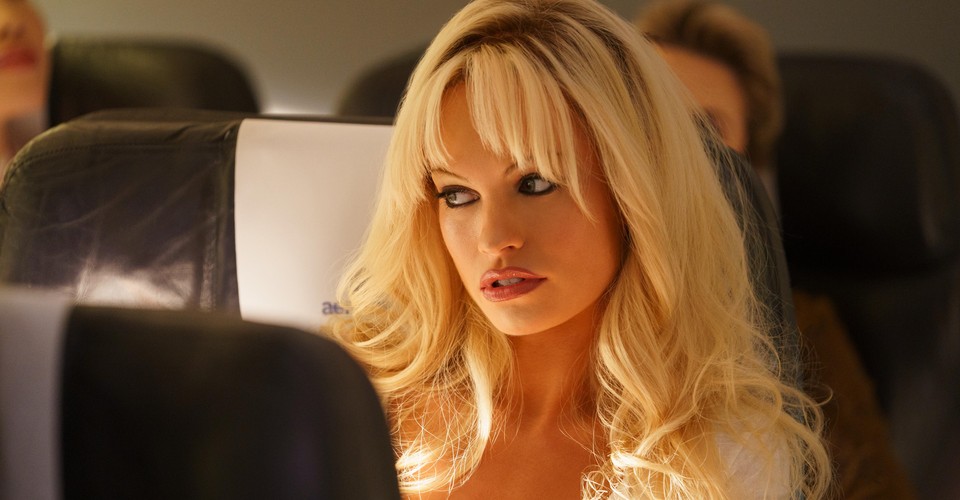 The Hulu miniseries Pam & Tommy could have had a fascinating focus. We see glimpses of it in the first minute, on a grainy TV screen where Jay Leno (played by the comedian Adam Ray) is interviewing Pamela Anderson (Lily James). “Speaking of sex, and I have to ask,” Leno says, throwing his hands up and down in the faux-innocent shrug of someone just asking questions. “The tape.” The audience audibly inhales. Anderson, whom James imitates in uncanny fashion—the protruding tongue, the hands perched nervously on crossed legs, the slightly hunched posture—plays similarly dumb. “What tape, Jay?” she breathes. Leno casually twists the knife. “What’s that like?” he says. “What’s it like to have that kind of exposure?” The camera zooms in on Anderson’s pained face as she grapples with her response.

The choice to mediate our first glimpse of Anderson through multiple screens is, perhaps, telling; it has a distancing effect that keeps her at arm’s length. Pam & Tommy is an eight-part miniseries about how an intimate home movie—made by Anderson and her then-husband, the rock star Tommy Lee, on their honeymoon—became the first viral celebrity sex tape. With the Leno scene, the show suggests sensitivity for Anderson’s plight (the tape was stolen by an irate contractor and sold online without her consent). Then it abruptly changes course. The scene that follows, set one year earlier, shows a carpenter, Rand Gauthier (Seth Rogen), trying to focus on construction work in a Malibu mansion as Anderson and Lee (Sebastian Stan) go at it loudly upstairs. This is how the series really sees Anderson: Woman Victimized by the Culture, but also Woman Unabashedly Banging Her Heart Out.

Pam & Tommy, notably, hasn’t been sanctioned by Anderson, who has ignored all attempts by the series’ writers and stars to get in touch with her, and who is reportedly appalled by yet another distillation of her life and career down to the moment when she was most appallingly exploited. In response, the show’s lead director, Craig Gillespie (I, Tonya), has said that reclaiming Anderson’s narrative was part of the point of the series—that the people involved “absolutely respect [her] privacy” and wanted to use the series to change the “perspective of what happened.”

Really? I don’t necessarily doubt the good intentions of the showrunners, Robert Siegel and D. V. DeVincentis, and their show—in moments—does succeed at communicating the ordeal Anderson endured and the many different forces that colluded in her suffering. But you’re not respecting her privacy when you re-create a sex tape that was stolen and viewed by hundreds of millions of people without her permission. You aren’t reclaiming her narrative on her behalf if she insists that she doesn’t want you to do so. The show’s creators would be better off just stating the truth: They wanted to tell Anderson’s story because it’s a good story, and its revelations have deeply informed the mess of celebrity and internet culture that we wallow in today. Even the fact that she resisted participating in the show is telling: What Anderson wants for herself has always mattered less than the desires she incites in others.

Critiquing Pam & Tommy as a single, unified work is hard because it’s such an awkward hybrid of genres and ideas. Based on a 2014 Rolling Stone story about Gauthier, the contractor with a grudge who accidentally introduced revenge porn to mainstream America, it’s equal parts caper, raunch comedy, romance (“the greatest love story ever sold” is the tagline), and cultural analysis. A scene in which Lee converses with his puppetized penis (voiced by Jason Mantzoukas) is ripped right from his memoir but feels derivative of Big Mouth. Meanwhile, an episode about a legal deposition Anderson gives while suing Penthouse—written by Sarah Gubbins (Shirley, Better Things) and directed by Hannah Fidell (A Teacher)—straightforwardly parses all the ways Anderson was ritualistically humiliated in the ’90s for daring people to look at her.

The first episode hardly features Anderson at all. It’s focused on the conflict between Gauthier—like so many Rogenite heroes, an endearing naif whose interests include marijuana and masturbation—and Lee, who’s hired him to manifest a project the rock star has envisioned as a “fucking futuristic, state-of-the-art love pad 2000.” Lee is an unexploded bomb. The puppeteer Frank Oz once said that Animal, the frenzied drummer he performed as on The Muppet Show, could be summed up in five words—drums, sleep, sex, food, and pain—and the same goes for Stan’s portrayal of Lee, with trunkfuls of pharmaceuticals thrown into the mix. The Mötley Crüe drummer is heavily tattooed, priapic, and … surprisingly sweet? To watch Pam & Tommy after living through the tabloid coverage of their relationship—the beach wedding, the hepatitis, the kids, the breakup, the domestic abuse, the jail sentence, the reunions—is to feel uncomfortably like you’re rooting for them, these crazy kids who take endless baths, are dying to have a family together, and don’t have sex until their wedding night (four days after their first date).

Their downfall, though, is inevitable. After Lee fires Gauthier and waves a shotgun in his face, Gauthier, an “amateur theologian,” decides that karma is taking too long and cooks up a revenge plot. He cases the Malibu home for several weeks, breaks in one night, and steals a safe, which contains cash and jewelry, numerous guns, and an unmarked video tape. That tape, he discovers, contains an explicit home movie filmed on a yacht during Anderson and Lee’s honeymoon. He shows the tape to a porn director he knows, Milton “Uncle Miltie” Ingley (Nick Offerman, in fine sober-unhinged form), who immediately appraises its value. “This is so private,” Ingley says. “It’s like we’re seeing something we’re not supposed to be seeing … which is kind of what makes it so fucking hot.”

The pair’s efforts to monetize the tape allow the show to make broader points: The series positions the Anderson-Lee video as not just a debauched tabloid frenzy, but a moment that actually changed the world—a fracturing of established mores in American life (about privacy, sex, celebrity, commerce) at the hands of the internet. Here was a new, unregulated marketplace without any standards or legal precedents. The porn industry at the time required signed releases to sell videos of adults engaging in sexual intercourse; the internet meant that Gauthier could sell the tape he’d stolen without restriction. But it meant that anyone else could too. What had been a business was now suddenly a free-for-all for anyone with an explicit video and an agenda. (Siegel, Pam & Tommy’s co-showrunner, seems intrigued by historical turning points in American capitalism—he wrote the script for The Founder, the story of how Ray Kroc ruthlessly turned McDonald’s into an incomparable business empire.)

Naturally, this shift was bad news for women. The way Pam & Tommy tells the story doesn’t so much reclaim her narrative as manipulate it to draw bigger conclusions. The major beats of her life story are there: her “discovery” at a football game, her first audition for Playboy, her elevation to icon status via a prime-time beach soap and a strategically tailored red bathing suit. James looks so similar to Anderson in some scenes that the lines between truth and fiction seem to wobble a little. And the English actress captures what may be the heart of Anderson: She describes herself, in one early scene, as just “a good Christian girl from small-town Canada,” and she’s resolutely sweet and courteous to almost every person she meets. But in Pam & Tommy, Anderson comes to represent more than herself—she’s an avatar for every woman who’s ever been slut-shamed or abused, or who’s ever suffered a loss too poignant to bear. She’s a foil for men like Gauthier to have their own moments of revelation. “Oh man, I feel terrible for women,” he tells his ex-wife (Taylor Schilling), a character patently created for these kinds of discussions. “They gotta deal with us.”

For Anderson, maybe the fact that she’s less a person in the show than a collection of tropes and stories animated into a whole is some consolation. But I doubt it. The more we rely on these narratives of ’90s revisionism to confront the flaws in our own past thinking, the more responsibility we have to wonder who’s being served in the process. Is it right to take a painful invasion of privacy that was turned into mass entertainment and turn it into mass entertainment again, even if the motivations have changed? Have they changed? I enjoyed this show. It made me think about Anderson differently—as someone who’s survived extraordinary victimization and typecasting and who’s managed to redefine how she’s perceived. (Whether steadfast defender of Julian Assange trumps Baywatch babe depends on your worldview, I guess.) But the series, which so often feels like it’s trying to atone for our old mistakes, seems intent on pointing out ethical transgressions while looking right past the notable void at its own core.