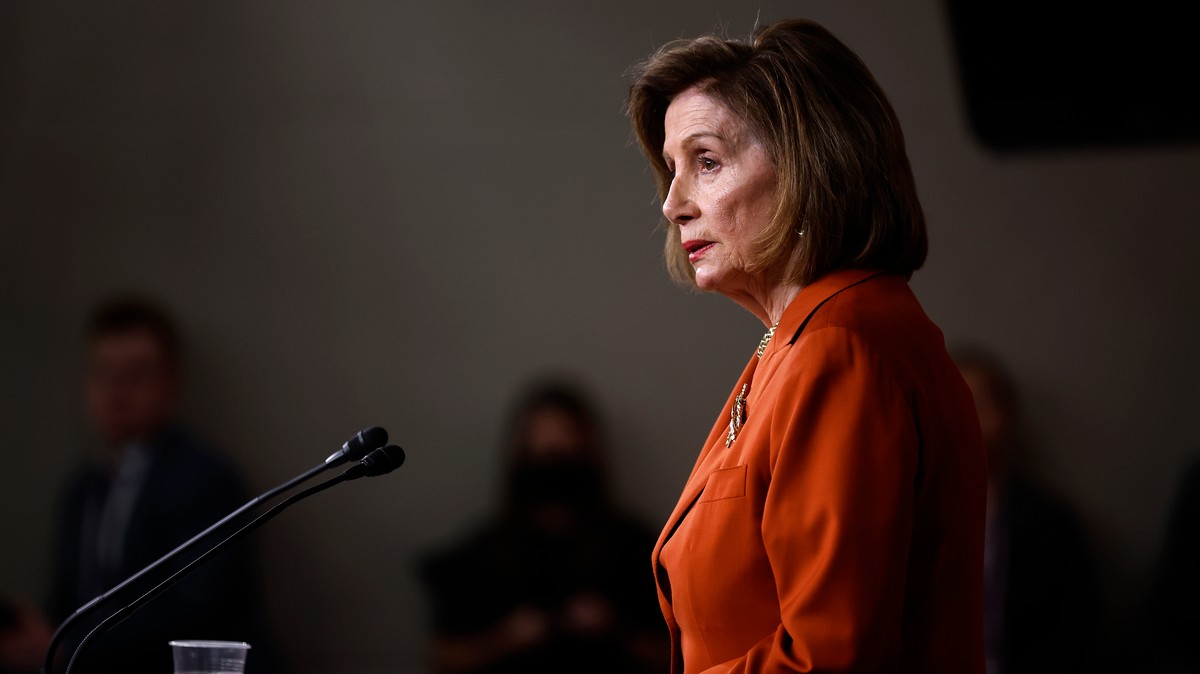 Speaker of the House Nancy Pelosi (D-CA) talks to reporters minutes after the U.S. Supreme Court struck down Roe v Wade, which guaranteed a woman’s right to an abortion, in the Capitol Visitors Center on June 24, 2022 in Washington, DC. (Chip Somodevilla/Getty Images)

After the Supreme Court killed the national right to have an abortion while nodding toward its intention to further attack bodily autonomy as a human right, leading Democrats responded by begging for money, reading poems, and singing “God Bless America.”

The decision in Dobbs to overturn nearly 50 years of precedent and once again give repressive state legislatures the right to ban abortion and other forms of reproductive health care was made possible by the three newest Supreme Court Justices, all of whom were nominated by former President Donald Trump: Amy Coney Barrett, Brett Kavanaugh, and Neil Gorsuch. While most Democrats voted against those justices, conservative West Virginia Democrat Sen. Joe Manchin voted to confirm both Kavanaugh and Gorsuch.

On Friday, following the decision, Manchin confirmed he had been taken for a ride when he voted for two conservative judges with the understanding that they wouldn’t overturn Roe v. Wade, since both of them called it a “precedent” and Kavanaugh referred to it as a “precedent on a precedent” after the Planned Parenthood v. Casey decision in 1992. Manchin also said that he’s personally “pro-life,” but repeated his “support” for codifying the protections of Roe into law—although in May, he opposed a bill to do exactly that.

“I trusted Justice Gorsuch and Justice Kavanaugh when they testified under oath that they also believed Roe v. Wade was settled legal precedent and I am alarmed they chose to reject the stability the ruling has provided for two generations of Americans,” Manchin said.

While Democrats broadly rejected the ruling, however, they chose some bewildering ways to register their disapproval. As protesters rallied at the Supreme Court, House Democrats stood on the steps of the Capitol and sang “God Bless America,” the worst possible version of the band that kept playing as the Titanic sank.

Prior to the decision, House Speaker Nancy Pelosi repeatedly said the Democratic party should have no “litmus test” on abortion. She endorsed and donated to the campaign of Texas Rep. Henry Cuellar, the House’s last vocally anti-abortion Democrat, as he barely fought off a primary challenge this month from progressive pro-choice lawyer Jessica Cisneros.

So how did Pelosi respond to the Dobbs ruling? At her first press conference after the decision, she read a poem. And it wasn’t even a new poem, but the same one she read after Jan. 6.

Meanwhile, Rep. Jim Clyburn, the third-ranking House Democrat—whose job in leadership is to rally and count votes for Democratic causes, and who not only endorsed Cuellar but actually went to Texas to campaign for him in the race’s final days—was very underwhelmed by the Dobbs decision.

“It’s a little anticlimactic, I think we all expected this,” Clyburn told CNN just minutes after the ruling. “And I’m hopeful, you know I have to read the decision to see exactly the extent to which we can move legislatively to respond to it.”

Rep. Andy Levin, a Michigan Democrat, posted a tweet of himself doing yoga, while acknowledging the Dobbs decision and congratulating himself for voting to pass last week’s gun control bill. Levin later deleted the tweet.

And since it wouldn’t be a crisis without an opportunity to raise campaign cash, leading Democrats and Democratic candidates almost immediately started sending pleas to potential contributors. “Our ONLY option is to marshal a response so historic – 100,000 gifts before midnight – that we DEFEAT every anti-choice Republican that made this happen, EXPAND our Majorities, and FINALLY codify our reproductive rights into law,” said a text from Pelosi’s campaign to potential “pro-choice champions” Friday.

(While Democrats have passed a bill codifying Roe in the House, Manchin’s opposition to the bill and other Democrats’ opposition to ending the filibuster means this will likely be Pelosi’s second stint as Speaker without those protections passed.)

A protester at the Supreme Court Saturday spoke for millions when she voiced her frustration at the Biden campaign for sending a fundraising text after the decision.

“I received a text message from Joe Biden’s campaign yesterday saying that the Supreme Court had overturned Roe v. Wade and that it was then my responsibility to then rush $15 to the Democratic national party, and I thought that was absolutely outrageous,” protester Zoe Warren said.

“My rights should not be a fundraising or campaigning point. They have had multiple opportunities to codify Roe into law over the last 20, 30, 40, 50 years, and they haven’t done it. If they’re going to keep campaigning on this point they should do something about it.”

Biden, who while serving in the Senate voted for a bill that would have ended Roe v. Wade and repeatedly backed a ban on federal funds for abortion before renouncing his support during the 2020 Democratic primary, said Friday his administration would fight any efforts to prevent people from traveling across state lines to obtain an abortion. He called the decision a “sad day for our country.”

Biden also pleaded for “peaceful” protests in the wake of the decision, as riot cops marched to the Supreme Court.

There were numerous reports over the weekend of attacks on pro-choice protesters by both civillians and police, LAPD officers shoving actress Jodie Sweetin to the ground in Los Angeles.

A minority of prominent Democrats called on their party to aggressively fight the Dobbs decision, and the near-certain flood of anti-abortion laws coming in its wake. The Democratic governors of the West Coast states released a video pledging to make their states sanctuaries for people seeking abortions. “We will resist intrusions by out of state prosecutors, law enforcement, or vigilantes trying to investigate patients receiving services in our states,” Oregon Gov. Kate Brown said.

Rep. Alexandria Ocasio-Cortez, meanwhile, called for the impeachment of Supreme Court justices, alleging Kavanaugh and Gorsuch lied under oath, as well as expanding the court and restraining judicial review. She also demanded that Biden to take a more active role in protecting abortion rights in red states.