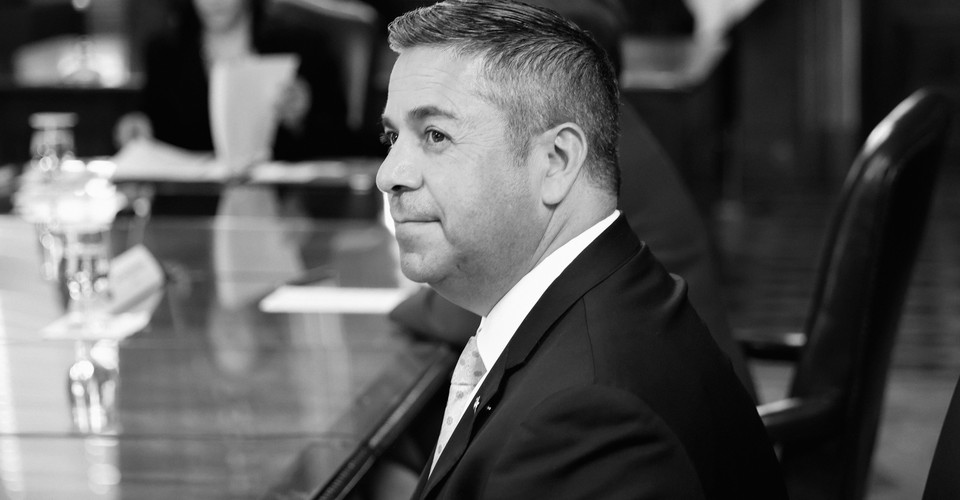 Justice Stephen Breyer hadn’t even made his retirement official last week when Democrats put out word that they wanted to confirm his replacement as fast as possible. According to one report, they wanted to match the record speed with which Republicans installed Amy Coney Barrett on the Supreme Court following the 2020 death of Justice Ruth Bader Ginsburg. The reason for the Democrats’ rush wasn’t immediately apparent. Breyer doesn’t plan to leave the bench before the end of the Court’s term, in nearly five months, and the justices don’t meet over the summer. The midterms are still eight months away.

Yesterday, however, Democrats received troubling news that made their initial sense of urgency much easier to understand: Senator Ben Ray Luján, a Democrat from New Mexico serving his first term, had suffered a stroke that required surgery to relieve brain swelling. Fortunately, Luján’s office reported that doctors believe he’ll make a full recovery. Barring complications, the senator could return to work in four to six weeks, a senior Luján aide told me. Until he does, the Democrats’ bare majority is functionally no majority at all. Unlike in the House, senators are not allowed to vote by proxy. With just 49 members of the Democratic caucus available, the party won’t be able to do anything of significance without help from Republicans, whether that’s passing legislation or confirming a new Supreme Court justice.

Luján’s absence may not make a ton of difference. Although Barrett took her seat on the bench just 27 days after her nomination by President Donald Trump, Democrats aren’t likely to move quite that quickly, giving Luján more time to recuperate. And President Joe Biden’s eventual nominee might secure a few GOP votes, especially because the pick won’t dent the conservatives’ 6–3 ideological advantage on the Court. But for the time being, Biden’s Build Back Better plan is even more “dead” than Senator Joe Manchin of West Virginia declared it yesterday morning, a few hours before Luján’s hospitalization became public.

Democrats, of course, needed no reminders of the limits of their power. They had learned that lesson well enough after Manchin cut off negotiations over Biden’s top priority in December, and again after he and Senator Kyrsten Sinema of Arizona thwarted the party’s effort to change Senate rules and pass voting-rights legislation last month. In some ways, Democrats have been lucky that until this week, their ambitions have been stymied by simple politics rather than the vagaries of fate in the world’s most deliberative gerontocracy.

Read: Why Biden had no other choice on voting rights

COVID-19 has taken the lives of two House members (one, the Republican Luke Letlow, died days before he was to take office) but has spared the Senate; though the coronavirus has infected numerous senators over the past two years, absences have only briefly threatened Senate business. Before the pandemic hit, however, health-related absences—or worse—have occurred in the Senate almost every year. In 2017–18, Republicans saw two of their members, Senators Thad Cochran of Mississippi and John McCain of Arizona, miss stretches of time because of illness; Cochran resigned midway through his term in April 2018, and McCain died in office of cancer later in the year. In 2019, GOP Senator Johnny Isakson of Georgia resigned because of Parkinson’s disease.

Democrats experienced plenty of tragedy themselves the last time they held the majority. From 2009 to 2013, four Democratic senators—Edward Kennedy of Massachusetts, Robert Byrd of West Virginia, Daniel Inouye of Hawaii, and Frank Lautenberg of New Jersey—died in office. As uncouth as it may be to acknowledge the political impact of the loss of someone’s life, Kennedy’s death from brain cancer in 2009 ultimately deprived Democrats of their filibuster-proof 60th vote when the Republican Scott Brown won a special election for his seat the following January.

At 49, Luján is younger than all but five Democratic senators, although he is roughly the same age that Senators Tim Johnson, a Democrat of South Dakota, and Mark Kirk, a Republican of Illinois, were when they suffered strokes in 2006 and 2012, respectively. Both missed several months before returning to the Senate. Democrats understandably expressed far more concern for Luján’s health and recovery yesterday than for the impact his absence could have on the Senate over the next weeks and months. “All of us are hopeful and optimistic that he will be back to his old self before long,” Majority Leader Chuck Schumer said in a floor speech this morning. “In the meantime, the U.S. Senate will continue to move forward in carrying out its business on behalf of the American people.”

Happenstance is a powerful force in American history, and never more so than in periods of deep division. Had Ginsburg lived just four months longer, a justice far more progressive than Barrett would likely have a lifetime seat on the Supreme Court. Exactly how progressive the next justice is could similarly depend on when Democrats regain their 50th vote. The sad news they received yesterday underscored the fact that their Senate majority is both exceedingly thin and fragile, and that not only an election can wipe it away.