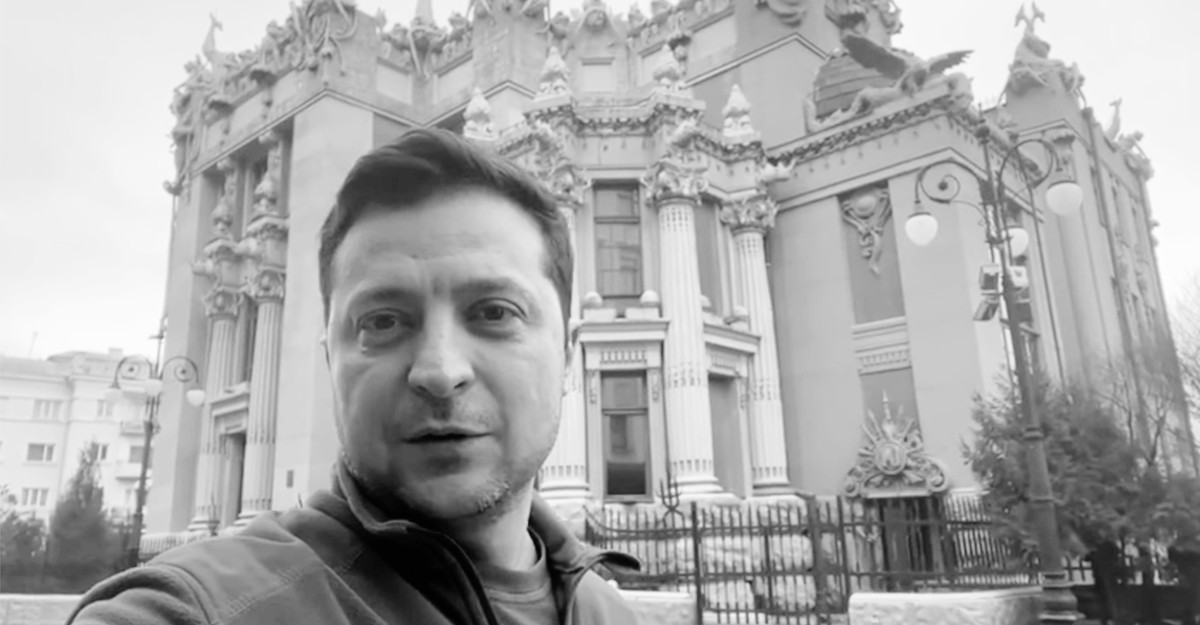 The camera moves, but only a little. The man in the foreground, filming, wears a jacket of olive green. The men around him do too. Their expressions are grave. They stand close, arranged in the scrunched togetherness of the group selfie. If you happened to encounter their video as one of many across a feed—a group of guys, a bit blurry in thumbnail form, poorly lit against the night—you’d probably not realize what you were witnessing: a president and his cabinet, outmatched but outspoken, declaring their defiance in the face of an invasion. You’d probably not realize the deep significance of the refrain Ukrainian President Volodymyr Zelensky repeats throughout the 32-second video that doubles as a state-of-the-union address: Тут—tут—tут. Here—here—here.

The video, shot late Friday in Kyiv, is most urgently a piece of evidence: proof that Zelensky and members of his cabinet were, as of its filming, still in Kyiv and still alive. Its footage testifies against the rumors that the president had fled his city and his country. He hadn’t. And, he keeps saying, he won’t. Statecraft, often, is stagecraft; Zelensky, who rose to prominence as an actor, comedian, and producer, understands that better than most. But Russia’s invasion of Ukraine has turned the president into a performer of a different kind. Zelensky has been using videos, brief and self-shot, not only to document his continued presence in Kyiv, but also to rally his constituents to stay with him, and to fight. “This is our land, our country, our children,” he says in a video posted Saturday morning. “And we will defend all of this.”

The videos, in that sense, are presidential speeches of last resort. They are attempts to preserve the first thing attackers will try to destroy, when they attack: the lines of communication. The videos summon, in their terse messaging, the grim solidarity of emergency. Last week, 43 million people who had been going about their lives found themselves at the sudden mercy of a man stationed hundreds of miles away. The citizens of Ukraine are vulnerable. What Zelensky’s videos announce, above all, is that their leader has chosen to be vulnerable along with them.

“This might be the last time you see me alive,” Zelensky reportedly said during a video conference with European Union leaders on Thursday night. He was not indulging in melodrama. One of Russia’s reported objectives in its invasion of Ukraine is to “decapitate” the country’s government, as the graphic euphemism goes; the U.S. State Department has warned that Zelensky is a “prime target for Russian aggression.” Many leaders who have found themselves in Zelensky’s position have left their respective capitals, either to lead remotely or simply to flee the threat of violence: Just as there are no atheists in foxholes, there are few true “men of the people” when the tanks are coming and the missiles are dropping and the men in question have access to private jets. And yet there Zelensky is—a figure who came to the presidency as a relative outsider now remaining, by choice, inside the country. As my colleague Franklin Foer put it, “It is hard to think of another recent instance in which one human being has defied the collective expectations for his behavior and provided such an inspiring moment of service to the people, clarifying the terms of the conflict through his example.”

And he is setting that example using the only medium that people in a crisis might hope to have available to them: a phone, connected to a feed. Zelensky’s videos feature no teleprompters, no camera crews—no part of the apparatus typically associated with power as a theatrical production. In the one he took Friday night, the thick glare of streetlights, behind the gathered leaders, slices through several frames. At one point in the same video, Ukrainian Prime Minister Denys Shmyhal holds up his phone toward the camera to display its lock screen’s time stamp. The move recalls the way hostages are made to display the day’s newspaper to prove their images’ currency. But Shmyhal’s version is not an act of capitulation. It is an act of defiance. As of Friday evening, the heads of the democratically elected government of Ukraine were still alive, and still in power, and still vowing to resist. “We are all here,” Zelensky said. “Our soldiers are here. The citizens of the country are here.”

The paradox of authenticity, in electoral politics, is that the minute you work to embody it, you’ve already lost the bid. But Zelensky’s videos flip the script. He speaks in blunt sentences that might, in other contexts, be understood as cynical sound bites. (“I am here. We are not putting down arms,” he says in one.) Holding the camera, he looks straight into the lens, conversing with the viewer, seeming to nullify the distance between himself and his audience. He looks weary. He looks angry. But he does not look defeated. He looks, in short, the way many of his constituents do right now. Ukraine, Zelensky said in a speech on Thursday, has been “left alone in defense of our state.” This is another message embedded in the president’s display of reluctant valor: He would prefer to have help in the fight.

As an actor, in the sitcom Servant of the People, Zelensky played a regular guy who was elected to the Ukrainian presidency after an ad hoc rant he delivered went viral on social media. As the actual president, Zelensky has been used to leveraging the web’s power to communicate and persuade. He shot videos while driving through Kyiv, and while walking on a treadmill, and while ordering at a McDonald’s drive-through. The stunts prepared him for this solemn new stage. Zelensky’s latest videos frame him in stark contrast to Ukraine’s aggressor: Here is Zelensky, on the streets and in danger; there is Vladimir Putin, pulling history’s levers from afar, removed from the violence and unaccountable for it. Before the invasion, the Kyiv resident Nazar Cherniha told The Washington Post that he was “not a fan” of Zelensky. But now he is a supporter. The president’s videos, Cherniha said, are “a very good sign we are all together.” In war’s chaos, after all, few statements are as powerful as the one Zelensky has been delivering, to his people and to the world: I’m still here.