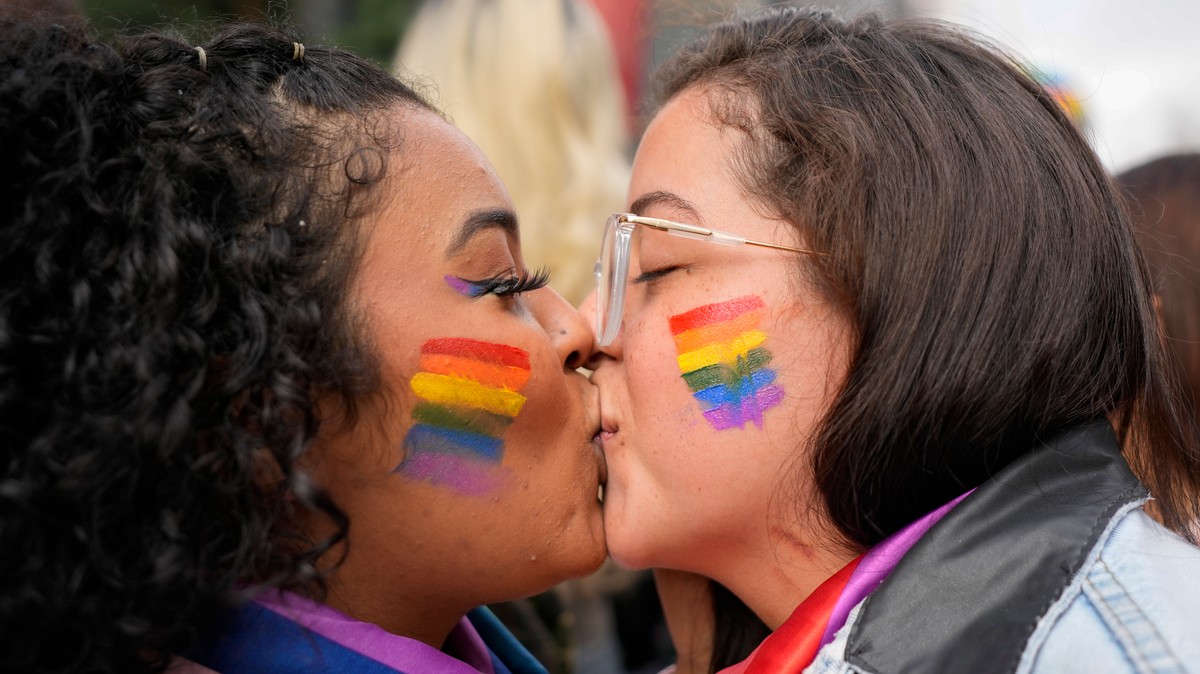 Pride month events around the country are stepping up security alongside a wave of attacks and violent threats from far-right extremists and a surge in anti-LGBTQ rhetoric from the GOP.

In Tulsa, Oklahoma, Pride marshalls are taking active shooter training for the first time as part of their preparations and have introduced new restrictions on bags people can bring into the main event. And Chicago’s police superintendent recently said at a press conference that officers from the Joint Terrorism Task Force were working with the FBI and other federal agencies to gather intelligence and monitor for threats, particularly coming from individuals on watchlists, ahead of the upcoming Pride Parade.

For many cities, Pride festivities are resuming for the first time following a two-year hiatus due to COVID. But what should be a celebrated return to business as usual has been hampered by the current climate of threats.

Earlier this month, 31 members of white nationalist group Patriot Front were arrested in Coeur d’Alene, Idaho, piled into a U-haul on their way to disrupt an annual Pride event, according to police. In recent weeks, neo-Nazis have circulated a video showing an anonymous person smashing a shop window featuring a Pride flag, that bears the caption “Do not tolerate evil.”

And a man in Whidbey Island, Washington, was arrested on charges of civil rights malicious harassment with a hate crime enhancement after his queer neighbor raised the alarm about his violent anti-LGBTQ social media posts, including ones that referenced upcoming pride festivities and direct threats toward her.

The current intensity of anti-LGBTQ rhetoric and activism has been fueled, in part, by the mainstreaming of “groomer” conspiracies, which traffic in tired tropes about the LGBTQ community and sexual predation, specifically on children. Far-right forums are also awash in violent rhetoric likening Pride events to satanic rituals and saying members of the LGBTQ community should be hanged.

Drag Queen Story Hours have been the latest target for this moral panic; proponents of anti-grooming rhetoric baselessly claim that those events are inherently sexual and therefore not appropriate for children. Earlier this month, uniformed members of the Proud Boys stormed a Drag Queen Story Hour in California’s Bay Area shouting homophobic and transphobic slurs: One of them wore a T-shirt with the words “kill your local pedophile.”

In some cases, organizers of Pride festivities have had to weigh the risks of possibly antagonistic counter-demonstrators and violence, with the optics of adding more law enforcement to their events. Police involvement in Pride events is a controversial topic, given that the month of June is meant to commemorate the LGBTQ civil rights movements and offer a reminder of the brutality activists endured at the hands of police during the Stonewall Riots, which were a series of protests by the gay community in New York City during the summer of 1969.

One group organizing a Pride event in Austin, Texas, were initially wary about making contact with police but was revisiting that plan following the Patriot Front arrests in Idaho, according to the Texas Tribune.

While it’s not particularly new that the far-right espouses homophobic or transphobic views, it is remarkable how the entire Right—from neo-Nazis, nationalist street gangs, and militias, to QAnon conspiracy theorists, Fox News, and the GOP—have coalesced with such uniformity around anti-LGBTQ rhetoric. The cohesion has created a dangerous environment, where fringe actors may feel empowered to commit acts of violence in the name of the bigotry they see or hear from “legitimate” sources, such as members of Congress or cable news.

Anti-LGBTQ sentiment and rhetoric has also taken hold in mainstream GOP politics. State legislatures filed more than 240 bills targeting the LGBTQ community this year, the majority of which take aim at trans youth. Late last month, Rep. Marjorie Taylor Green baselessly claimed that straight people were at risk of extinction and said that Pride month “needs to end.” The Texas GOP adopted a new platform over the weekend that deems homosexuality as “abnormal” and vows to oppose “all efforts to validate transgender identity.”