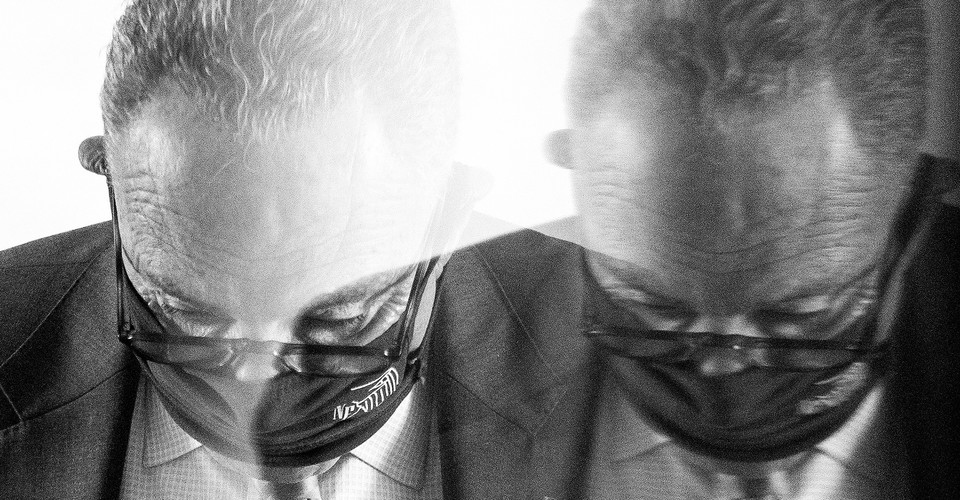 This week, several high-profile Republicans have suddenly become interested in reforming the infamously incomprehensible Electoral Count Act of 1887, which lays out the process for certifying the results of presidential elections. Most prominent among them is Senate Minority Leader Mitch McConnell, who, in his typically animated way, said Wednesday that the law “obviously has some flaws. And it is worth, I think, discussing.” His whip, Senator John Thune, also said members of the caucus are open to the idea. Yuval Levin, a very influential policy voice among establishment Republicans, backed the idea in a New York Times column, as have some other conservative outlets.

Democratic leaders’ response has been extremely chilly. “It’s not a solution to the problem at hand, which is that right now in the United States of America, we need federal laws that guarantee the freedom and right of every American to have access to the ballot, to be able to vote,” Vice President Kamala Harris told PBS NewsHour. A White House spokesperson said that two Democratic bills already under consideration, “the Freedom to Vote Act and the John Lewis Voting Rights Advancement Act, are essential for protecting the constitutional right to vote, the rule of law, and the integrity of our elections … There is no substitute. Period.” Senate Majority Leader Chuck Schumer appears to be one of many Democrats who view the GOP’s openness on ECA reform as a ploy for splitting Democrats.

The Democrats have a point. ECA reform alone is a narrow fix, insufficient for the many problems in the voting system. Republicans’ new rumblings about reform may just be a cynical feint. But Democrats should take the offer to fix the ECA anyway.

“Democrats and Republicans need to come together and pass legislation that targets the risk of election subversion,” Rick Hasen, an election-law expert at UC Irvine, told me. “It’s even more urgent than voter suppression, which is a real problem. Voter suppression is a problem, but a bigger risk we face is that election losers could be declared winners, and that’s at the top of my list.”

The Electoral Count Act was a subject of concern—and machinations—before January 6, 2021. Enacted largely in response to the contested 1876 presidential election, the law was designed to make sure that a process was in place for certifying winners of presidential races. The law’s ambiguous language was a target of derision almost from the start—a year after its passage, a political scientist called it “very confused, almost unintelligible.” A few lawyers, including John Eastman, a Donald Trump ally who helped design the paperwork coup, believe it is unconstitutional.

In most presidential elections, when the outcome has not been in doubt, the ECA’s flaws have not been an issue. But the 2020 election spotlighted the flaws, including vagueness about what, if any, power the vice president has beyond the ceremonial. At worst, the law could offer an opening for Congress to reject duly chosen electors and ultimately install the election’s loser as president. Prudent reform might clarify exactly the vice president’s role, as well as make explicit—and limited—the ability of Congress to challenge or reject electors except in extreme circumstances.

Democrats widely agree about the dangers lurking in the ECA (though as my colleague Russell Berman reported last year, some liberal scholars are wary of restraining the powers of a vice president, lest Kamala Harris need the chance to block Trumpist chicanery after the 2024 election). But they want to see ECA reform tied up with other changes, including rules against gerrymandering, rules against measures that make voting harder, campaign-finance reforms, election-security tweaks, and an update and revival of key elements of the Voting Rights Act.

Read: It’s time for Democrats to break the glass

The logic behind this coupling is simple—all of these ideas relate to elections, one way or another—and politically clever. By bundling them all together, they want to create a package that offers something for everyone, giving members who might be lukewarm about one provision another one to like. If ECA reform, with its bipartisan support, is handled through a separate process, leaders worry the chances for broader legislation will diminish.

This is a reasonable concern if you believe the broader bills have any chance at all. But the prospects of the Senate passing either the John Lewis Voting Rights Act, which the House passed in August, or the Freedom to Vote Act, which sits in the Senate, are extremely dim. The stumbling block, as ever, is the filibuster and the moderates who defend it. Democrats have 50 co-sponsors for the Freedom to Vote Act, including Kyrsten Sinema and Joe Manchin, and the John Lewis Voting Rights Act, which both Sinema and Manchin support. But they don’t have the 60 votes they need for cloture on the bills, and they don’t have any realistic path to getting there.

As 2022 starts, Democrats are newly excited about the prospect of persuading Manchin or Sinema to embrace limited changes to the filibuster purely for voting-rights bills. Moderate Democrats have just launched yet another effort to cajole Manchin. Party leaders think McConnell is dangling ECA reform now just to keep Manchin from getting on board, and maybe he is. But c’mon: We’ve been here before. Manchin has a tendency to speak off the cuff and deliver remarks ambiguous enough to get hopes up, but he never goes further. The West Virginian continues to be skeptical of any changes to the filibuster, bluntly rejecting them in his more emotional moments and never budging in his more laconic ones. Sinema is less talkative but equally immovable. This means the likely choice for Democrats is to get ECA reform and not the other voting bills, or to get neither.

Some ECA-reform advocates worry that even if Schumer was somehow able to get Manchin and Sinema to agree to sweeping reforms, including ECA updates, and pass them through the Senate on a party-line vote (with Harris’s tiebreaker), it would be a Pyrrhic victory. Edward Foley, a law professor at Ohio State University who has been one of the leading proponents of ECA reform, told me that the most important characteristic of ECA reform is not any of the details but that it be enacted with buy-in from both parties, so that both parties feel more bound to it come the next presidential certification.

“The method the Democrats are pursuing is this unilateral Democratic modification of the filibuster to then get Democrat-only votes for electoral reform,” he said. “That frankly is the kiss of death for ECA reform for this reason: Whatever else you think about other reforms, ECA reforms cannot be done by either party unilaterally, because the opposite party’s not going to accept that if it happens to be in power on January 6, 2025.”

Perhaps Foley is too optimistic about the prospects for Republicans following even their own ECA reforms, but if the alternative is to leave a menacing law in place, the gamble seems worth taking. And time is of the essence: The sooner the 2022 midterm election gets, and the more confident Republicans get of their chances of victory, the harder it will be to make any changes.

If Schumer accepts ECA reform at the risk of the John Lewis Voting Rights Act and the Freedom to Vote Act, many in his party will pillory him for abandoning reforms that would protect the voting rights of Black Americans, Democrats’ most important bloc of voters. The charge is fair, and not passing either of these bills is an awful outcome as a matter of both governance and politics. But that disaster has already happened. The party began unified control of Congress by pushing the For the People Act, a sprawling and flawed messaging bill that leaders had no realistic plan to pass. The Senate then got bogged down for months in infrastructure negotiations that produced one very large package but has failed (so far) to produce a second, huge one. The reason the party finds itself in the current dilemma is that it never bothered to come up with a serious approach to combatting voter suppression.

“However well intended or even needed, clarifying the language of the ECA would not deal with the democracy crisis that our nation is facing,” Fred Wertheimer and Norm Eisen, two reform advocates, wrote in The Washington Post on Thursday. “We need voting rights reforms first and foremost.” They are right that ECA reform would address only some narrow problems, but if Democrats can’t get everything they want, they shouldn’t foreclose the opportunity to get something.

That doesn’t mean they should accept anything. McConnell hasn’t made clear what sorts of ECA reforms he’d be willing to entertain, and a proposal that ties Harris’s hands in 2025 without any kind of restraints on Congress as well might in fact be worse than nothing. House Democrats are working on a proposal of their own, but Republicans have been vague thus far. The only way to know what is possible is to negotiate, and if McConnell offers a flimsy proposal and is shown to be bluffing, it might even help Schumer win Manchin over to some sort of filibuster carve-out. That’s unlikely to get the Freedom to Vote Act across the finish line—but no less likely than any scenario that involves Manchin and Sinema coming around to filibuster reform.