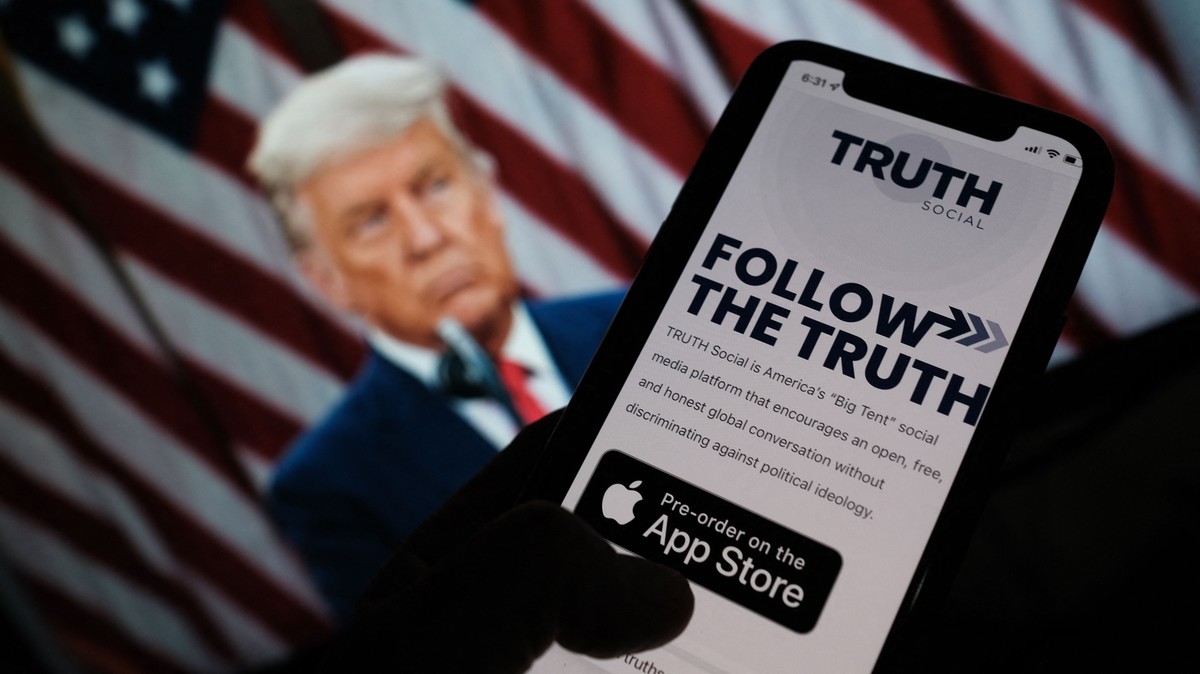 Over a year after being kicked off Twitter and Facebook, Donald Trump is finally back on social media, on the Truth Social platform he has launched himself.

But the problem for the former president is that very few people will be able to see what he is saying.

Truth Social was launched on Monday morning to coincide with Presidents Day, but it appears the developers of the platform still have a lot of work to do.

The app is not available on Android phones. It is not available outside the U.S. There is no web version of Truth Social, and even those few iPhone users who have been able to get the app to download have been greeted with error messages and very long waiting lists.

Truth Social is described by those behind it as a “Big Tent” social media platform that “encourages an open, free, and honest global conversation without discriminating against political ideology.”

The app went live on the Apple App Store in the early hours of Monday morning, but almost immediately those trying to download it reported getting a “something went wrong” message when they tried to create an account.

Those who persisted and managed to get through the account creation process were not greeted with the Truth Social interface—which looks almost identical to Twitter—but with a message telling them where on the waiting list they were.

Users were greeted with the following message: “Due to massive demand, we have placed you on our waitlist. We love you, and you are not just another number to us, but your waitlist number is below.”

Messages posted on Twitter indicated that hours after it launched, prospective users were at the bottom of a list with over 161,000 people on it. Indeed, some users reported that having initially been told they were close to the top of the waiting list were subsequently dropped down the list.

But aside from the system’s inability to register any new users, Truth Social also encountered some other issues, including the fact that it may have to redesign its new logo.

One eagle-eyed person spotted that the new logo for Truth Social bore a striking resemblance to one used by a British “fleet telematics and fuel efficiency” company Trailar.

“Based on recent news brought to our attention by various media outlets, showcasing the similarities between our own Trailar logo and the Truth Social logo, we are now seeking legal advice to understand next steps and options available to protect our brand,” Matthew Summers, head of marketing for Trailar told VICE News.

Hours prior to the official launch of the app, the Daily Dot discovered yet another security flaw in the beta version of the app, allowing anyone with the web address to register an account.

The beta version was being used internally by the developers at Trump Media & Technology Group (TMTG) to test out new features. The Daily Dot however was able to register the @realDonaldTrump account and discovered one account which appeared to be dedicated to sharing content in favor of Chilean dictator Augusto Pinochet.

The company’s inability to secure access to its platform is just the latest security failure. Hours after Trump announced the name of his new platform last October, the site was briefly live and quickly discovered by hackers who were able to register an account pretending to be Donald Trump and post a picture of a pig with swollen testicles taking a dump.

The limited rollout of Truth Social on Monday is in keeping with comments made by TMTG’s CEO Devin Nunes, who told Newsmax earlier this month that the platform may not be fully available until the end of March.