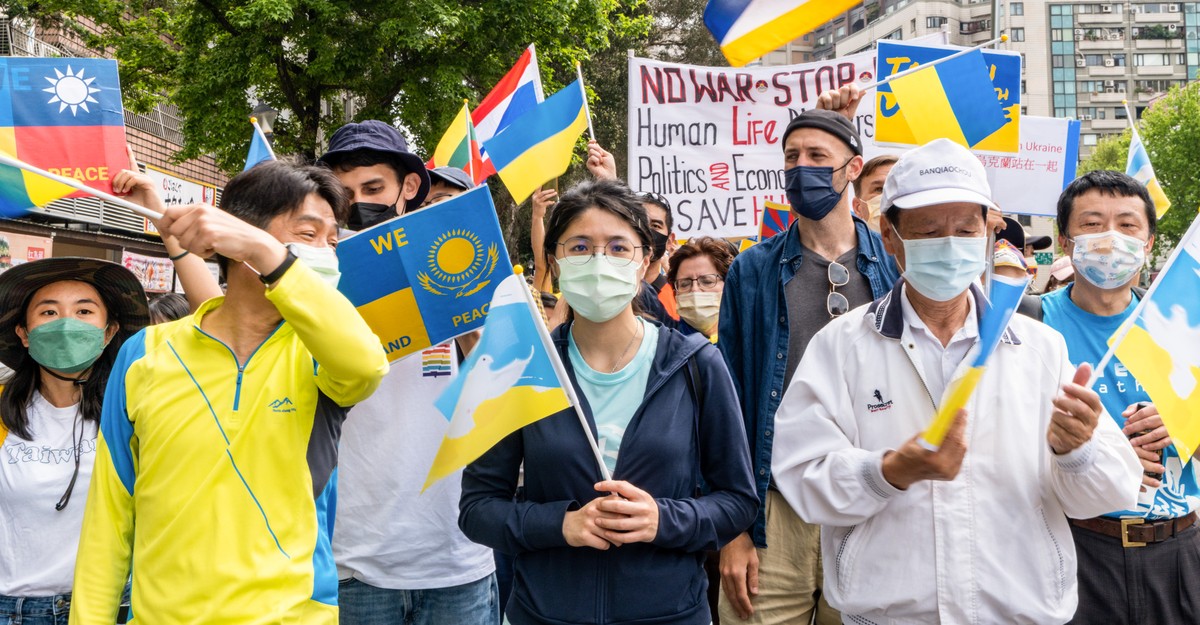 The more I’ve gotten to know her, the more I’ve come to think that Wang Tzu-Hsuan exemplifies some of the best qualities of the younger Taiwanese I’ve met here in Taipei: open-minded, serious but not too serious, spontaneous, and thoughtful. At 33, she is unlike most surgeons in Taiwan—who are typically older, and male—and while many of her medical-school classmates sought more lucrative careers in the United States, she opted to stay, out of a sense of duty. When she’s not busy in the operating room or meeting with patients, we catch up over food or drinks and talk about what’s happening in the world, which for us in Taiwan, where pandemic rules still bar foreign visitors, feels quite far away.

I was taken aback when Wang told me over dinner at a local Japanese-style izakaya restaurant that she’d decided to broaden her skill set from her usual thyroid, liver, pancreatic, and intestinal surgeries to include trauma—namely bullet and shrapnel wounds. Gun and bomb violence are almost nonexistent in Taiwan, but having spent her whole life unworried about the possibility of China attacking her homeland, she said she had begun to think about how she could help if the worst happened. “Although the threat from China has always been there,” she said, “it has also always seemed so distant for us.”

Not anymore. Seeing the devastation that Russian bombs and missiles have wrought upon once-tranquil Ukrainian cities spurred Wang to approach local volunteer groups to figure out how to prepare a generation of surgeons who have never experienced war for the realities of conflict. The Chinese Communist Party seeks to annex Taiwan, which it claims despite having never ruled it, and eliminate Taiwanese identity. With a densely concentrated population roughly the size of Florida on a mostly mountainous island that is little bigger than Maryland, any invasion attempt by China would incur substantial civilian casualties.

Wang is not alone, either. Many Taiwanese are looking at Ukraine’s current reality as something that could befall their homeland. A number of Taiwanese friends and interviewees have told me they’d stay and fight, while others have described family plans to secure citizenship elsewhere, just in case. The former commander of Taiwan’s military has called for the formation of a territorial defense force to deter China’s ambitions. The war has intensified political discourse too, and Taiwanese politicians are using it to rationalize their views of China: For President Tsai Ing-wen’s Democratic Progressive Party, it justifies the past five years of buying weapons from the U.S. while expanding largely unofficial diplomacy with other democracies; for many members of the opposition party Kuomintang, an on-and-off frenemy of the Communists over the past century, heightened concerns over an invasion attempt by Beijing highlight the risks of getting too close to Washington.

Both Taiwan and Ukraine democratized in the 1990s, following years of brutal authoritarian rule. Today these two young democracies, as well as those in Central and Eastern Europe—who share similar histories—are most directly affected by Russia’s and China’s expansionist pushes. Whereas the “threat to democracy” posed by the Beijing-Moscow alliance is more ephemeral in older and more established democracies such as the United States, Britain, Germany, France, and Japan, in Ukraine it is manifested in widespread death and destruction. In Taiwan and the European countries of the former Soviet bloc, it is viscerally unsettling.

Indeed, if there is a front line in the emerging global standoff between democracy and autocracy, it lies at the borders of these younger democracies, where peoples and governments are changing their behavior in real ways and making tangible sacrifices to maintain their freedoms—from a peacetime surgeon in Taiwan preparing to deal with conflict, to countries adjoining Ukraine donating weapons to aid the fight against Russia.

Whether Ukraine and Taiwan get the support they need to remain sovereign is likely to be a defining geopolitical question of this generation, extending beyond regional political dynamics. Countries in both Europe and Asia appear to see this clearly now—note how quickly the Biden administration enlisted Asian allies such as South Korea, Japan, Taiwan, and even Singapore to sanction Russia over its invasion of Ukraine. Their willingness to show concern about faraway Ukraine suggests that they think one day they could be looking for similar support from Europe, should China enter into a conflict with one of them.

The revanchist violence that Vladimir Putin has unleashed on Ukrainians has yet to come to Taiwan, but it has jarred the collective consciousness nevertheless. There have been multiple protests outside the de facto Russian embassy in Taipei, a solidarity march through the center of the capital, and a rush to send money and nonmilitary aid to Ukraine. Tsai’s move to sanction Russia and cut it off from crucial Taiwanese semiconductors is perhaps the most confrontational she’s been with any major power. (For his part, Putin declared in a joint statement with President Xi Jinping on February 4 that Russia considers Taiwan “an inalienable part” of China.)

Just as much as Russia’s invasion of Ukraine has stoked fears here in Taiwan that a Chinese attack might be more a matter of when than if, the whole-of-society Ukrainian response has also inspired Taiwanese to think that, should Xi make a move, it wouldn’t necessarily end in Chinese victory. “I think Ukraine has shown us all a lesson that people in their own countries have to be willing to fight for their democracies and freedom, if it really comes down to it,” Albert Wu, a historian who relocated back from Paris last year, told me. “Their bravery and resistance has been a real inspiration to us all.”

Ukrainians I know who live here have made similar observations. “I hear from Taiwanese friends saying that Ukraine is currently fighting for Taiwan as well, and that means a lot,” Oleksander Shyn, a university student living in Taipei, told me. “Because if Ukraine loses, and if the Ukrainian people end up in Putin’s hands, it might inspire China to do this here. So while most people around the world are wishing us peace, many Taiwanese people are wishing us victory.”

The Russian invasion has awoken many of Taiwan’s leaders and its people from a collective slumber, a less-than-urgent attitude toward the threat from Beijing rooted in decades of a poorer China being ill-equipped to pull off what would be the largest amphibious invasion ever. But China’s rapid economic development, and consequent naval buildup, is tipping the scales in Beijing’s favor.

Last month, Taiwan’s defense minister, Chiu Kuo-cheng, proposed extending military conscription for men from the current four months to one year. In a mid-March survey by the Taiwan Public Opinion Foundation, 75.9 percent of respondents supported the idea. One senior legislator from Tsai’s ruling party has floated the idea of mandating conscription for Taiwanese women for the first time.

Thinking has been changing at the diplomatic level too, with a growing awareness in Taiwan and the countries of Central and Eastern Europe that the threats they face are part of a global struggle. In recent months, Taipei has seen a flurry of visits from lawmakers from Lithuania, Slovenia, the Czech Republic, Slovakia, Estonia, and Latvia, all of whom became democracies in the 1990s after being controlled by Moscow. Alongside those was a visit from Jakub Janda, a Russia expert who arrived here late last year from Prague. The 31-year-old Czech think-tank director and reservist’s mission: to establish a Taipei office for the European Values Center for Security Policy, founded in 2005 to protect Czech democracy. Now back in Prague, Janda told me that the struggles against Russian expansionism in Europe and Chinese expansionism in Asia have converged. After the initial Russian invasion of Ukrainian territory in 2014, Janda said, his think tank’s focus shifted to protecting European democracy from Russia. By 2018, Beijing’s growing influence in Central Europe led the center to include China in its remit.

Today it is clear, Janda said, that Ukraine and Taiwan are not disparate geopolitical tinderboxes, but rather different fronts of the same battle against a new bloc that occupies eastern Ukraine and Crimea, has taken over and militarized disputed islands in the South China Sea, and subsumed Hong Kong’s democracy. Both Russia and China have territorial disputes with Japan. Moscow has put former Soviet states on alert, while also making vague nuclear threats in Europe’s direction. Meanwhile, Beijing is testing the resolve of India, the Philippines, Malaysia, and Indonesia to defend their territory.

To either side of the Atlantic, the repercussions of a successful Russian invasion of Ukraine are obvious: Countries once under Soviet sway would face a greater threat from Putin, who might continue his adventurism to shore up support as the Russian economy suffers from sanctions. Citizens in Western democracies are less aware, however, of the importance of Taiwan’s continued sovereignty to the current security order in Asia, and beyond.

Geographically, China would control key sea lanes through the South and East China Seas, significantly increasing its ability to exert military pressure across the Western Pacific and political influence around the globe. Technologically, Beijing’s jurisdiction over the world’s most advanced semiconductor manufacturing facilities would put China in a commanding position to establish dominant military advantages, expand global economic dependencies, and set the standards for humankind’s technological future.

Politically, “the loss of Taiwan would validate and propel Beijing’s narratives of the inevitability of American decline and the superiority of China’s ruthlessly efficient autocratic system over the incoherence and disunity of Western-style liberal democracy,” says Ivan Kanapathy, a senior fellow at the Washington-based Center for Strategic and Budgetary Assessments who previously served as the National Security Council’s deputy senior director for Asia and as a U.S. military attaché in Taipei. It would, he told me, “represent an epochal strategic shift of global power and influence.”

As in Ukraine, the most important factor in Taiwan’s survival is the willingness of its people to defend its hard-earned democracy. Wang, the surgeon, told me that she’s already shifted from wanting to avoid getting involved in politics to feeling a sense of responsibility for doing so, and hopes that other Taiwanese do too.

“I want to be more brave, and am more willing to speak up about my feelings for my country,” she said. “No matter what happens, I will choose to stand up for Taiwan.”