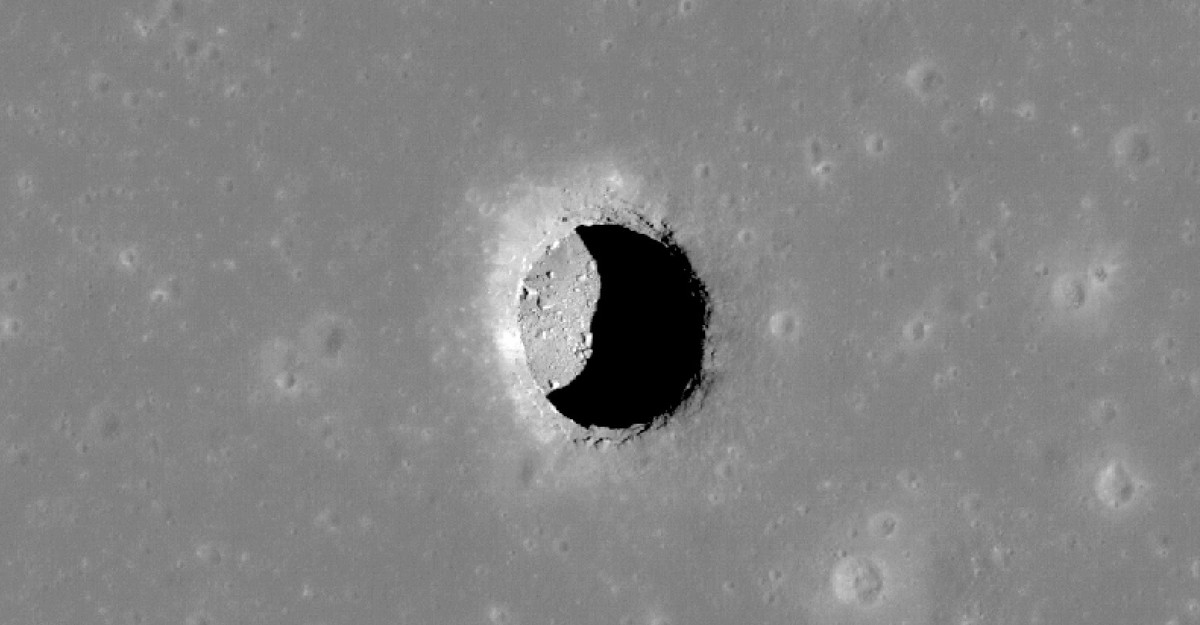 The moon has a reputation for “magnificent desolation,” as Buzz Aldrin said when he stepped onto the surface more than 50 years ago. It has no atmosphere to speak of, and no protection from a constant stream of radiation, whether from the sun or deep space. During a lunar day, about as long as 15 of our own, nonstop sunlight makes the surface hot enough to boil water. A lunar night lasts just as long, only it’s unfathomably cold.

Yet hidden in this bleak picture are a select few places that might offer some respite from all those inhospitable conditions. And one particular spot that sounds almost … pleasant?

Using data from a spacecraft in orbit around the moon, scientists have studied a cavern on the lunar surface and discovered that part of it has a pleasantly cool temperature of 63 degrees Fahrenheit (about 17 degrees Celsius). This cavern is shaped like a cylinder, and extends about 328 feet (100 meters) down from the surface—about the height of a 30-story building. Sunlight illuminates only part of the cavern’s bottom; the rest is out of reach, and remains permanently shadowed.

That shade keeps the area from warming up too much during the day and prevents heat from escaping at night, leading to almost lovely room temps. On top of that, this particular cavern also has a rare feature: a little dent in the wall, near the bottom, that scientists believe could be the entrance to a hidden, underground cave. It would be quite nice in there too; a cave would not only have stable temperatures but also provide some shelter from cosmic rays, solar particles, even the micrometeorites that are always smacking into the moon. Compared with the lunar surface up above, “it’s very cozy,” Tyler Horvath, the UCLA planetary scientist who led the new research, told me.

Read: The mystery of moon water

Scientists refer to these cylindrical caverns as lunar pits, holes, or depressions. But given the relative coziness that Horvath and his colleagues have discovered there, those labels sound too dour. Let’s call them moon nooks instead.

The moon has a couple hundred such nooks. Some of them are relics of its ancient past as a molten world. A few billion years ago, volcanoes sprinkled the lunar surface, spewing lava that flowed like rivers across the landscape. When the topmost layers cooled and solidified, the lava beneath continued to flow in underground tubes. Today the moon is all hardened rock, but the winding architecture shaped by these ancient flows remains below its surface. A nook might appear after rocky debris strikes the moon with enough force to collapse a lava tube’s ceiling, exposing a hidden void.

At least two moon nooks bear the distinct signs of a potential cave, including the one that Horvath studied, located in the plains known as the Sea of Tranquility, in the moon’s northern hemisphere. Horvath worked with data from a thermal camera on NASA’s Lunar Reconnaissance Orbiter, which didn’t yield too much information. “The pit is smaller than a single pixel on that camera,” Horvath said. But that fraction of a pixel “was popping up so brightly in the data,” he said, and his team could use computer modeling to extrapolate the temperature conditions inside the shadowed regions of the nook. Their analysis suggests that the temperature fluctuates very little from lunar day to night. “A cave, if there’s one present at that pit, would be really comfortable,” Horvath said.

Read: The moon is leaving us

If the temperature alone wasn’t a draw, the perspective should be: From inside, a visitor could see the moon in a completely different way. “The lunar surface is covered in regolith, which is just broken-up rocks from the eons of impacts that have hit the moon,” Amanda Stadermann, a planetary scientist at the University of Arizona who studies lunar rocks, told me. The scattered landscape is far from a pristine geological record. But “the idea of rappelling down the side of one of these pits, it’s very exciting,” Staderman said. The moon’s past would unfold before you as you descended into the shadows, the temperatures becoming more pleasant the farther down you went: layer after layer of hardened lava, the familiar shapes of bubbles caught in the flow and frozen in time. And all the way at the bottom, perhaps a cave, the sort of place that, even on Earth, has an age-old appeal as a temporary shelter, even a home.

Horvath studied this particular nook at NASA’s request; the agency was considering a spacecraft mission to one of these cozy spots, and it needed to know what kind of thermal conditions a robot might encounter. NASA hasn’t pursued that project further, but moon nooks remain a tantalizing target for future lunar missions. The European Space Agency recently convened several dozens of scientists and engineers to brainstorm designs for a spacecraft that would explore a nook that could lead to a cave. The first Apollo astronauts landed in the Sea of Tranquility in 1969, but they didn’t explore any mysterious pits, bouncing along the powdery surface instead. Perhaps future generations of astronauts, tasked with building permanent homes on the moon, could go underground, away from the lunar elements. A moon nook sounds like the perfect place to curl up with a good book about life-support systems.