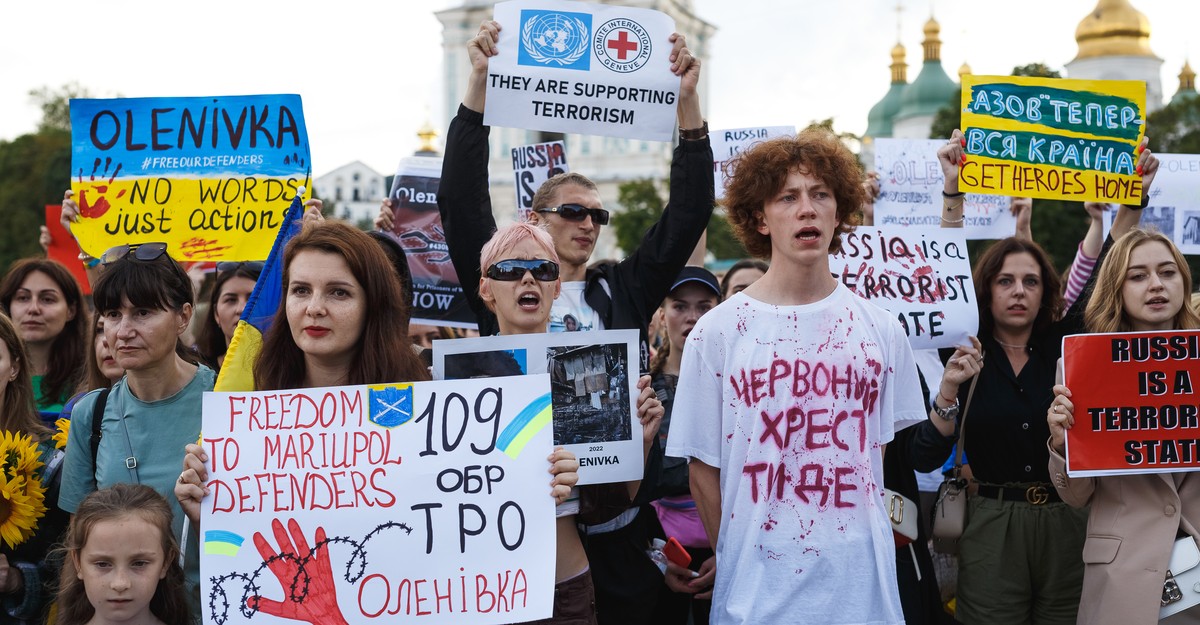 Russia is fighting a war to turn back history, but Ukrainians—and even the oppressed people of Belarus—refuse to go back under Moscow’s fist. Their resistance should inspire Americans to renew our democracy.

The powerful cover of the October issue of The Atlantic features stories on Ukraine and Belarus. Reading them, I felt something like vertigo, a strange sense of living in the wrong timeline. This is an edition of the magazine that, in an earlier life, I would have regarded as an exercise in speculative fiction, the kind of alternate-history thought experiment pioneered by writers such as Harry Turtledove and Philip K. Dick: A major war is raging in Europe as Ukraine fights off Russia and volunteers from Belarus join the fray. The 30 members of NATO—30? And soon to be 32?!—are providing weapons to Ukraine and holding the line in the West.

I guess I shouldn’t have fallen off the path and killed those butterflies when I used a time machine to hunt a Tyrannosaurus rex.

I find all of this especially disorienting because my first career, before the years I spent teaching U.S. military officers, was as a “Sovietologist.” I studied Russian, read the works of Lenin, and traveled to the U.S.S.R. I pored over Kremlin communiqués and examined photographs in Soviet newspapers to figure out who was standing next to whom and thus which communist functionary had which job in the leadership. When the Soviet Union fell—itself a dizzying event that went from a seeming impossibility to a reality in less than a decade—I took on a new scholarly endeavor studying post-Soviet democracy and thinking about how Western policies might help give freedom in Russia and other former Soviet republics a fighting chance.

But even then, a shadow loomed over my optimism: Belarus. I saw Minsk’s dictator, Alexander Lukashenko, who ascended to the presidency in 1994, as something like the Ghost of Christmas Yet to Come—the dreaded future that could overtake Russia and the other former Soviet republics if their experiments in democracy failed. “Belarus,” I wrote in 1999, “has, in a matter of a few years, made great strides in returning to the Soviet past its president so openly reveres.” (Indeed, Lukashenko controls Belarus to this day.) I was also concerned about Ukraine, a country whose first two decades of independence were mired in corruption and an identity crisis driven by the division between Ukrainian nationalists and the pro-Russian population.

Both Belarus and Ukraine were caught in Russia’s immense gravitational field, and their futures were unavoidably tied to events in Red Square. The Kremlin, of course, is once again a bastion of autocracy, and its master, Vladimir Putin, is trying to reestablish something like the Soviet Union. I never thought Putin’s demented fantasy had much hope of success, but although I didn’t expect democracy to flourish in the post-Soviet world, I also didn’t think anyone in Moscow would be unhinged enough to launch a major war and court global disaster.

And yet, here we are. Ukraine is fighting back and, in the process—as George Packer notes in his article—defending the kinds of values the people of the United States once claimed to revere. I was especially struck by the kind of civic involvement and spirit of voluntarism that Americans once knew so well:

A whole society mobilized: This was my first, and most lasting, impression. The mayor of Lviv, Andriy Sadovyi, described Ukraine in crisis as “a beehive.” Nearly everyone I met had looked for something to do as soon as Russia attacked—some way to be useful without waiting for instructions from a higher authority.

The Soviet experience killed trust and initiative among the subjects of the Soviet empire, yet Putin’s attempt to restore that empire has instead restored something like civic virtue in Ukraine. Derided by Putin and other Russians as a fictional country, Ukraine is now much more an example of a cohesive nation than Putin’s somber and dispirited Russia. Reading the passage above, I wonder how many of my fellow citizens in America could rise above their bickering and grievances to cooperate this way. It was possible in the country I once knew; today, I’m not so sure.

Meanwhile, volunteers from Belarus are heading into the fight. They hope to both save Ukraine and topple Lukashenko, who was almost certainly voted out of power two years ago but instead chose violence over accepting the likely outcome. (Sounds familiar.) For these young men, the two battles are part of the same war. As Anne Applebaum writes:

The Russian invasion of Ukraine was a turning point, a different level of threat, a shock to the system, a “spit in the face.” If Ukraine does not win, one of them told me, “we will have to say goodbye to any idea of a free Belarus.”

Again, I am struck by the fortitude of people who had the choice to simply pick up and leave. “Most of the men I spoke with have other options,” Anne notes, and “they could have good lives outside Belarus if they wanted to.” These people are too young to remember the Soviet Union, but they have made their choice to defy Putin’s Soviet restoration. If the Soviet Union has to fall twice, so be it.

This same spirit of courage and democratic commitment once moved Americans, the people who volunteered to defend their nation—not just with military service, but in any way they could—from the day after Pearl Harbor to the day after 9/11. The United States sees itself as an inspiration for democratic movements around the world; perhaps those same movements should now inspire us as well.

The Moon Will Have to Wait

By now, the spaceship should have been on its way to the moon. By now, NASA had hoped, the gumdrop-shaped capsule—designed to carry astronauts someday—would be sending all kinds of data back home, showing engineers how its first journey to space was going.

But the capsule is still here, sitting atop a giant rocket that has so far refused to leave Earth. NASA spent weeks hyping up the inaugural flight of the Space Launch System, the rocket at the center of America’s ambitious effort to land astronauts on the moon again in this decade. Celebrity appearances and musical performances were lined up. There were enough Krispy Kreme doughnuts at the Kennedy Space Center to feed the whole state of Florida. Even the vice president flew in. And yet, the rocket has stayed put.

Read. A new poem by Richard Blanco. “Because I faithfully reply to every email from the absurd / gods of urgency who punish my good deeds by leaving me / empty when I empty my inbox.”

Watch. The 2016 Star Wars movie Rogue One, available to stream on Disney+. It was a minor miracle, our critic writes—and deserves some credit ahead of the upcoming Disney+ prequel series Andor.

The invasion of Ukraine is the end of a period that began (at least as a personal impression) sometime in the early 1990s, when the dust of the Soviet collapse was settling and Russians were coming to terms with their history. I’ll pass along my recommendation for some excellent history written by a Soviet historian tomorrow, but today, I want to point you to an astounding and moving 1994 film titled Burnt by the Sun—a study of love and betrayal during a summer in the early 1930s, when Stalin’s purges were closing in on one Russian family.

It is a flawed but beautiful film, which makes it all the more tragic that its director, Nikita Mikhalkov, is now a Russian nationalist and Putin loyalist who supported the annexation of Crimea in 2014 and now supports the war in Ukraine. It’s important to separate the art from the artist, but it is hard to watch Burnt by the Sun and realize that its creator learned nothing from his own creation.