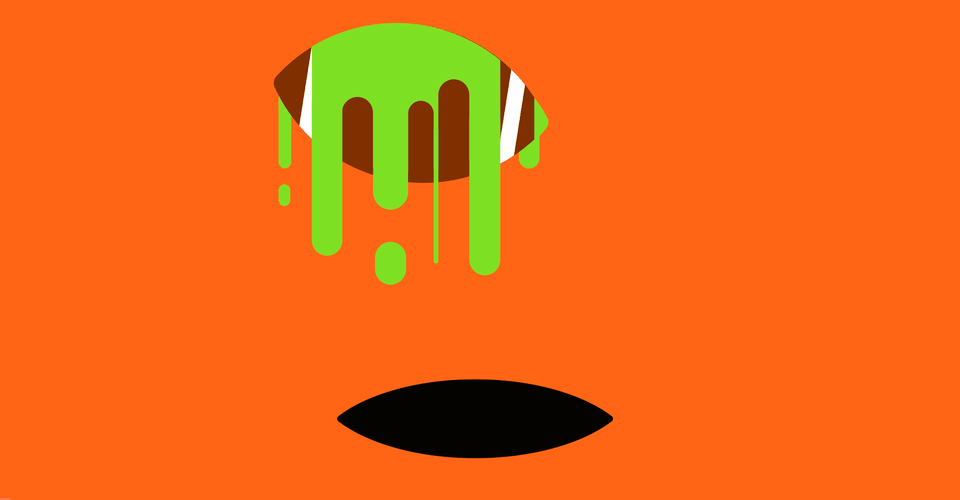 There were augmented-reality cannons discharging torrents of green slime. Then an orange blimp appeared overhead, releasing more goo, and a big sea monster made of something similarly viscous sprouted from the field, flexing its biceps. At one point, cartoon wings took shape on the backs of the football players, and googly eyes were superimposed on their faces. Moments later, SpongeBob’s memeable grin popped up between the goalposts, eclipsed only by that of Young Sheldon, the kid sitcom star who’d emerge sporadically from a chyron to explain the game’s formalities.

I was not in Bikini Bottom, tripping on acid. No, I was watching the NFL on Nickelodeon.

This psychotropic production aired last month, when the San Francisco 49ers upset the Dallas Cowboys in the first round of the playoffs. While most of the country watched the traditional broadcast on CBS, another 1.3 million people opted for the simulcast on Nickelodeon, made possible after the merger of the channel’s parent company, Viacom, with CBS. Now in its second year, the partnership is modest by NFL standards: The 49ers versus the Cowboys was the sole game this year broadcast on Nickelodeon. But all of the network’s football coverage gets embellished with the sensory bells and whistles of Bill Nye the Science Guy, including NFL Slimetime, Nickelodeon’s high-spirited alternative to the dozens of football talk shows that air weekly across cable.

The first sliming of the day…@EliMitch15 enters the SLIME ZONE! #FTTB

The purpose of this savvy bit of cross-promotion is, of course, to engage kids, who watch and play football at diminishing rates relative to years past, a trend accelerated by video games, the pandemic, and the changing perception of football as a seedbed of injury more than opportunity. But as a solution to the league’s persistent optics problem, the NFL on Nick is like a spoonful of agitprop, coating professional football in sugar and slime.

Read: Peyton and Eli Manning can’t save the NFL

This week, as the Super Bowl approaches, those more traditional studio shows have been discussing the explosive 58-page federal lawsuit filed Tuesday by the former Miami Dolphins coach Brian Flores accusing the NFL of discriminating against him and other Black coaches in its hiring practices. But on Nickelodeon, the league’s most unsavory realities are kept out by a moat of slime. Players are reimagined in loud graphics as action heroes or Teenage Mutant Ninja Turtles. On Slimetime, they appear regularly to be interviewed by the show’s Gen-Z correspondents in endearing segments that mostly dispense with football chatter in favor of more pressing questions like “How far do you think you can throw a pineapple?” Every week, a player is deemed the NVP (Nickelodeon Valuable Player), earning him the right to get slimed by his teammates.

During the playoff game—called by CBS Sports’s Noah Eagle, the Nickelodeon personality Gabrielle Nevaeh Green, and the former NFL player Nate Burleson—the savage and sometimes inscrutable nature of the sport was made legible and benign. Together they were an effective broadcasting team: Eagle and Burleson, the football experts; Green, the neophyte, discussing the game’s rules and regulations in almost Socratic banter that rendered football zany, wholesome, and coherent. “Fourth and inches,” to Burleson, was “half a Plankton” to his younger counterpart in the booth, liaising admirably between the TikTok generation and the NFL. During a late attempt to mount a comeback, the Cowboys failed to snap the ball before the play clock ran out, resulting in a delay-of-game penalty and a loss of five yards. Right on time, Young Sheldon surfaced, gopherlike, to explain the rule. “This rewards punctuality,” he cheekily noted. “Good job, NFL!”

Over on CBS, sideline cameras zoomed in for a close-up after the 49ers All-Pro linebacker Fred Warner writhed in pain on the field, clutching his knee. Back on Nickelodeon, they cut to commercial. “There’s no reason for us to replay it or even go into it,” Shawn Robbins, the executive producer of football on Nickelodeon, told me. “If somebody wanted that, they can always turn over to CBS, and they could’ve gotten the update on any player that was injured.”

The crown jewel of American sports leagues, whose games accounted for 75 of the 100 most-watched TV broadcasts of 2021, the NFL has long used television as an instrument of recruitment and mythmaking, selling football to kids and grown-ups alike as something noble and time-honored. The league has not, until recently, had to obscure the game’s gladiatorial nature in order to market itself; just consider the theatrical specials produced by NFL Films and the blustering displays of American military aircraft before games, a longstanding spectacle funded by the Department of Defense.

But a spate of crises—namely the league’s decades-long concealment of the game’s effects on the brain, and a fraternity of overwhelmingly white team owners out of step with much of the the country—has loosened the NFL’s vise grip on the American imagination, and it is straining to shore up its future fanbase. A century ago, President Theodore Roosevelt advised American boys to “hit the line hard” and approach life like a football game, but it wasn’t exactly a political fiasco when, as president, Barack Obama said he’d “have to think long and hard” before letting a child of his play football. Parents, nowadays, seem to share his misgivings. From 2008 to 2019, the number of American boys playing youth tackle football fell from 2.5 million to 1.9 million, while Super Bowl viewership in the 18–49 demographic has nosedived steadily since 2012, accounting now for just 36 percent of the game’s television audience.

“We know that most people who are avid NFL fans became a fan when they were a kid,” Amanda Herald, the NFL’s vice president of media strategy and business development, told me. Accordingly, the league has in the past 15 years launched a number of initiatives to court new, younger fans. Its “Play 60” campaign, operating in some 73,000 American schools, encourages children to exercise for an hour each day and offers participating schools $4,000 grants and a curriculum of football drills. But identifying on-screen opportunities for growth with this demographic, Herald said, “is something that’s been an increased focus over the past few years.”

Read: The NFL has a ‘good ol’ boy’ problem

So in spite of its reputation as the most retrograde of major American sports leagues, the NFL continues to reinvent itself and its relationship to television. Gone are the days of “Jacked Up!,” when the Monday Night Football crew would count down the five biggest hits of the week, replaying the collisions on a loop and then barking the titular phrase in unison as if summoning the spirit of Lawrence Taylor. The segment was pulled from the air in 2006, a year after the first case of chronic traumatic encephalopathy was identified in a former football player, and three years before the NFL would publicly concede any correlation whatsoever between football and brain damage. In recent years, the NFL and its allied networks have sought to soften the league’s public image, stenciling the phrase END RACISM in the end zones of all 32 teams, even as the league’s inequities get worse. Despite the Rooney Rule, mandating since 2003 that NFL teams interview minorities for head-coaching and managerial positions, just one current NFL head coach is Black, compared with roughly 70 percent of its players. Maybe football on Nickelodeon is the logical conclusion to the league’s optics-first approach, but that would imply there aren’t more ploys for new viewers and goodwill in its future.

If, to older and more knowing fans, the Nickelodeon telecast appeared to be yet another deft or dark-sided publicity grab, its charms are just as much a smoke screen for the realities that seem to be driving people away from football altogether. Surely the NFL on Nick will turn some of its young viewers into lifetime fans of the sport. And their parents, too, might welcome the opportunity to watch football this way, requiring of them no moral calculus, no ritualistic displays of alarm for the wounded. The more evidence put forth for the uncomfortably direct relationship between football and brain injury, the better we get at this song and dance. We know ourselves to be implicated, but from the couch, all this seems remote, the consequence of systems and institutions far greater than us. After all, the weather’s always nice in Bikini Bottom. So stick your head in the sand and enjoy the game.