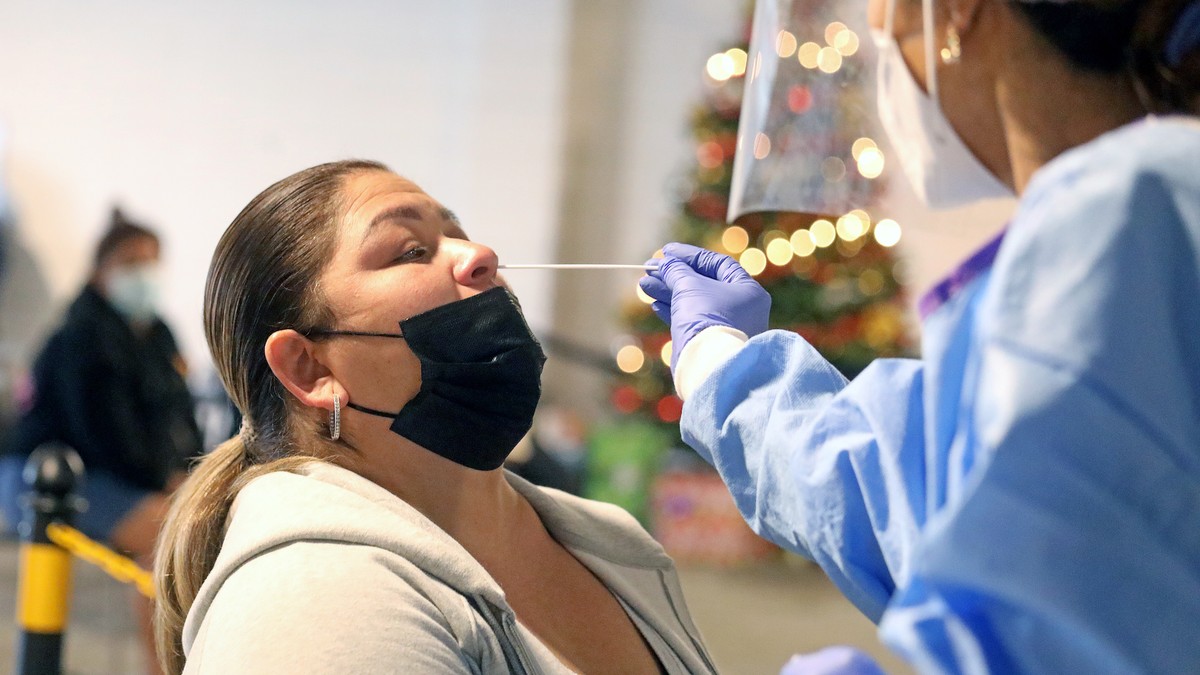 The year is coming to an end, but the pandemic is not. Barely a month after it was discovered in South Africa, the Omicron variant has resulted in the United States shattering new case records as Omicron infects even the vaccinated and boosted. The U.S. is now recording nearly 500,000 new cases per day, surpassing anything the pandemic has dished out so far. The U.S. isn’t alone, as Omicron spreads the globe and breaks pandemic records all across Europe.

After first devastating New York City, the Omicron variant has spread nationwide, forming new hotspots all across the country. New York’s neighboring states have been reporting a record number of cases, with New Jersey being hit especially hard.

A consistent hotspot for the virus, Florida reported 46,000 new cases on Tuesday, breaking all previous single-day records. Washington, D.C. is also dealing with a major surge as the nation’s capital is currently recording 1,192 new cases per day. And the increase isn’t limited to the U.S. mainland, as Hawaii and Puerto Rico are seeing abrupt surges.

Omicron accounts for more than half of the cases genomically sequenced as of Dec. 19. But Delta is also part of this surge, as both variants ravage a country that has shown itself to be consistently ill-equipped for the worst.

How fast does the Omicron variant spread?

There seems to be little doubt that Omicron spreads faster than any previous variants. Since its discovery in South Africa, the Omicron wave has dominated COVID-19 cases in the U.S.

All signs point to a variant that is far faster at spreading than the already rapid Delta variant. Studies have found Omicron to be three times more likely to spread in a household than the Delta variant. Omicron’s wildfire take-over of New York its ease in spreading to the vaccinated and unvaccinated alike..

Preliminary data point to the specific mutations that the Omicron variant exhibits, making it infect and multiply 70 times faster in the human bronchus than the previous variants. The same study concludes that Omicron is ineffective at replicating in deeper lung tissue than the original virus, possibly making it less severe.

How long does Omicron incubate?

One of the prominent issues with past COVID variants was not just their easy transmissibility (which pales in comparison to Omicron) but their long incubation periods. The original and the Delta variant have incubation periods as long as 14 days. The Omicron variant, according to a CDC study, has an incubation period between 3 to 5 days.

The initial issue was the uncertainty that the long incubation periods created, but the rapidness of the Omicron variant does present a unique set of problems.

The Omicron variant’s easy spreadability coupled with its short incubation period makes it seem as if everyone is getting COVID, and though that is hyperbole, Omicron spreads like wildfire in densely populated areas. That’s resulted in shutdowns of services and businesses as many workers fall ill.

The unvaccinated and kids are overloading hospitals

By all accounts, the symptoms for Omicron are milder than for Delta or the original variant. Even so, COVID patients are putting a major strain on the nation’s already fragile healthcare system. As of December, a little over 60% of the U.S. population is vaccinated, which leaves about 132 million people still unvaccinated.

Hospitalizations of unvaccinated children are approaching previous pandemic peaks as hundreds of children with COVID-19 are admitted to the hospital.

It is currently unknown if Omicron is milder in and of itself or because of vaccines, but if the latter proves to be the case, the sheer number of unvaxxed Americans could overwhelm a system that has been cracking since the pandemic began.

In late December, the CDC surprised health experts and epidemiologists by shortening the recommended quarantine period for those who test positive in their guidelines.

The new recommendations shorten the original 10-day quarantine period to just five days, after which, if they are asymptomatic or their symptoms are resolving, then it is recommended to wear a mask for another five days.

The CDC pins their updated guidelines on what is currently known about the Omicron variant and its incredibly quick incubation period and that a person becomes infectious two to three days before they show symptoms.

“It really had a lot to do with what we thought people would be able to tolerate,” Walensky  told CNN, suggesting that because Omicron cases seem to be mild, people would consider the conservative 10 days of isolation overkill and not adhere to the original guidelines.

But the science on the new variant is far from conclusive, and even then does not account for the Delta variant, which still makes up about 40% of positive cases as of December 25

The CDC’s guidelines even fall short of the guidelines set up by other nations. The UK also shortened its recommended period of isolation for people who test positive, from 10 days to seven, but they require a negative rapid test on the last day in order to leave isolation.

Walensky said that the CDC’s concerns over rapid tests stem from growing evidence that the tests might not be sensitive enough to detect the Omicron variant.

Currently, the US is suffering from a supply shortage for COVID tests, though Walensky denies that the shortage has anything to do with the CDC’s decision to exclude a negative test requirement.

The state of COVID testing

The US is currently suffering from a shortage of COVID-19 test kits, leaving many Americans in the worst hotspots scrambling to get tested. Hospitals are hit especially hard as Americans resort to going to the ER just to get tested, stretching their resources thin.

Beyond the testing shortages, the Omicron variant presents a new set of issues for the two types of tests that have been reliably used in the pandemic so far.

Rapid Test: The COVID-19 antigen test, also known as the rapid test, may not be as sensitive to Omicron as it was to the original virus and the Delta variant. With the popularity of at-home rapid tests, this presents a problem of accuracy for many Americans.

PCR Test: Polymerase chain reaction tests, or PCR tests, are far more accurate at detecting the Omicron variant. But are not reliable at determining whether or not a person is still transmitting the virus since the test can show positive results for up to 12 weeks after infection.

How severe is Omicron?

Omicron symptoms, from the outset, look no different from the original virus and the Delta variant:

The distinct loss of taste or smell that was the calling card of past variants doesn’t seem as widespread with the Omicron variant. The actual severity of these symptoms varies from person to person, and could be dependent on vaccination status and an individuals own immune response.

It will be weeks before we know how deadly the Omicron variant really is, since deaths are a lagging indicator. An unvaccinated Texas man in his 50s became the first recorded death from Omicron in the U.S. While many of the cases reported have been mild, the Omicron variant’s ability to spread at lightning speed makes it a cause for concern.