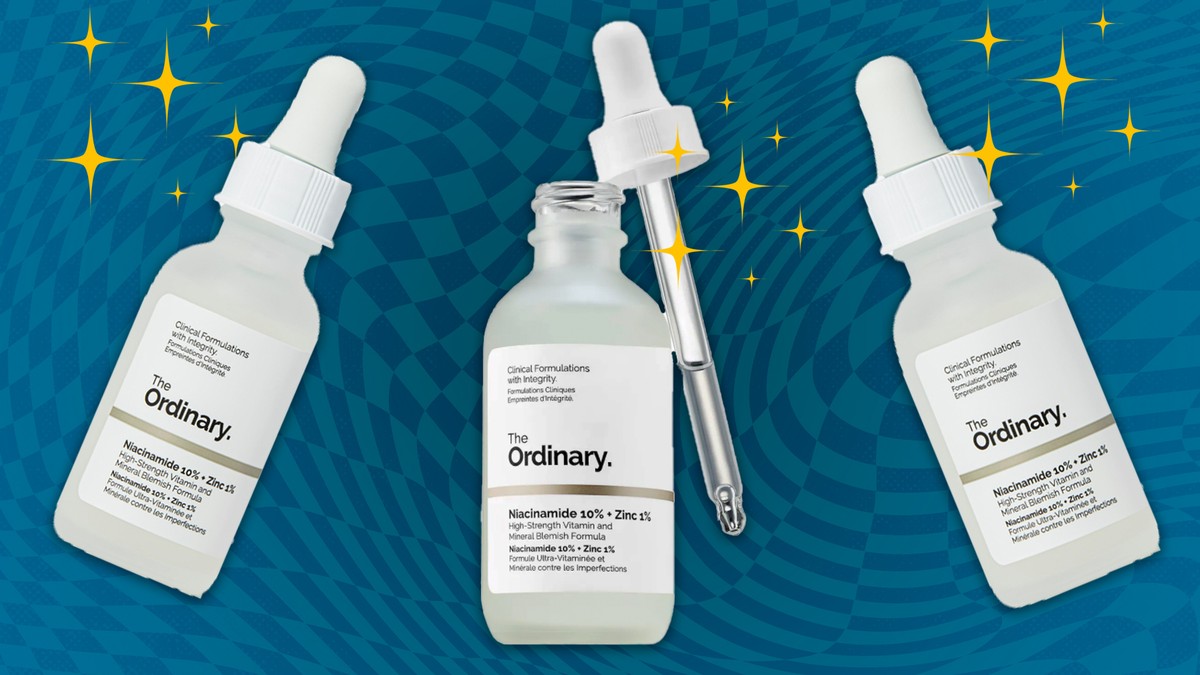 A lot of skincare products out there are snake oil. I say this as someone with all sorts of creams, serums, and vials spilling out of my medicine cabinet, some of which cost more than a ribeye steak dinner (with a martini). I’m fully aware that skincare is just another industry centered on convincing women that they should be insecure about the way that they look, and that they’re societally obligated to “fix” whatever perceived flaws they can find in a magnifying mirror. Many “acne-fighting” or “age-defying” products are full of false promises and questionable ingredients. And still, I buy into the aggressively enchanting marketing of the skincare industry—which was worth about $100 billion in the US alone as of 2021, and is expected to increase by another $45 billion or so by 2028.

Like anyone else, I obviously care about how I look. And the reality is that for my entire adult life, my skin has mostly been just OK on the grand scale of things, neither facing any truly harrowing problems nor impressing anyone. I’ve got a super-light complexion that shows every vein and shadow, pretty big pores, and a fair amount of texture (which, I will argue forever, is not a bad thing), and none of those things have ever really bothered me. But the ailment that has plagued me since sixth grade has been a rotating parade of cystic acne on my chin and around my nose.

Ever since the days when I was buying Spice Girls Chupa Chups, there has almost constantly been one to four hideous, pulsating zits trying to make my face their home, and like Wack-a-Mole, I have begrudgingly poked, prodded, smeared, or covered them dutifully and with an increasingly Sisyphean weariness. But y’all, I’m writing this today to make the grand announcement that they’ve been gone for more than six months, and they’re showing no signs of coming back—and it’s all because of a dirt-cheap face serum with a boring name, to which I owe eternal gratitude and which I now evangelize.

So that I don’t bury the lede too hard, I’ll tell you right now that I’m talking about The Ordinary‘s Niacinamide 10% + Zinc 1% Oil Control Serum. This stuff is my holy grail product. But first I need to explain just how long it took me to find it, and how many cystic acne products have failed before it.

The cystic acne I was dealing with

If you’ve never had a deep, cystic zit, well, congratulations. Those of you who know, know, but for any readers who might be wondering what I’m talking about, I’m specifically referring to a particularly malevolent breed of blemish that forms its own subterranean lair under your skin, pumping with molten pus, refusing to surface and form a head, and tormenting you for weeks on end. If you’re lucky enough to be able to coax the spot’s contents to the surface—because if you don’t, the zit can just hang out for literally months—you’re rewarded with a truly disgusting volcanic eruption of multicolored gunk, followed by a peeling scab that looks even worse for several days until it eventually turns into a pink dot and then retreats back into the circle of hell whence it came.

While I’ve dealt with this type of cystic acne pretty consistently since I was about 13, it got worse during the pandemic, as wearing a mask seemed to trap oil and bring on even more insidious “maskne.”

Before, when I was constantly fighting off evil volcanic zits on my chin. Please erase these from your brain and see the “after” shots below.

All the products I tried before

For what it’s worth, until recently my skin has never really gotten markedly better or worse by way of any particular products I’ve used. As far as prescription solutions go, I’ve been on Differin gel (before it was OTC) and a sulfur face wash, but my skin was never in truly dire enough straits to consider something covered in warning labels like Accutane. I saw unremarkable results from years on salicylic acid-based face washes, benzoyl peroxide creams, Mario Badescu Drying Cream and Drying Lotion (OK for drying up zits that are already in their life-ruining stage), Sunday Riley’s retinoid serum, Herbivore’s Lapis Oil, and several drawers worth of random drug store face washes that promised to make my skin clear. Every time something seemed to work, Old Faithful would eventually reemerge in my chin area days or weeks later. It seemed like nothing could make it go away forever.

I finally started seeing a small improvement a couple of years ago when a coworker recommended InstaNatural’s Age Defying and SkinClearing serum to me. At around 20 bucks, it’s one of the more affordable serums out there, and with its stellar reviews and botanicals-forward ingredients list, I figured I had nothing to lose. I found that when I religiously applied it every night after washing my face, I did start to see a reduction in the frequency and duration of my Monster Jam zits.

At this point, after a year or so of using the serum, I was by no means a goddess of good skin, but it was clear I was finally taking steps in the right direction. So I perused the active ingredients on the InstaNatural stuff’s label, and through process of elimination, noticed that I had tried using higher concentrations of three of the active ingredients (salicylic acid, retinol, and vitamin C), but not of the fourth: niacinamide. Being a genius chemist, I figured I’d try leaning in further on the niacinamide front, even though I had no idea what this multisyllabic chemical was or how it worked. I now know that niacinamide is a form of vitamin B3, and that it’s proven to help reduce inflammation and redness, heal the skin barrier and boost collagen production. But TBQH, the science-y stuff is beyond my pay grade. What’s more important is that it works, for real.

The Ordinary’s niacinamide serum is 10% niacinamide, 1% zinc, and only $6.50 at Sephora for the small bottle. I threw it in my cart during a COVID-quar depression online shopping binge and figured that it was a cheap experiment. I applied a thin layer to the lower half of my face at night after washing my face with Aesop’s Parsley Seed Facial Cleanser, then applied my nighttime moisturizer (at the time, it was Fresh Black Tea Firming Corset Cream, but these days, it’s Origins Plantscription Youth-Renewing Power Night Cream). In the morning, I splashed plain old water on my face and applied another thin layer of the serum, then, when it was dry, applied my moisturizer (Peter Thomas Roth’s Vital-E Microbiome Age Defense Cream). I try to keep my skincare regimen as simple as possible, and in this case, it made the results extra clear.

My expectations started somewhere between “zilch” and “very modest,” and, as I’ve continued to use the serum, have blown through “whoa… I think this is the real thing” to “I will use this every day for probably the rest of my life.” See, in the nine months since I started using The Ordinary’s niacinamide serum, I’ve had one zit. One. And that was months ago. My skin texture has gotten smoother, my pores appear smaller, and my sebaceous filaments (if you aren’t familiar with what those are, do not worry about, it will just give you a new insecurity) are donezo. Sorry for using this word, but I think I’m kind of “glowy”? I never have to cover up blemishes with concealer, and I’ve felt way more comfortable going makeup-free in general. I like having my photo taken more, and don’t feel like I have to hide anything about my complexion. Not too be hyperbolic, but it’s been kind of life-changing—legitimately.

After using The Ordinary’s Niacinamide 10% and Zinc 1% Serum for a few months. No filter, baby!

This regimen has kept my skin ridiculously clear for long enough that I’ve stopped worrying about zits coming back; I know that as long as I keep using the niacinamide serum, they won’t. The larger 2-ounce bottle of The Ordinary’s serum lasts me about eight to 10 weeks, and when I have to-reup, I don’t stress, since it’s only $11.70. If you’re curious and feeling noncommittal, try the small bottle; I started seeing results within a week.

This clear goo with a boring name in a simple white bottle literally cured my cystic acne. With zero negative side effects. And it’s cheap. Sometimes you get what you pay for, and sometimes, the gods of clear skin just smile upon you and cut you a deal.

The Rec Room staff independently selected all of the stuff featured in this story.