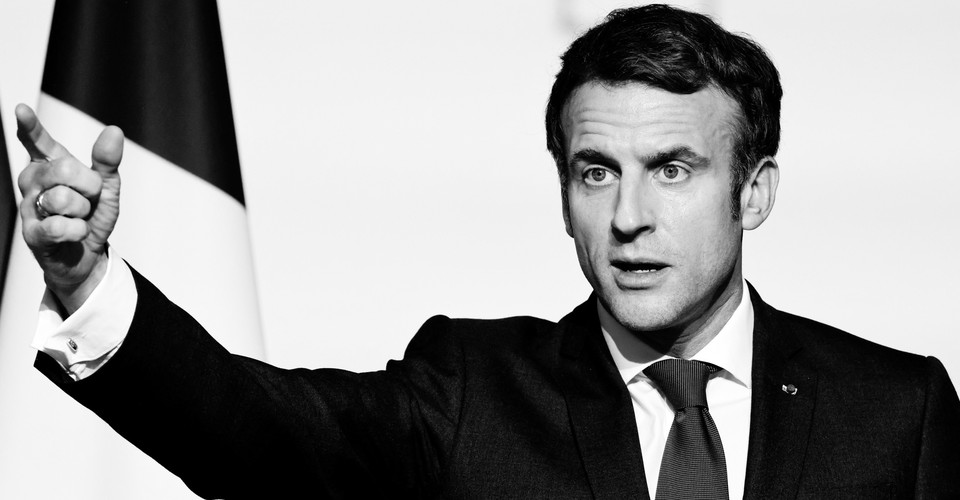 Politicians rarely set out to piss off their constituents, much less admit to doing so. So when French President Emmanuel Macron expressed his desire to antagonize France’s unvaccinated citizens into receiving COVID vaccinations, observers and many of his rivals were appalled, and some were a bit confused. Macron is up for reelection in April, and a quarter of his country remains unimmunized.

But what looked like a risky move for Macron could prove to be a more politically shrewd calculation, not because of whom it alienates, but rather because of whom it doesn’t. In France, and in other democratic countries around the world, the unvaccinated make up a relatively small segment of the population. Macron and his peers in countries such as Australia and Italy have calculated that condemning this group could be more politically effective than pandering to it. Even world-famous celebrities such as tennis star Novak Djokovic, whose unvaccinated status dashed his hopes of defending his Australian Open title, have become the targets of politicians’ ire. By taking a tougher line on the unvaccinated, Macron and other democratically elected leaders facing elections this year may be courting an energetic new voter base: the vaccinated, and ever more impatient, majority.

For all of the attention that has been paid to the growing political cleavage between the jabbed and the jabless, getting vaccinated is extremely popular in countries where vaccines are widely available. Countries such as the United Arab Emirates, Spain, and Canada have vaccination rates as high as 94 percent, 81 percent, and 79 percent, respectively, without blanket vaccine mandates. To put this popularity into perspective: More Britons have gotten vaccinated (47 million) than watched the Euro 2020 final between England and Italy (31 million). In the United States, being vaccinated is more common than drinking coffee, owning a television, or even watching the Super Bowl.

It stands to reason, then, that politicians would seek to use this popular issue to their political advantage. This is particularly true in the French context, where it is estimated that only 5 million people over the age of 12 have yet to receive a single dose. By recently passing new rules restricting those without proof of vaccination from accessing restaurants, transport, and other public venues, the French government is clearly trying to encourage the country’s remaining holdouts to get the jab. As Macron colorfully put it, his government wants to make being unvaccinated so inconvenient that it “piss[es] them off.” Until recently, unimmunized French people could still access public spaces so long as they could provide proof of a negative COVID test, which I previously described as the “carrot” approach to promoting vaccination. By shifting to a more punitive model, Macron seems to be kicking off his as-yet-undeclared presidential campaign with a pledge to stick it to the unvaccinated.

In Macron’s case, it might just work. Patience with the unimmunized is waning in France, where nearly half of the population believes that those who are unvaccinated should have to pay for their own hospital bills (health care in France, as in most of Europe, is financed by the state). Two-thirds support the new vaccine-passport requirements to access public spaces. The way many French people see it, widespread vaccination was their ticket to a semblance of normalcy over the summer. As the Omicron variant spreads, and as intensive-care units come under the strain of primarily unvaccinated patients, many people may wonder why those who got vaccinated should face the same restrictions as those who opted against. This same logic informed the Austrian government’s decision last year to impose restrictions solely on the country’s 2 million or so unvaccinated individuals, a policy that several other European countries later mimicked.

By targeting the unvaccinated, Macron is positioning himself as an ally of the vaccinated majority. He is also putting his political opponents in the uncomfortable position of having to stand up for the unvaccinated, which, as The New Statesman’s Ido Vock noted, “can have only limited electoral appeal, because the primary constituency it targets is so marginal.”

Italian Prime Minister Mario Draghi, who last week introduced a series of new restrictions barring unvaccinated people from public spaces such as restaurants, theaters, and transport, has also taken the unvaccinated to task. “Most of the problems we are facing today depend on the fact that there are unvaccinated people,” Draghi said last week. He, unlike Macron, isn’t contesting an imminent election. But even if he were, the prime minister wouldn’t have much to worry about: An overwhelming 86 percent of the eligible Italian population is already vaccinated. And like most Europeans, the majority of Italians are in favor of the country’s vaccine passports. The Italian government’s recent decision to mandate COVID vaccines for people older than 50 also enjoys broad support.

But perhaps the most high-profile example of this political strategy could be seen in Australia, which over the weekend brought an end to its 10-day legal standoff with Djokovic, who was deported from the country yesterday, on the eve of what would have been his opening match. The Serbian tennis player had arrived in Melbourne earlier this month to defend his Australian Open championship title, for which the tournament granted him a medical exemption to participate. The Australian public, which has endured some of the world’s harshest pandemic-related border restrictions, widely opposed Djokovic’s being allowed an exception simply because he’s extremely good at tennis. Australian Prime Minister Scott Morrison, perhaps sensing an opportunity to boost his party’s dwindling popularity ahead of the country’s upcoming election, invoked his authority to cancel Djokovic’s visa on the grounds that “no one is above [the] rules.” The Australian Border Force issued a separate statement citing Djokovic’s failure to meet the country’s entry requirements.

Public sentiment has been with Morrison on this issue. A recent poll found that 71 percent of Australians believed that Djokovic should not have been allowed to stay in the country and compete. But Australian courts initially sided with the tennis star. A federal judge ruled last week that the tennis player should be released from detention and his visa reinstated. That ultimately didn’t stop Morrison’s government from canceling Djokovic’s visa for the second time on Friday on “health and order grounds,” arguing that doing so was in the public interest.

Canceling Djokovic’s visa was in the government’s political interest too. Although deporting Djokovic risked sparking a diplomatic spat with Serbia, whose government criticized Australia’s treatment of its biggest sports star, allowing him to stay would have appeared to give him special treatment, especially in light of revelations that he may have misled the Australian Border Force. Alienating Serbia is clearly undesirable, but giving Djokovic a pass would have been politically dangerous, particularly in a country such as Australia, which boasts a 92 percent vaccination rate. As much as Morrison might have been protecting public health, he was also protecting his own political standing.

As with all political strategies, the anti-anti-vax position isn’t foolproof. In Macron’s case, his criticisms of unvaccinated citizens could be interpreted by some voters as Jupiterian arrogance. For Morrison, the Djokovic affair has been seen by some as a distraction from the Australian government’s handling of the Omicron surge. Perhaps the biggest concern about anti-anti-vax rhetoric—one that has been repeatedly expressed by public-health experts—is that it could make the unvaccinated even less likely to get the jab. But many in the vaccinated majority, whose patience with the pandemic and compassion for their unvaccinated counterparts is growing thin, may feel a kind of relief: After almost two years of COVID-19, their leaders are telling them exactly whom to blame.