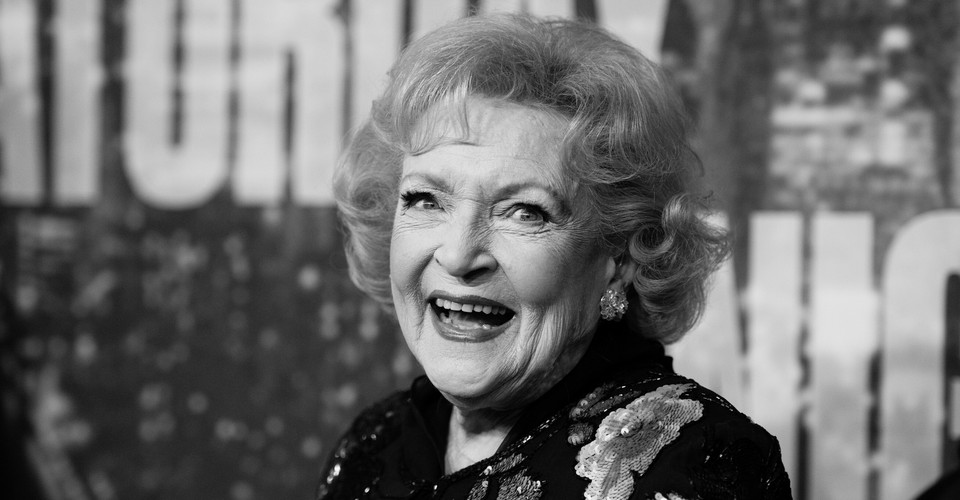 In 1973, before the series’ fourth season, the producers of The Mary Tyler Moore Show discussed the casting of a new character they were soon to introduce. Sue Ann Nivens, the host of the Happy Homemaker program on the fictional WJM-TV news station, would be cunning and cutting and a foil for her colleague Mary’s adamant optimism. She should be played, the producers thought, by a Betty White type, Moore later said—someone who, like Moore’s real-life friend Betty White, had a reputation for sunniness that the sitcom could steadily subvert. They finally asked White herself to fill the role, and the result was a performance that elevated both the show and the sitcom as a genre. White, who died yesterday at 99, played Sue Ann as setup and punch line at once, an embodiment and a rejection of the demands American culture made of women. Through the character, too, Betty White satirized the “Betty White type.” She extended that satire through the many, many other characters she played, and through her own evolving persona. She spent the decades of her career—eight of them, to be precise—taking people’s underestimations of her and treating them as what they were: a joke.

Sue Ann could easily have been a one-dimensional farce. But White gave her an eloquent kind of dissonance—Jekyll and Hyde, retrofitted for the age of the feminine mystique. During a segment she narrates, “News From a Woman’s Point of View,” Sue Ann informs viewers about a deadly mudslide in Alaska, interspersing her updates about the tragedy with cheerful tips for a home economist: “Let’s all hope that survivors remember that stubborn grime can be removed with a blend of warm water and cornstarch.” The more graphic Sue Ann’s updates become (“victims, plucked gagging from the slime”), the more lilting her voice, and the sunnier her smile. The escalating absurdity makes for the quintessential Sue Ann joke: homemaking, made comically perverse.

The Mary Tyler Moore Show was in many ways a reply to the family-based sitcoms of the ’50s and ’60s, shows that conflated women’s compliance and women’s capital. Sue Ann might be the canniest of the show’s rejoinders. She exerts extreme control over her own passivity. She deploys her smile in roughly the same way she uses a soufflé or a scouring pad: as a tool that will help her get what she wants. She wields her cheerfulness, strategically. Sue Ann is paid an office visit by her sister, Lila, who informs her that she’s gotten an offer to host her own TV show. Sue Ann hugs Lila, congratulating her, beaming, and then ushers her out. The door closes. Her grin settles into a grimace. Sue Ann, no longer pretending, issues a primal scream.

The collision of expectation and reality extends to Sue Ann’s sex life. White played the character as faintly feline—a cougar before it would occur to people to give middle-aged women’s desire its own ironic taxonomy. She is manipulative and unruly and raunchy, which is to say very many of the things American culture suspects women in general of being, in secret. She is in some ways, for her time, a worst-case scenario: a collision of femininity and masculinity, each unfettered, each neglecting its place.

Read: The real feminist impact of The Mary Tyler Moore Show was behind the scenes

But Sue Ann is decidedly not a cautionary tale, because Sue Ann, as White’s performance makes clear, also has a fabulous time being all the things she is not supposed to. The Happy Homemaker turns life’s lemons into lemonade, sure, but then she spikes the bowl. In one episode, Mary, Murray, Lou, and Ted visit Sue Ann at home, in her bedroom. Something catches Ted’s eye from above, and suddenly he’s bending at awkward angles, adjusting his hat as if he’s glimpsed himself and seen something askew. The joke, rendered entirely through the actor Ted Knight’s pantomime, takes a moment to register: Sue Ann Nivens, purveyor of primness, has a mirror above her bed.

White brought a similar whiplash to Rose Nylund, the oracle of St. Olaf, Minnesota, and The Golden Girls’ complicated simpleton. White was originally cast to play Blanche Devereaux, while Rue McClanahan, whom White had worked with on Mama’s Family, was set to play Rose. The two actors ended up swapping the roles. Magic ensued. White gave Rose some of the key elements of Sue Ann’s public persona: Rose is optimistic and accommodating and always ready to flash that frank, blank grin. But, buoyed by the show’s sharp writing, she is also much more than she seems. Rose is dim right up until she’s brilliant (remember when she replumbed a bathroom, all on her own?). She is obliging until she’s competitive. She’s kind, unless you cross her.

Early in The Golden Girls’ Season 3, Blanche mistakenly gives away Rose’s beloved teddy bear, Fernando, to Daisy, a member of a Girl Scout–style troop. Daisy (played by Jenny Lewis) holds him for ransom. Rose deals with this situation as only Rose can. “If after all the years of love and companionship, Fernando and I are meant to part company, I’ll just have to accept that,” she says, mournfully, in what seems to be a classic moment of sitcomic soliloquy. “Time to time, life deals you an unfriendly hand. There’s nothing you can do about it.” And then: “I guess there’s a lesson to be learned here,” she continues, grabbing Fernando with one hand and Daisy with the other. “Sometimes life just isn’t fair, kiddo.” Rose pushes the girl out the door, hugging Fernando and beaming with joy.

As so often happens on The Golden Girls, it is Rose’s smile that seals the joke. (See also: White, as Rose, describing the mechanics of “herring circuses” with such wide-eyed earnestness that she causes both McClanahan and the famously flinty Bea Arthur to break character.) Rose, as White played her, is not just funnier than you’d expect. She is also steelier and stranger. Through her reminiscences, St. Olaf becomes a place of magical realism tinged also with notes of Midsommar. Through her, too, the stereotype Rose might seem to conform to—the grandmother, warm and welcoming and happy for whatever attention people might deign to give her—gets its deserved skewering. White’s performance, in that sense, is comedy that doubles as catharsis: Rose is a victory for people who have been underestimated or oversimplified. She is a gift to those who have been misunderstood.

Read: When the fifth Golden Girl was a man named Coco

White herself, the actor and activist and producer and host, offered a similar gift. She spent her entire career taking bland expectations and complicating them. In the 1950s, when women producers were rare, White both starred in and had creative control over her own sitcom. In the 2010s, she took her public image as “America’s grandma” and poked fun at it. At 88, she starred in the Snickers ad that introduced her to a new generation of fans—a commercial in which she played football, and played herself, and made fun of the young guy she was up against. During the Saturday Night Live hosting gig that followed—a Facebook campaign begged the show to have her on—she made winking sexual advances to the studio audience. At 90, she began producing and hosting a reality show devoted to pranks pulled on unsuspecting young people. At 97, she engaged in a running joke about a crush that Ryan Reynolds, her co-star in The Proposal, has had on her. At 99, she came up with a new entry in it: “I’ve heard Ryan can’t get over his thing for me,” she said. “But Robert Redford is The One.”

She kept working. She kept creating. She kept teasing. “I don’t know if there’s anyone more loved than you,” Ellen DeGeneres told White in 2010. The object of all that devotion didn’t miss a beat: “Have I got them fooled!” she replied, flashing that inimitable grin.