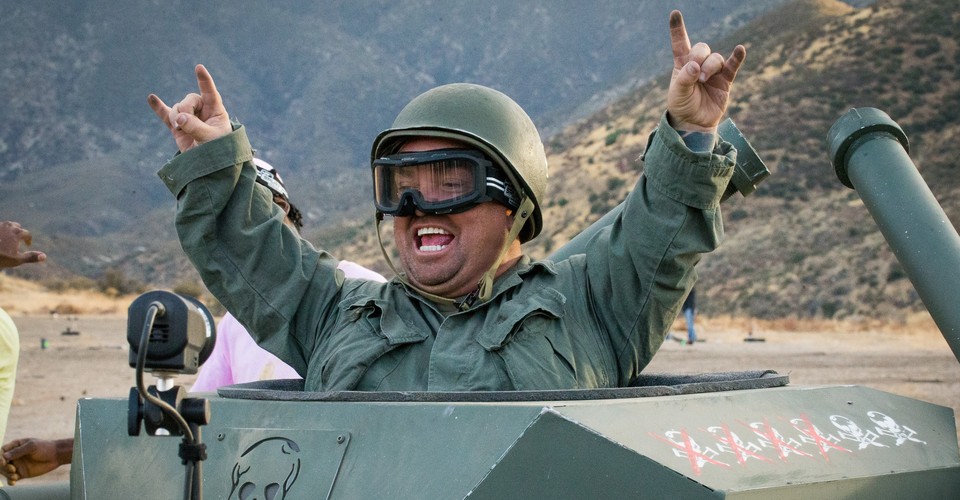 The power of Jackass has always rested with the peanut gallery. Almost every ridiculous, painful stunt Johnny Knoxville and his gang of nimrods have pulled over the past 20-plus years has come with a reliable laugh track: the rest of the ensemble gathered around to watch, doubled over and cackling as someone subjects themselves to unspeakable injury. The sight of Knoxville shooting himself out of a cannon armed only with feathered wings to keep him aloft is certainly something to behold, but its beauty is increased tenfold because of the hooting and hollering coming from his pals on the ground.

When Jackass, which aired on MTV for three seasons starting in 2000, first spun off into movie form, in 2002, it was hard to imagine how a show about skateboarding fools torturing one another’s genitals could sustain itself as a feature-length piece of cinema. Jackass: The Movie turned out to be quite a triumph, cleverly scaling up the ridiculousness of the show’s pranks and escaping the strictures of basic cable. But the best thing about its leap to theaters was that it took the peanut gallery and made it bigger. Suddenly, you could watch Jackass and its sequels with more than just a couple of friends on the couch. Seeing one of these films in a packed, roaring crowd is a thrilling experience.

[Read: 26 brilliant movies that critics were wrong about]

That’s why I highly anticipated the release of Jackass Forever, originally planned for March 2021 but delayed four times by pandemic concerns. I worried that this film, which reunites almost all of the original show’s cast for the first time since 2010’s Jackass 3D, would get shunted to some streaming service after one COVID-related postponement too many. But it’s finally in theaters; the studio’s hope, clearly, is that even with Hollywood’s box office just now rebounding, young viewers will turn out en masse as they have for superheroes and slasher flicks of late. And if you see Jackass with a crowd, you’re practically guaranteed a good time.

Even after its original, impressive upgrade, Jackass’s limitations remained. The movies have no plot and no particular character arcs, simply cutting from one sketch to the next; Knoxville will get plowed into the ground by a bull, and seconds later Chris Pontius will swing at baseballs with his penis, and seconds after that Steve-O will be catapulted into the air in a port-a-potty. The concept of Jackass, which evolved out of amateur skateboarding-stunt videos in the ’90s, is an embrace of relentless but carefully planned chaos. The merging of physical comedy and daredevil stunts tapped a vein of nihilistic humor that had never been seen in mainstream culture—a giddy distillation of Generation X’s grungy “nothing matters” outlook.

Jackass Number Two, from 2006, has long been my personal favorite of the series, partly because of its magnificent closing sequence, a blown-out Busby Berkeley–esque performance of “The Best of Times” from La Cage aux Folles that is executed with an endearing mix of sincerity and goofiness. Jackass 3D remains one of the best examples of 3-D filmmaking. Released in 2010, it used the gimmicky technology to bring viewers even closer to the brute-force madness of the various stunts. Jeff Tremaine, the director of nearly every Jackass movie, was also one of the few to glean that stark color and light were the best ways to enhance the illusion, as James Cameron had demonstrated with Avatar less than a year prior. Tremaine gave Jackass’s stunts a crisp, flamboyant vibrancy, in contrast with the muddy-looking 3-D films that Hollywood tends to make.

[Read: 16 indie films to get excited about this year]

Still, I wondered how Tremaine, Knoxville, and the other creative forces behind Jackass (including the Oscar-winning Spike Jonze) would find yet another new spin for Jackass Forever, coming more than a decade after a film that some might have assumed to be a finale. The biggest change involves the cast itself. The Jackass crew now includes some newer, younger comedians and pranksters who are a little more resilient than the middle-aged Knoxville and company. For the first time ever, the cast isn’t just a bunch of white guys; Jasper Dolphin, Rachel Wolfson, and Eric Manaka are among the additions, and they all throw themselves into the proceedings with worthy aplomb. Meanwhile, the original cast member Ryan Dunn (who died in 2011) is obviously absent. So is Bam Margera, whose personal issues and legal disputes with the franchise have spilled into the public eye.

I’ll admit to not missing Margera much. His brand of pranksterism was always the most aggressive of the bunch, and his exit might be why Jackass Forever feels a little more joyful. Of course, the tonal shift might also be due to the fact that Knoxville, Steve-O, and other original cast members, including Pontius, Dave England, Jason Acuña, Preston Lacy, and Ehren McGhehey, are far too old to keep doing this, so a swan-song atmosphere is at work. At some point during production, Knoxville let his hair revert to its natural silver color, and the on-camera effect is incredible: He looks like a perfectly coiffed trickster god, screeching with glee as he orchestrates each anarchic event.

I do not want to spoil the particulars of Jackass Forever’s best moments—the shock of seeing them unfold, especially in a group setting, is part of the fun. But I was delighted many times by the novel approaches Tremaine, Knoxville, and the team are still finding, 20 years in. The film’s opening sequence is a blend of expensive spectacle and winsome amateurism, but I equally appreciated the film’s quietest moments of pals hanging around, sipping coffee, and chatting, excitedly waiting for someone to walk into a nearby bathroom they’ve rigged to explode. Perhaps this really is the last Jackass; regardless, the series has survived so long not just because of the extravagance it conjures, but because of the camaraderie it inspires.