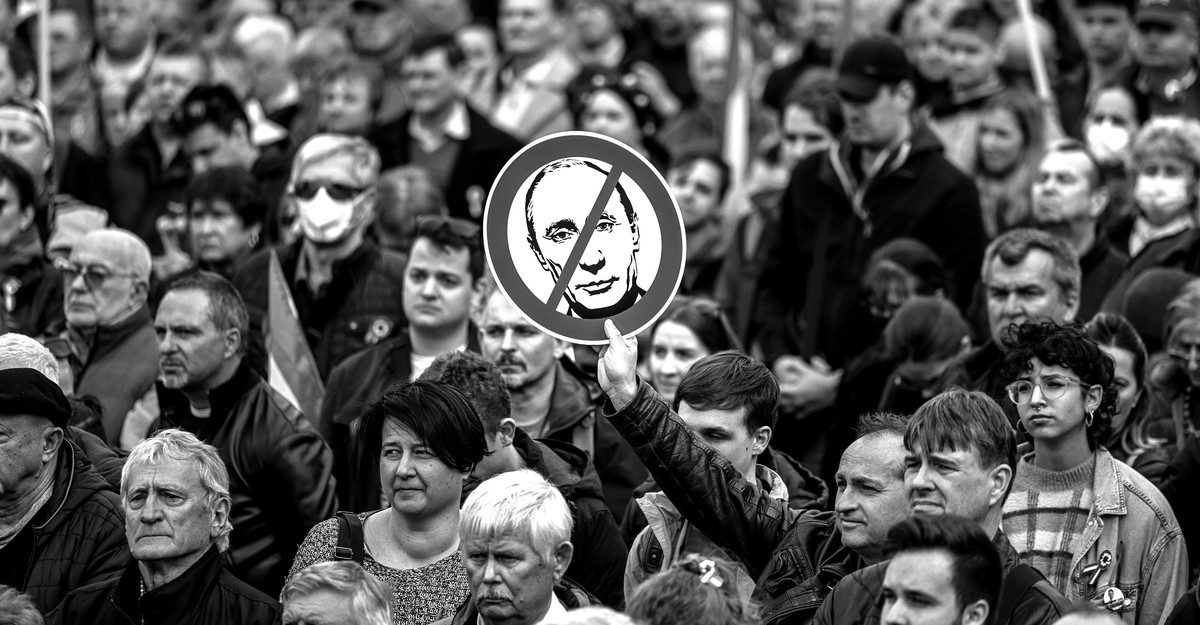 In the West, nearly every country has embraced draconian sanctions against Russia. Countless private actors have joined sweeping economic and cultural boycotts of the country, hoping to pressure President Vladimir Putin into ending his unjust war of aggression against Ukraine.

Whether this approach will work is not yet clear. Years of sanctions have failed to stop other murderous regimes from staying in power and waging war. Punishing Russia in a manner so harsh, sweeping, and shaped as much by “do something!” outrage as by carefully calculated strategy, may cause Russians to rally around Putin, or provoke further escalation, or harm the global economy in immiserating ways that make war elsewhere more likely. Or it may work, or at least prove less terrible than any of the other terrible options that are available.

Regardless, the West is pursuing this “cancel Russia” strategy: isolating the country with coordinated official sanctions and a rapid cascade of uncoordinated, highly moralized, unilateral private-sector boycotts. And that confers a responsibility on state and nonstate actors alike to proceed thoughtfully, mindful of how common destructive excesses are in wartime.

Can any needless harms be avoided?

In that spirit, I’ve been surveying anti-Russia measures and pondering how to evaluate the most and least needlessly harmful among them now, before anyone knows how all of this works out.

Two actions taken earlier this month are instructive: On March 8, President Joe Biden banned imports of Russian oil and natural gas, taking aim at that country’s most lucrative export while all but guaranteeing higher energy prices. Several days earlier, Lithuania canceled plans to donate more than 400,000 doses of COVID-19 vaccines to Bangladesh, in a move intended to punish the South Asian country for abstaining in the United Nations General Assembly’s vote condemning Russia’s invasion of Ukraine.

Both actions will harm innocents; collateral damage is inherent in any sanction aimed at a whole country. Still, if we take the “cancel Russia” strategy as a given and consider how to avoid excesses, a U.S. ban on Russian energy is defensible, while Lithuania’s vaccine clawback is hard to defend. Energy exports, more than any other part of Russia’s economy, finance its aggression. Biden’s ban could conceivably push Putin to end the war sooner on better terms for Ukraine. In contrast, punishing another country’s failure to condemn Russia by depriving it of sorely needed vaccines will result in lots of dead Bangladeshis without helping Ukraine at all.

The first rule of canceling Russia should be: If a given action is likely to harm innocents without any meaningful benefit to Ukraine, that’s a needless excess, not a necessary evil.

Violations of the rule are popping up everywhere. The Washington Post reports that “in the Czech Republic, where people still recall the trauma of the 1968 Soviet invasion of Czechoslovakia, recent social media posts have suggested Russian citizens ‘should be visibly marked, maybe with a red star.’ The morning after the invasion, a Prague university professor wrote on Facebook that he would not teach or test Russian students.” The New York Times reports that “Russian restaurants in New York City have a public relations problem. Even though many of the owners are openly against the war, or are even Ukrainian, they are getting burned by reservation cancellations, social media campaigns and bad reviews.”

Treating Russian nationals in this way is cruel. And as Dan Kois persuasively argues in Slate, it also undermines Ukrainian President Volodymyr Zelensky’s efforts to appeal directly to individual Russians’ honor and desire for peace. “Many Russians living abroad despise this war and the regime that has instigated it,” Kois notes. “Those Russian émigrés are a direct line to the Russian citizens whose resistance to the conflict and recognition of the rights of Ukraine could be crucial in bringing the war to an end.”

Read: What Zelensky’s courage says about the West

Similar logic should apply in the realms of art and culture. As Jan Dalley points out in the Financial Times, “Powerless in other ways, the arts world is doing all it can to express its outrage by focusing on the Russians in their midst. Scores of leading figures have resigned or been dismissed from their posts, and have seen their performances, exhibitions or film showings canceled.” But most of these moves are excessive. For example, the Glasgow Film Festival achieves nothing good by canceling a comedic film by the Russian director Kirill Sokolov—whose maternal grandmother, he told The New York Times, was hiding from Russian bombs in Kyiv—even if his film did get some state funding.

One type of cultural boycott makes more sense. Last month, the European Broadcasting Union barred Russia from the Eurovision Song Contest, a popular televised competition in which musicians compete not as individual artists but as designees of their home country. This decision abides by a second rule: In sports, the arts, and other cultural fields, don’t discriminate against people who merely happen to be from a sanctioned country, but when artists or athletes are officially representing that country, those activities can be more justifiably constrained.

The basketball legend Kareem Abdul-Jabbar noted in a recent Substack post that fans like to think that excellent athletes transcend their national origin, “but the unavoidable truth is that international sports is often treated as a public relations tool to promote the idea that winning at a sport somehow translates to nationalistic superiority.” As he sees it, “by showing unity with those who oppose the invasion we take away the public relations power they sought and we bring pressure to bear on the Russian bear.” More specifically, “by banning all Russian teams from competing in any international sports,” he argues, “we are affirming that Russia’s actions are unacceptable and that anyone representing their country––even though the athletes may be innocent pawns—will not be welcome.”

In my view, Abdul-Jabbar goes too far when he adds that “every governing body of every sport needs to ban Russian athletes from competing in order to send the unified message that Russia’s unilateral invasion of a sovereign country will not be tolerated.” I do not believe that,  say, the NHL should ban Russian hockey players from suiting up for their American or Canadian teams. Nor do I believe that freezing Russia out of all international competition is categorically warranted. As the economist and writer Tyler Cowen points out,

During the Cold War, American athletes proudly competed against the best of the Soviet Union, in the Olympics and elsewhere. These competitions were widely known to be formal propaganda vehicles for the Soviet empire, and everyone realized that many of the athletes supported the regime. But America didn’t try to cancel them—instead, it proudly competed against them, hoping to show the superiority of American values.

Still, like the U.S.-led boycott of the Moscow 1980 Summer Olympics—announced soon after the Soviet invasion of Afghanistan in December 1979—keeping Team Russia from international competition seems reasonable as Putin’s troops attack civilian areas. Such an exclusion sends a signal without having to go further and banish all Russians from culture.

Helen Lewis: Of course Putin is being canceled

Many in the West will err on the side of boycotts and bans, to avoid any association with Putin’s country. “What is the point at which cultural exchange—always a blur between being a humanizing balm and a tool of propaganda, a co-opting of music’s supposed neutrality—becomes unbearable?” the New York Times classical-music editor Zachary Woolfe asks. The answer is, cultural exchange is something the free people of the West can bear in every instance. It is unbearable only for dictators. The asymmetry advantages us.

Our ability to tolerate contrary views brings us to a third rule: In our zeal to punish Russia, we in the United States should strenuously resist the reckless but seemingly inevitable calls to impinge on Americans’ core civil liberties, including free speech. How perverse that such general protections are so often attacked during war––if honored, they are among our most reliable bulwarks against wartime excesses, because they help conscientious skeptics challenge mobs so convinced of their own righteousness that they lose sight of their fallibility. So no more frivolous treason accusations aimed at people engaged in lawful, constitutionally protected speech. And no more calling for American pundits “to be tried at The Hague as a disinformation agent in Putin’s war.” Critics of any approach must get their say.

Following those few rules hardly answers every thorny moral or practical question that confronts the West as it tries to thwart Russia’s invasion without declaring war on the nuclear power. Should McDonald’s, Starbucks, and Coca-Cola leave Russia? I could argue both sides: Depriving Muscovites of mocha lattes probably won’t affect Russian invaders in Ukraine, but high-profile multinational corporations might have more pragmatic reasons—such as complying with sanctions and avoiding risks to their own property and employees—for pulling out.

Companies and organizations farther afield have the luxury of making less self-interested decisions. They should pursue these goals: avoiding actions that punish innocents without helping the war effort, taking care to maintain a distinction between Russians competing and competing for Russia, and safeguarding civil liberties as strenuously as in peacetime.