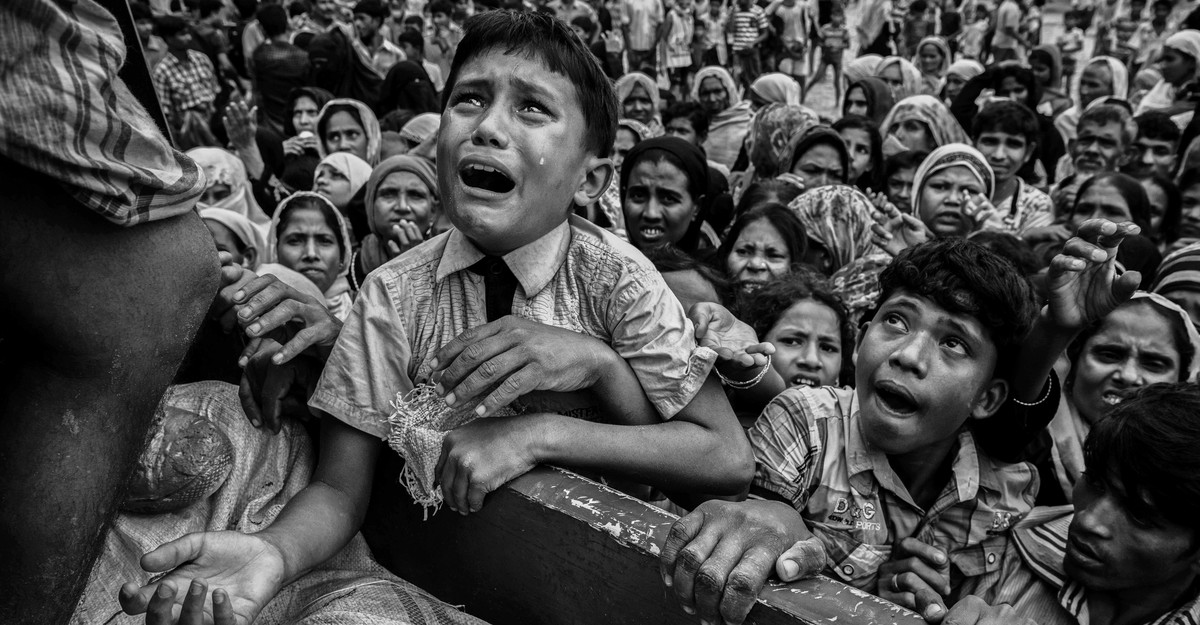 Four years ago, the State Department began an investigation into the Myanmar military’s brutal operation against the country’s Rohingya Muslims the prior year, which had resulted in scores of deaths and hundreds of thousands of Rohingya being pushed into Bangladesh. The report, spanning thousands of pages, was finalized when Mike Pompeo was still secretary of state, and he ultimately opted to call the armed forces’ actions “ethnic cleansing,” a descriptive term not defined by international law.

Today, with the United States Holocaust Memorial Museum as a weighty backdrop, his successor, Antony Blinken, went further. Blinken declared that the campaign against the Rohingya fit the definition of the gravest of crimes, uttering a word that human-rights activists had long argued applied to Myanmar: genocide.

In 2018, the Trump administration opted against using the G-word—a designation that carries possible repercussions such as limits on aid and additional sanctions against the military, as well as the prospect of international firms halting business in the country—for reasons that are quintessential to that White House, at once geopolitical (it did not want to turn away a young but flawed democracy that was already heavily reliant on China) and yet undoubtedly personal (Pompeo had been angered by a leak about the report).

In the years since, much has changed when it comes to Myanmar. Beijing remains a paramount rival of Washington’s, but Myanmar’s still-fledgling experiment with democracy was swept away a year ago by a military coup; Aung San Suu Kyi, the Nobel laureate leader who defended the armed forces against charges of genocide, was jailed by that same military; and Russia, one of Yangon’s most prominent international supporters and a key supplier of arms to the Myanmar military, has become reviled by the West over its invasion of Ukraine.

Of these factors, the coup is most central. Both within and outside Myanmar, it has highlighted the frailty of hard-won freedoms, prompting soul-searching among both the country’s political elites and the broader population about their support of the military against the Rohingya and other ethnic minorities who have been terrorized by the armed forces for decades.

Conventional wisdom may suggest that openness is a prerequisite for historic wrongs to be acknowledged. In Myanmar, the opposite has proved true: The military’s repression has forced a change of tack, eroding some of the rampant anti-Rohingya nationalism that was ubiquitous in the country’s politics, and clarifying the choices faced by the Biden administration. Ultimately, the coup brought us here—to a broader realization within Myanmar that violence carried out against one group can easily be meted out against others.

In the dawn hours of February 1, 2021, Myanmar’s military upended the country’s order, which rested uneasily on a military-drafted constitution and rule by a quasi-civilian government, by overthrowing Suu Kyi. In doing so, it unleashed a tide of anger against the armed forces. Dozens of militias have been formed to fight the junta, in addition to the numerous ethnic armed groups that had for decades been battling the military. At least 1,600 people have been killed and thousands more detained, according to rights groups. Several major international businesses—Norway’s Telenor, France’s TotalEnergies, and Japan’s Kirin among them—have announced plans to abandon their Myanmar operations, and the economy has gone into free fall.

The coup also triggered something deeper, a shift that the military’s other atrocities, including the brutal campaign against the Rohingya, failed to do: It ushered in calls for the creation of a more inclusive, equitable country. Some political elites and members of the public have scrambled to backtrack on their long-standing commitment to placating, even defending, the armed forces’ actions. Perhaps the most jarring of these reversals is the emerging idea of accountability for the military, and some form of justice for the Rohingya, which may come in spite of Suu Kyi, not because of her.

In Washington, two overriding forces have long held an outsize role in defining U.S. policy toward Myanmar: the word of Suu Kyi and the looming presence of China. Both played a role in the Trump administration’s decision to hold back on making any legal statement on what had happened in 2017, Kelley Currie, who served as the administration’s ambassador-at-large for global women’s issues and was heavily involved in the process, told me. Officials at the State Department had a “desire to protect their relationship with Aung San Suu Kyi, and they leveraged a view among senior policy makers that we needed to keep a relationship with Burma’s political elite …  to counteract China,” she said. “This was the main factor that shaped policy on Burma: great-power competition and the race to the bottom.”

This continued deference to Suu Kyi came despite her showing little interest in coalition building, downplaying the oppression of the Rohingya, and a disregard for the opinions of Myanmar’s ethnic minorities more widely in favor of Myanmar’s dominant Bamar, of whom she is a member. Her position, and prideful personality, was most clearly on display in 2019, when Myanmar was taken before the International Court of Justice over the Rohingya campaign. Then Suu Kyi defended the military her father helped found (though that had also put her under house arrest for decades) from what she and her supporters argued was an unfair and misguided attack on the country.

While internationally Suu Kyi was widely condemned, domestically she was as wildly popular as ever. Celebrities, political elites, and regular voters rallied around her at a series of demonstrations in Myanmar. One popular singer referred to her as the “bravest leader in the world.” Billboards went up picturing her with generals and thanking her for her support. A few months later, her party won national elections by a landslide.

Since the coup, however, that has all changed. Prior to the lCJ hearings this month, the National Unity Government (NUG), which represents the elected civilian government ousted in the coup, said it wanted to withdraw previously filed objections to the case that were supportive of the military and had been signed off by Suu Kyi. Zin Mar Aung, the NUG’s foreign minister, said in a statement to the court that the “new Myanmar” the NUG is striving to create “will include a special place for Rohingya communities.” The new rhetoric is remarkable: The NUG includes figures who were previously complicit in the actions against the Rohingya. Its minister of humanitarian affairs and disaster management, for example, served in Suu Kyi’s government, and was a proponent of conspiracy theories about the group. He was filmed in 2018 telling Boris Johnson, then British foreign secretary, that, despite international media and rights groups reports of the army razing Rohingya villages, the Rohingya had burned down their own houses. The claim was met with befuddlement and disbelief by Johnson.

The legal team that initially represented Myanmar in 2019 has also fractured. William Schabas, an international-law professor at Middlesex University in London and an expert on genocide, was among the lawyers defending Myanmar then, but quit after the coup. Previously, he told me, “I was dealing with the elected government of Myanmar.” Another lawyer, Phoebe Okowa, also left the case. She did not respond to a request for comment. (Schabas—who challenged the overall death toll, questioned the lack of mass graves, and openly wondered why the Rohingya were allowed to languish in camps for years if the intent was to carry out a genocide—maintains that the case against Myanmar remains a “a very weak one.”)

The shift in Washington is not as enormous as the one within Myanmar, but it’s still significant. Pompeo, who showed flashes of disdain for the media, was incensed by a 2018 Politico story that detailed the internal debate within the administration over how to classify the actions against the Rohingya. (The process of designating a genocide is not well defined, as the U.S. government does not have a formal policy to determine whether a genocide has occurred, according to a report from the U.S. Holocaust Memorial Museum.)

Days after the story ran and on the one-year anniversary of the crackdown against the Rohingya, Pompeo tweeted that the military had carried out “abhorrent ethnic cleansing.” The work of investigators tasked with examining what occurred was largely buried. Currie told me that there was an agreement to state that crimes against humanity had taken place, but “the leak really soured him [Pompeo] on the whole thing,” and “aggressive lobbying against it” from some members of the State Department “ensured it stayed an unpopular idea.”

Blinken’s announcement today focused squarely on the military, making no mention of the suddenly reformed civilian government officials and bureaucrats who previously supported the armed forces. He did, however, mention the changes that the coup had triggered. “People who are willing to commit atrocities against one group of people can swiftly be turned against another,” he said, before quoting from Martin Niemöller, a German pastor who opposed the Nazis. He added, “For those that did not realize it before the coup, the brutal violence that has followed has made it clear that there is no one the Burmese military won’t come for. No one is safe from atrocities under its rule.” This realization, Blinken said, had led more people to understand that restoring the country’s path to democracy “starts with ensuring the rights of all people in the country, including the Rohingya.”

Blinken also lauded international efforts to bring the military to justice, including the genocide case at the ICJ. Priya Pillai, an international lawyer who has written about the case and serves as the head of the Asia Justice Coalition secretariat, an umbrella organization focused on accountability, pointed out to me that part of Suu Kyi’s argument to the ICJ in 2019 was that the military had its own justice system and that perpetrators of alleged crimes, such as those involving the Rohingya, could be addressed domestically. Citing the 2008 constitution—a document drafted by the military that entrenches its political power, that bars her from being president, and that she has tried for years to change—Suu Kyi said that, if war crimes had been committed, they would be dealt with “through our military justice system.”

After attempting to appease the military, going as far as to at times flatter them and defend them to the world, Suu Kyi is now, yet again, seeing the reality they offer. She is being held at an undisclosed location; hearings in the case against her are closed to the public and held in a purpose-built courtroom; and her lawyers are barred from speaking to the media. She has been hit with frivolous charges.

Now that the military is fully in charge of the government, Pillai said, there is “very little possibility” of domestic legal proceedings delivering justice. Perhaps, with Blinken’s remarks—and the long-awaited use of the word genocide—international law can do so.