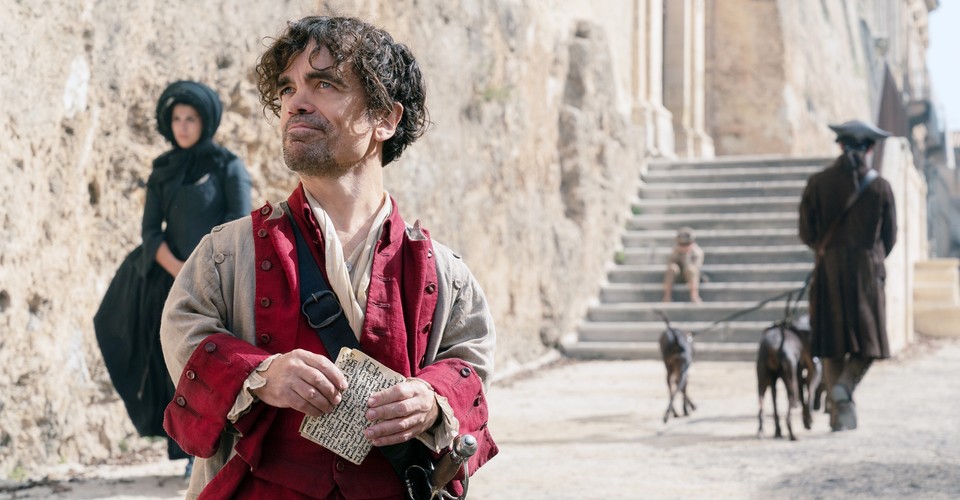 Every Joe Wright movie, for better or worse, is brimming with theatricality. The British director has tackled literary adaptations (Pride & Prejudice, Atonement, Anna Karenina), true-story dramas (The Soloist, Darkest Hour), and action-adventure (Pan, Hanna) in his surprising and varied career. Regardless of genre, he’s not a filmmaker who strives for grounded realism. Many of his painterly sets seem ready to burst off the screen, his characters deliver thunderous monologues as though they’re having normal conversations, and his camera dances fluidly around the action in long tracking shots whenever it can. The approach isn’t always successful, but I appreciate Wright’s tendency toward visual histrionics, a pattern he maintains for his latest effort, Cyrano.

Unlike the director’s other movies, Cyrano is based on an actual theatrical work: a musical rendition of Edmond Rostand’s play Cyrano de Bergerac that was adapted and directed by Erica Schmidt and featured songs by members of the band The National. That source material only encourages Wright’s grand tendencies, and the result is his boldest-looking film since Anna Karenina, shot in gorgeous locations around Sicily with dozens of dancers. But the real reason to recommend Cyrano is its lead, Peter Dinklage. He reprises his role from the stage production as the dashing nobleman who’s courageous enough to duel a mob of men at once but too shy to declare his feelings for his true love, Roxanne (played by Haley Bennett).

Over the years, Dinklage has made excellent films to go with his Emmy-laden, star-making tenure as Tyrion Lannister on Game of Thrones, but this is certainly the meatiest movie role he’s been handed since his breakout work in The Station Agent nearly 20 years ago. He rises to the challenge. Unlike the classic depiction of Cyrano de Bergerac, in which the skilled soldier and poet’s confidence is blunted by his unusually large nose, Dinklage’s character frets over his short stature, assuming that the vivacious object of his affections would never consider him as a lover because of it. Afraid to reveal himself, he instead offers his expertise as a composer of romantic verse to Christian (Kelvin Harrison Jr.), a taller, handsome cadet who has also fallen for Roxanne.

Plot-wise, the tale is largely the same as Rostand’s Cyrano, with echoes of prior film adaptations such as the 1950 Oscar winner with José Ferrer, the 1990 French version with Gérard Depardieu, or Steve Martin’s 1987 Roxanne, a modern-day retelling of the story. Cyrano is unafraid to boast of his skills with the sword or the pen, and Dinklage’s overflowing charisma fits the part. His vocal range is hardly spectacular, but the songs are suited to him, most of them mournful-sounding baritone ballads that will likely feel familiar to any longtime fan of The National.

Wright matches Dinklage’s bravado with his typically blown-out mise-en-scène, staging the action in gaudy theaters, windswept snowy mountains, and stunning castles with seaside vistas; even a conversation in a local bakery has more cinematic sweep to it than most Marvel movies. I have long adored how Wright balances heartrending emotion with colorful environments and stunning period detail. Though Anna Karenina remains my favorite of his works, Darkest Hour was underrated in how its bunker sets externalized the brooding bluster of its protagonist, Winston Churchill.

The film opens with Cyrano disrupting a crass play and running the lead actors off the set in a fit of pique, leading to a handful of duels and plenty of florid dialogue. Wright excels at these kinds of high-wire scenes, but he struggles to match the joys of those first 20 minutes. The story quickly gets bogged down in Cyrano’s insecurities and the awkward romance he maneuvers between Roxanne and Christian. Every time Wright cuts loose again, adding in twirling dances on a Sicilian rock fort, the film comes alive, but Bennett and Harrison’s perfunctory chemistry is tougher to get excited about. Subplots involving the shifty-eyed villain De Guiche (a reliably nasty Ben Mendelsohn) serve only to distract from the far more interesting protagonist.

For all its aesthetic splendor and the dynamism of its lead performance, Cyrano does not quite hit the heights of Wright’s best work; the climactic arcs are predictable, the songs are a little repetitive (though I admittedly have never been the biggest devotee of The National), and the two-hour-plus running time starts to drag. Still, the landscape of cinema doesn’t have enough maximalist costumed epics, and I’ll always applaud Wright’s ambition even when he doesn’t pull off his entire vision.