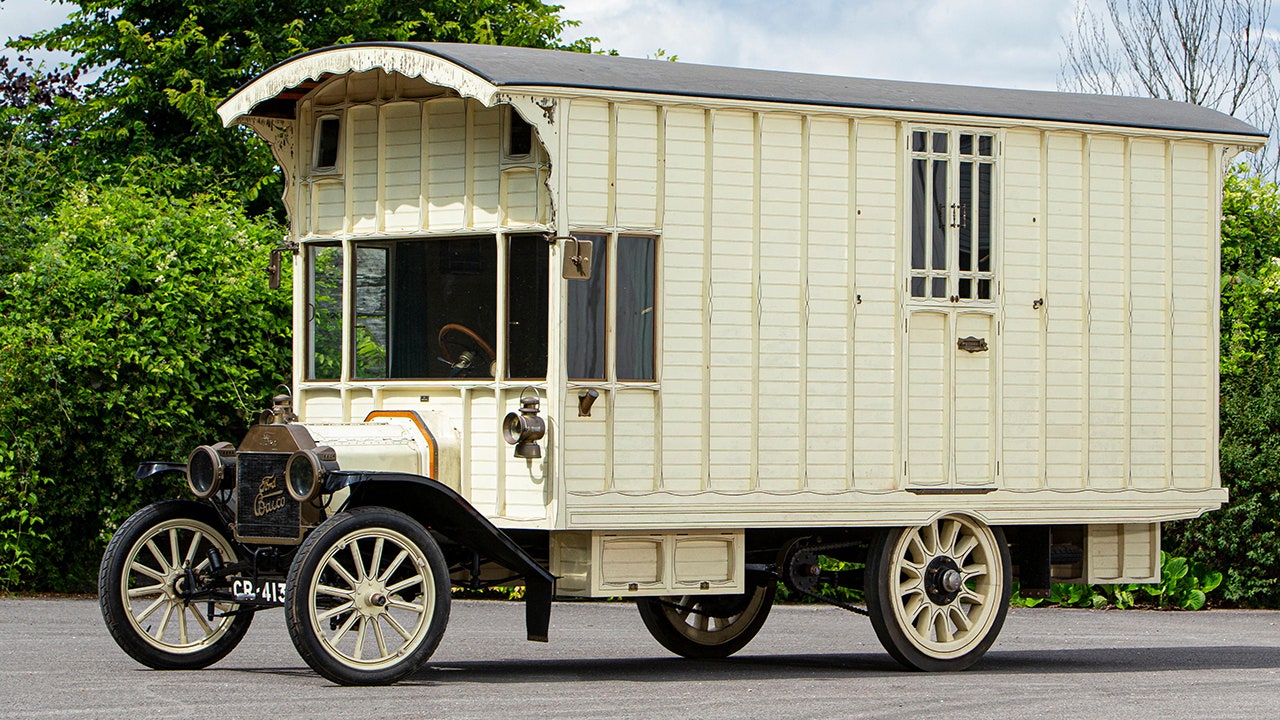 This old house is ready to roll.

What’s being billed as the “oldest-known motor caravan” is going up for auction on Saturday at the National Motor Museum in the U.K.

The vehicle is based on a 1914 Ford Model T and built on a chassis that was modified by coach builder Baico.

“Caravan” is a British term for RV and is also used to describe a travel trailer.

The Bentall family commissioned the motorhome from the Baico and Dunton coachbuilders.
(Bonhams)

The vehicle was commissioned by the family that owned the Bentalls department store chain and features sleeping for four. Its body was created by Dunton of Reading, whose history began in the horse-drawn carriage era.

It is equipped with a stove for cooking.
(Bonhams)

It also has a cast iron stove for heating and cooking and a leather couch style front seat that can be reversed to face the living area when the vehicle is parked.

The front seat is a tufted leather couch that can be flipped to face the living space.
(Bonhams)

There’s even a mail slot in the side door.

The side door has a mail slot incorporated into it.
(Bonhams)

According to the auctioneer, Bonhams, it sat abandoned for decades until it was purchased and refurbished with help from a cabinetmaker in the 1970s, and it remains fully operational.

There are enough berths to sleep four.
(Bonhams)

“The quality of material and workmanship is superb in every way and the result of the restoration is a pleasing and comfortable motor caravan, albeit that it is achieved by different means. However, I do not know of a modern design that provides such a volume of storage space,” Which Motorcaravan magazine wrote about it in 1987.

As far as it being the oldest is concerned, the vehicle pre-dates an American one built in 2015 by Roland Conklin that’s often called the first motorhome. But Conklin’s, which no longer exists, had full en-suite bathroom facilities, making it even more of a “home.”

AMAZING HOARD OF OVER 50 CLASSIC MOTORCYCLES BEING AUCTIONED

However, Al Hesselbart, who was one of the co-founders of the RV/MH Hall of Fame Museum in Elkhart, Indiana, and a leading authority on motorhome history, told Fox News Digital that, the first RV was technically the 1910 Pierce-Arrow Touring Landau.

The 1910 Pierce-Arrow Touring Landau is considered the first RV, according to historian Al Hesselbart.
(Pierce-Arrow)

More of an SUV than a full-size motorhome, the Pierce-Arrow was listed with a 66 horsepower six-cylinder motor and had a seat that turned into a bed, a fold-down wash basin, and a portable toilet and cooking equipment stored beneath the seats. Several were sold, but all have been lost to history.