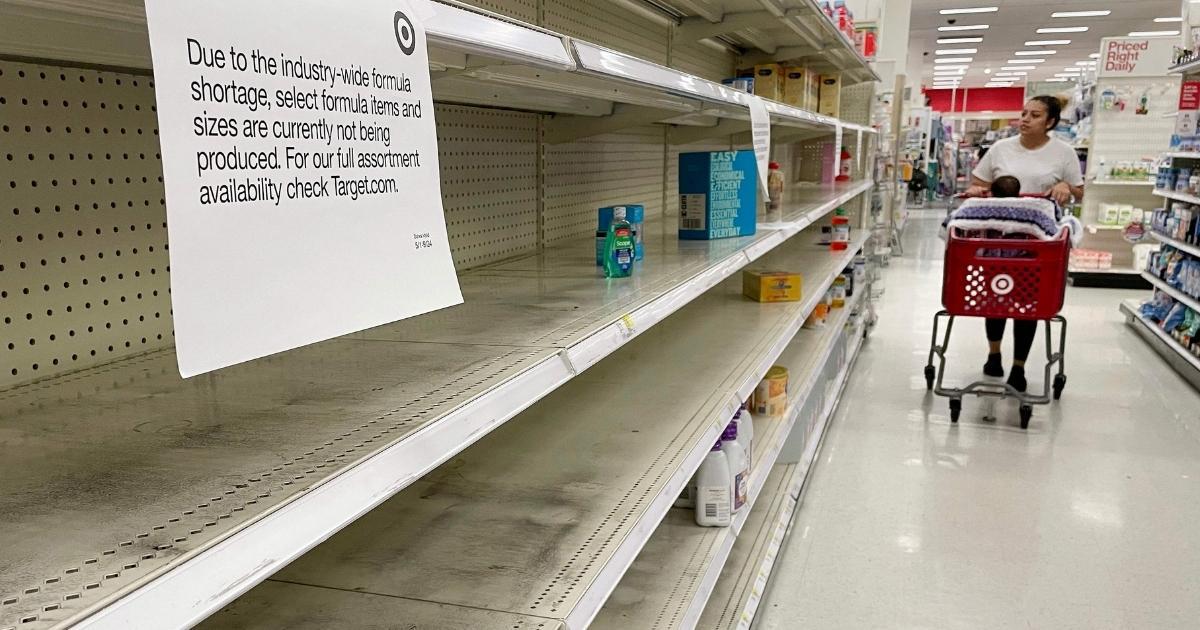 Can a baby’s suffering lead to government bureaucrats consolidating power? If Democrats get their way, the answer is yes.

One of the bills was popular on both sides of the aisle, while the other received only 12 Republican votes. Care to guess which one is chock-full of funding that increases centralized power in Washington?

The first bill was approved by a whopping vote of 414-9. Sponsored by Republican Michelle Steel of California and Democrat Jahana Hayes of Connecticut, the bill would allow low-income families to purchase more baby formula through the Special Supplemental Nutrition Program for Women, Infants and Children.

If nothing else, this bipartisan legislation would lead to tangible results in addressing the problem of babies going without formula.

Then there’s the second bill, which passed by a much narrower vote of 231-192. It would increase the budget of President Joe Biden’s Food and Drug Administration by $28 million.

In a video posted to Twitter on Thursday, Republican Rep. Tim Burchett of Tennessee said $23 million of the $28 million would go to “administrative costs and salaries” at the FDA.

“That ought to disgust you,” Burchett said. “I don’t care if you’re a Democrat or a Republican.”

The $28 million baby formula bill pays $23 million in salaries and does NOTHING for the shortage. pic.twitter.com/jpQcxSIutf

The congressman may have forgotten that Democrats have no shame.

The $28 million price tag, according to Burchett, “does nothing to put formula on the shelves.” In other words, the bill is just designed to make it look like the democratically dominated federal government is doing something to address the problem at hand.

GOP Rep. Tom Cole of Oklahoma agreed. During a House Rules Committee meeting Tuesday, he observed that the bill was designed to make Democrats look like they “were doing something about this crisis without actually doing anything,” according to NBC News.

Another Republican, Rep. Guy Reschenthaler of Pennsylvania, addressed the matter on the House floor, declaring that the bill “does nothing — I repeat, nothing — to put more formula on store shelves or hold Biden’s FDA accountable for ignoring this crisis.”

Burchett, Cole and Reschenthaler don’t have it quite right. The Democrats are doing something with the $28 million: They’re padding their pocketbooks and biding their time.

For Democrats, it’s all about appearance, not substance. Unfortunately for them, they were elected, presumably, to find real solutions to real problems.

It’s important to remember that the baby formula shortage started back in February when the FDA shut down the Abbott Nutrition facility in Sturgis, Michigan, over a suspected link to the deaths of two infants.

Abbott accounted for 42 percent of the U.S. formula market last year, according to The Wall Street Journal.

This week, the FDA said it had reached an agreement with Abbott to reopen the plant. A court still has to approve the agreement.

Is the FDA responsible for the baby formula shortage?

Abbott says it could take up to two weeks to restart the plant. Not only that, it could take six to eight weeks or more to get the formula back onto store shelves.

We could be talking about two or three more months before any real relief for American families. Did the FDA think the problem was going to take care of itself?

And what did the Democrats opt to do this late in the game? Pad the pockets of the same FDA that failed to act quickly in heading off the potential problem in the first place. A day late and a dollar richer. Is that any way to handle things?

A mantra of the left is, “Never let a crisis go to waste.” The quote, a variation of which is attributed to Winston Churchill, was appropriated by Democratic guru Rahm Emanuel during the great recession of 2008. The Democrats are nothing if unoriginal.

Churchill was referring to an unlikely alliance between Britain, the U.S. and Russia that would lead to the formation of the United Nations. He saw an opportunity to promote peace in the aftermath of the crisis that was WWII.

Emanuel, like many leftists before and since, saw a crisis as a means to consolidate bureaucratic power by forwarding narratives based on appearance rather than substance.

It’s too bad they have no sense of shame. If they did, you could spot them by the red splotches on their cheeks.