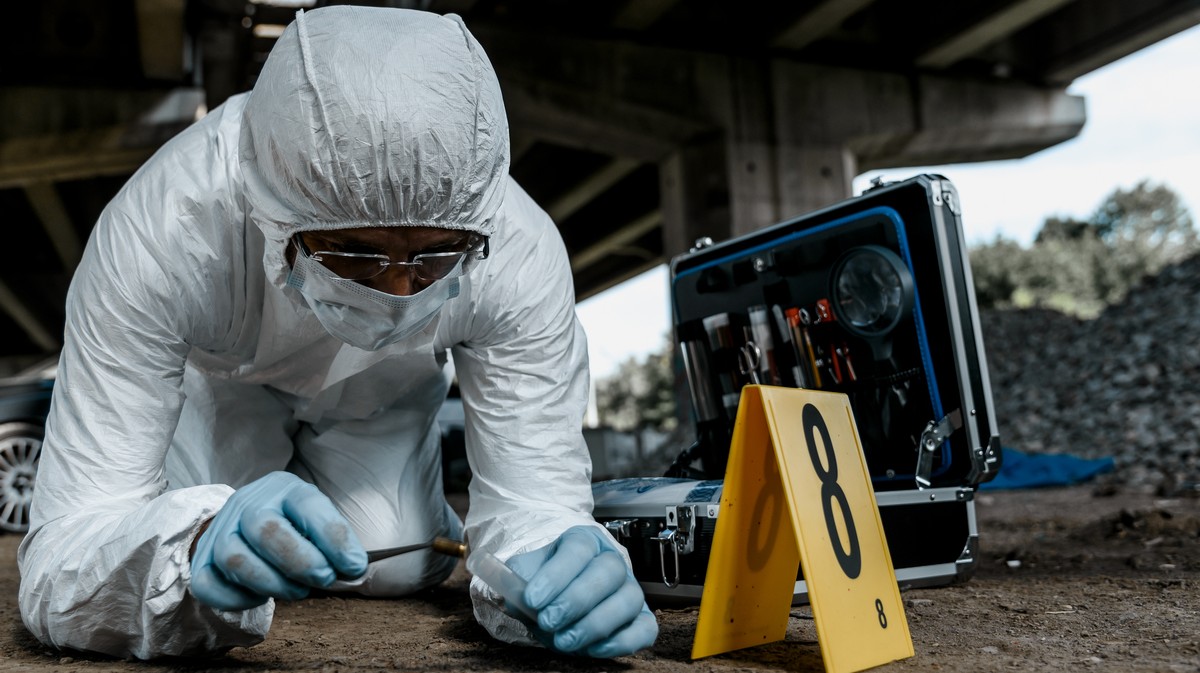 This past year showed that South Asia is an untapped reservoir of bizarre and macabre stories that make American true crime look tame in comparison.

As police investigators connected the dots to build the case, here are 9 stories where VICE World News spoke to experts and psychologists to understand the crimes.

In July, Zahir Jaffer, the son of a wealthy businessman was arrested for murdering and beheading Noor Mukadam in his home in Pakistan’s capital city of Islamabad. The deceased woman was an artist and the daughter of Pakistan’s former ambassador to South Korea, Shaukat Mukadam.

When police arrived at the scene, Jaffer had been bound with ropes by household staff after he had attempted to attack a worker from a local rehab centre who had been called in to restrain him.

In October, Jaffer and 12 others including his parents, his household staff and employees from the therapy and rehab centre Therapy Works were indicted for involvement in Mukadam’s murder. In December, Jaffer filed for an insanity defence despite initial police reports that claimed stated he was of sound mind during the night of the murder.

The case has sent shockwaves across the country, especially after leaked CCTV footage showed the victims failed escape attempts.

Her murder has launched the #JusticeForNoor campaign and a #MeToo campaign against alleged sexual predators from among Jaffer’s social circle. Many have criticised recent delays in the trial proceedings and alleged reports of special treatment granted to Jaffer in jail.

2. A Pregnant Woman Was Beheaded by Her Brother and Mother. Then They Took a Selfie

On Dec. 5, Kirti Avinash Thore’s estranged family decided to visit her at her farmhouse in the Indian city of Vaijapur for the first time. The 19-year-old woman had previously had a lengthy falling out with her family after she eloped and married her friend from college in June.

Thore began to prepare tea for her mother and brother in the kitchen after they arrived at her home. Suddenly, Thore’s brother charged at her with a sickle in hand. Her brother proceeded to behead her with the weapon while her mother held her legs down to prevent her from moving. Thore was reportedly two months pregnant.

According to reports by neighbours, Thore’s mother and brother paraded her head around the neighbourhood, after which they allegedly took a selfie with it. Police have been investigating the case as a suspected honour killing due to Thore’s family’s anger at her marriage.

“People who commit such killings feel that the women involved have brought them dishonour and shame. They even feel a sense of pride by doing these acts,” trauma therapist Seema Hingorrany told VICE World News. “Research shows that they often feel that they will go to heaven for these acts. They believe that they have sacrificed the girl or woman to the gods and goddesses.”

3. Young Couple Drink Poison and Die After Family Refuses to Let Them Marry

In a tragic case, a couple from the northeastern district of Faisalabad, Pakistan ended their lives when one of them was forced to marry someone else.

The couple Muqaddas and Adnan were discovered in critical condition by Muqaddas’s family on the night of her wedding, right before the arrival of her groom. The pair had ingested poison and were declared dead on arrival when they reached the hospital.

According to police, the couple had been in love but Muqaddas’ family had rejected the prospect of her marrying Adnan. In Pakistan, many traditional marriages are fixed by the couple’s families.

Although young people in the country are increasingly choosing their own partners, many still balk at the notion of circumventing familial obligations. “Marriages should require emotional compatibility, which is a very basic thing that is everyone’s right. The couple should first and foremost like each other,” Islamabad-based psychiatrist Abdul Wahab Yousafzai told VICE World News.

4. Man Gets Double Life Sentence For Killing His Wife With a Cobra

In October, a man was handed a double life sentence for killing his wife, who had a disability, after two previous murder attempts in the Indian state of Kerala. His choice of weapon: snakes.

Sooraj Kumar’s wife, Uthra, was found dead in a bedroom she was sharing with Kumar and their young child at her parents’ house. She was recovering from a snakebite that left her hospitalised. Kumar claimed that a snake had once again bitten his wife and that it had crept into the bedroom through an open window. Doubting their son-in-law’s story, Uthra’s parents went to the police, and their investigation revealed that Kumar had withdrawn his wife’s jewellery from a joint bank account prior to her death, and he had sedated her before throwing the snakes at her.

And it seems the case wasn’t that rare after all. On Oct. 6, the Indian Supreme Court denied bail to a woman accused of killing her mother-in-law using a venomous snake. “This is a new trend, that people bring poisonous snakes from snake charmers and kill a person through snake bite,” the court said.

In 2011, a man in Nagpur city was accused of killing his father and his stepmother by setting a cobra upon them. According to a study released in 2020, an average of 58,000 people in India died from snakebites annually from 2009 to 2019, mostly in rural areas.

5. 12-Year-Old Falls to Death ‘Taking a Selfie.’ Police Say His Father Pushed Him.

In a tragic and disturbing incident, a man was arrested in the Indian state of Gujrat for throwing his son off a bridge to his death. According to police, the accused Saeed Shaikh called out for help after pushing his son, and claimed that the 12-year-old had fallen after posing for a selfie on the bridge.

A police investigation revealed that Shaikh did it as a form of revenge against his estranged wife, Hina. “Saeed later told us that after getting separated, Hina was in a relationship with another man. Zakir [their son] apparently told Saeed that he liked his ‘new abbu’ [new father], which irked him.” Inspector HS Chauhan told local press. During police interrogations, Shaikh confessed to the killing and was arrested on Nov. 3.

“In these extreme cases, usually the hypothesis is that the father might be suffering from prolonged periods of psychosis, delusional thinking and a hidden, chaotic inner representation of self,” trauma therapist Seema Hingorrany told VICE World News. “These people see marriage as a trigger and a cause of most of their problems. Children usually end up falling prey to such dysfunctional marriages, especially when they start taking sides.”

6. Man Who Killed Mother Then Fried Her Organs Is Sentenced to Death

In July, a man in the Indian city of Kolhapur was handed a death sentence for killing his mother and frying up her organs with the intention of eating them.

An eight-year-old neighbor found Sunil Rama Kuchkoravi covered in blood next to his mother’s disembowelled body in Aug. 2017. Kuchkoravi had placed the deceased victim’s heart on a plate and her rib in a bottle containing oil, salt and chilli pepper.

Police investigations revealed that Kuchkoravi murdered his mother for money. “The present accused not only brutally killed his mother but made her naked and inflicted blows… over her private part, cut down her breast, removed her heart and other parts of body, and was prepared to eat it,” said the court order.

“The intensity and the shamelessness of the act of the present accused… demands the capital punishment.”

7. No One Believed Him, So This Student Secretly Filmed His Own Sexual Assault

Police in the Pakistani city of Lahore arrested an Islamic cleric after a student documented his own sexual assault and released the video on social media. Two of the accused cleric’s sons were also arrested for threatening the student for leaking the video.

The video showed the sexual abuse incident, and then transitioned to the survivor accusing Aziz-ur-Rehman, the custodian at his religious seminary school, of assaulting him. “I didn’t get justice, neither did anyone believe me even though I spoke to many people around me,” the student said. “I’m taking my own life.” He went on to say he had gone into hiding after receiving threats from the accused and his sons. In a video statement, Rehman initially claimed that he had been drugged during the filming.

“The biggest proof is that my body was not even moving. If I were in my senses, how could I have not known that he was making a video from his phone?” Rehman said in the video. He eventually admitted to sexually assaulting the student in exchange for passing marks in his examinations. In October, Rehman and six others including his sons were indicted by a court for the case.

8. Man Went for a COVID Vaccine. He Came Back Sterilized Instead.

In the summer of 2021, the family of a disabled man in Uttar Pradesh, India claimed that a health worker had accompanied him to a hospital under the guise of a COVID-19 vaccination, but he was sterilised instead.

According to his family, Dhruv Kumar fell unconscious shortly after arriving home from the hospital. The family then rushed him to a medical facility for treatment. There, doctors informed them that Kumar’s condition was due to a sterilisation operation.

In interviews with local press, Kumar’s brother Ashok said that the health care worker, Neelam Kumari, had offered his sibling Rs. 3,500 ($47) in exchange for receiving the “vaccination.”

After the incident, Kumar’s family filed a police report against Kumari and demanded legal action against her. The hospital also launched an investigation in response to the claims.

9. They Lynched Him, Burnt His Body and Took Selfies With His Corpse

On a day that will be remembered as a “national shame” for Pakistan, a Sri Lankan factory manager accused of blasphemy was lynched to death and his body set on fire by a mob comprised by his co-workers and residents in Sialkot city.

The mob targeted Priyantha Diyawadanage after rumors circulated that he had been tearing stickers bearing the name of the Prophet Muhammad. Turning violent, the mob charged at Diyawadanage and dragged him to the street outside of the factory, where he was stripped of his clothing and mercilessly beaten with rocks and iron rods.

As they lynched Diyawadanage, the crowd chanted anti-blasphemy slogans coined by the extremist political party Tehreek-e-Labbaik Pakistan. The attackers then set Diyawadanage’s body on fire and took selfies with his burning corpse.

Police have so far arrested 182 people for the attack and have filed charges against a total of 900 people on murder and terrorism charges.

Diyawadanage’s wife Nilushi Dissanayaka denied the allegations of blasphemy against her husband. “I totally reject reports that said my husband tore down posters in the factory. He was an innocent man,” she told the media. Diyawadanage was reportedly a Christian, a minority in Muslim-majority Pakistan.