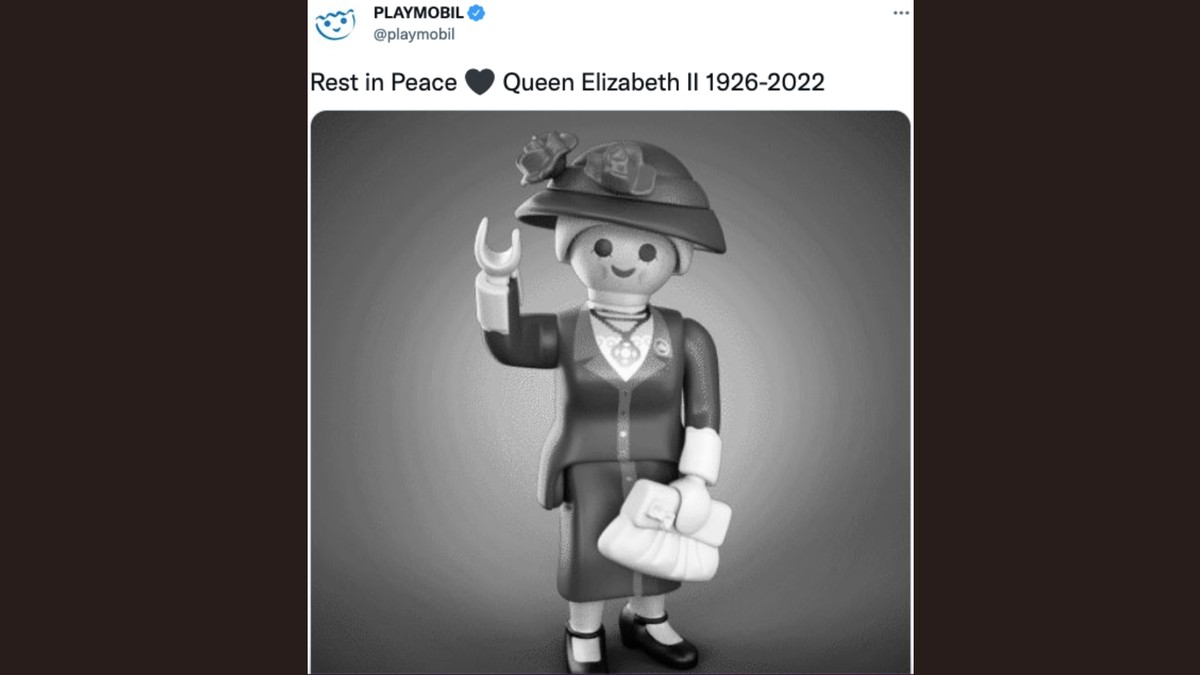 One of the many brand tweets about the Queen’s death. Twitter screenshot.

The companies who make sausage rolls, sex toys, baked beans, weapons, and cartoons for children want you to know that they, too, are very sad that Queen Elizabeth II died on Thursday.

A flurry of sober statements and questionable artwork hit Twitter in the hours after the Royal family announced the passing of the late Queen, who died at age 96 at Balmoral Castle in Scotland.

The Twitter account for Domino’s Pizza in the UK was quick to the draw, releasing their somber black and white statement around within an hour of the news that the queen had died.

“Everyone at Domino’s joins the nation and the world in mourning the death of Queen Elizabeth II,” they wrote. (They’ve since limited who can reply or view responses to their tweet). Domino’s competitor, Pizza Express, chimed in with their own statement a couple hours later. “Team Pizza Express is deeply saddened to hear of the passing of Her Majesty, The Queen,” they wrote in their statement. “Our thoughts are with the royal family at this time.”

“An inspiration for more than seven decades,” wrote Greggs, a popular chain selling baked goods. “We’re sorry to hear of the passing of Her Majesty The Queen. Thank you, Ma’am.

Krispy Kreme donuts also took the time to thank the queen for her “years of loyal service to the United Kingdom.”

Ann Summers, a multinational company specializing in sex toys and lingerie, weighed in, sharing a photograph of the queen taken when she was young.

“Thank you Ma’am, for everything – for women, for family, for our nation,” they tweeted. “Sleep well.”

Poundland, a variety chain store that promises prices as low as £1, also relayed their condolences on Twitter. “All us here at Poundland mourn your loss,” they wrote.

The UK account for the world’s largest defense contractor, Lockheed Martin, paused to pay their respects to the late queen, hailing her as a “remarkable Commander in Chief of the British Armed Forces.”

The German company Playmobil tweeted a black and white image of one of their toy figurines wearing queen regalia, along with a simple “Rest in Peace.”

Other emotional and solemn tributes came from the likes of Heinz, Sainsbury’s, and Cadburys.

But perhaps the most gut wrenching came from Paddington Bear’s twitter account. The beloved bear who, as the story goes, traveled from Peru to London, appeared in a video having afternoon tea with the queen to mark her Platinum Jubilee.

‘Thanks ma’am, for everything,” he wrote.