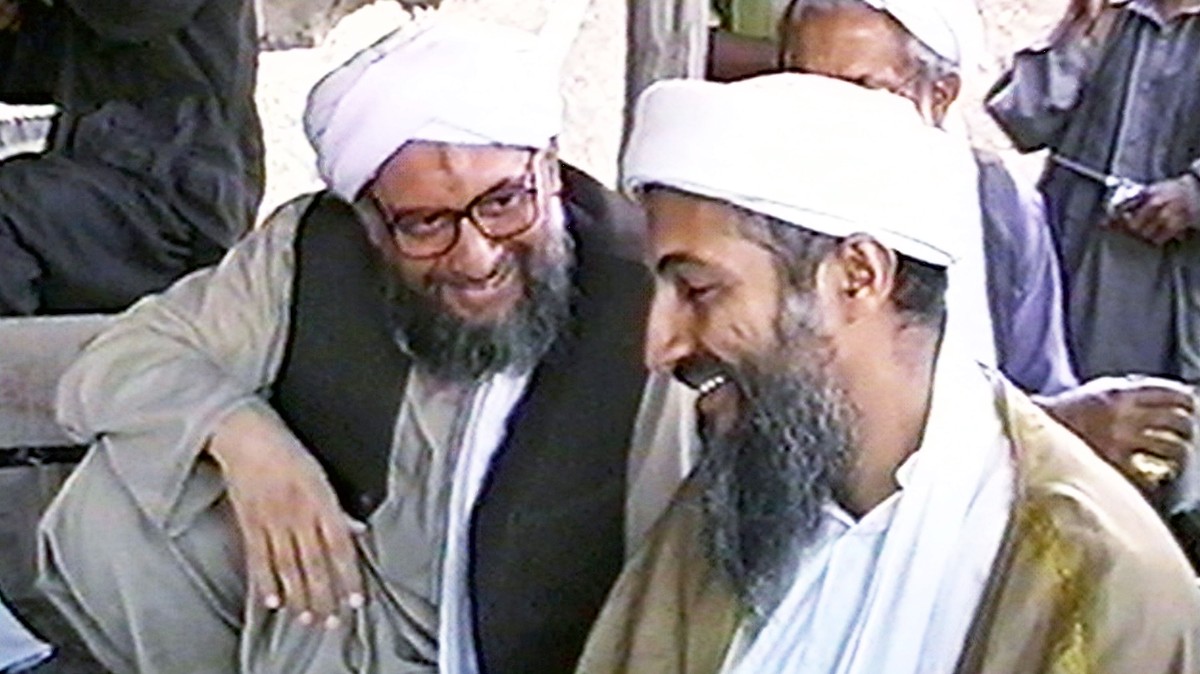 Archival footage from 1998 shows Ayman al-Zawahiri, then the second in command (left), with Osama Bin Laden, the leader of al-Qaeda, in Afghanistan. Al-Zawahiri was killed in a drone-strike after a 21-year U.S. intelligence manhunt. Photo: CNN via Getty Images

Before he was killed in a U.S. drone strike over the weekend, Ayman al-Zawahiri, a key 9/11 mastermind, was comfortably living in a wealthy neighbourhood in Afghanistan, according to U.S. officials.

Over the weekend, the White House announced that they took out al-Zawahiri of al-Qaeda, the notorious transnational Sunni Islamist extremist group, in an air strike in the heart of Kabul, Afghanistan’s capital. In a speech on Monday, U.S. president Joe Biden said the 71-year-old was “deeply involved” in planning the 9/11 terror attacks, which killed nearly 3,000 people and over 6,000 injured on American soil in 2001.

“No matter how long it takes, no matter where you hide, if you are a threat to our people, the United States will find you and take you out,” Biden said in a seven-minute address.

Where he was hiding, it turns out, was in Kabul’s bustling Sherpur neighbourhood, which is known to symbolise the country’s vast wealth divide.

Before al-Zawahiri was killed over the weekend, intelligence reports showed that he was leading a pretty plush life in plain sight right in the heart of Kabul.

A view of Sherpur neighborhood where Ayman al-Zawahiri was killed by US Drone strike. Photo: Sayed Khodaiberdi Sadat/Anadolu Agency via Getty Images

Experts look at al-Zawahiri’s location at the time of the attack as significant, giving key insights into the relationship between al-Qaeda and the Taliban, the extremist group which now governs Afghanistan.

“What’s surprising is the extraordinary hubris on the part of the Taliban officials to house al-Zawahiri in such a comfortable and somewhat safe neighbourhood – where a lot of top Taliban leadership lived too – and enabled him to stay here,” Vanda Felbab-Brown, a senior fellow in the Strobe Talbott Center for Security, Strategy and Technology at Brookings Institution, told VICE World News.

Michael Kugelman, the South Asia senior associate at the international think tank Wilson Center, said there was no way al-Zawahiri could have enjoyed such “hospitality” without the endorsement of top Taliban leaders. “This operation exploded the myth propagated by the Taliban that they no longer have ties to al-Qaeda,” he told VICE World News.

Felbab-Brown agrees, adding that it is that revelation that will have far-reaching impact. “Will al-Qaeda stop existing or organising? Absolutely not,” she said. “[But] this exposed the duplicity by the Taliban, and also stokes fears of retaliation.”

Al-Zawahiri is in the FBI’s most-wanted terrorist list with a bounty of up to $25 million, up until now. The former surgeon succeeded al-Qaeda founder Osama bin Laden, with whom he plotted the 9/11 attacks, as the group’s leader. Bin Laden was killed in 2011 in Pakistan by the U.S. Navy SEALs.

The New York Times reported that the safe house he was staying in was protected by the Haqqani network, the Taliban’s militant affiliate whose leader, Sirajuddin Haqqani, is wanted by the FBI and is currently the interior minister of the so-called Islamic Emirate of Afghanistan.

The U.S. drone fired two R9X “hellfire” missiles – a secret missile never publicly acknowledged by the Pentagon or the CIA but previously used to take down extremist leaders without major collateral damage – at al-Zawahiri as he stepped out onto the balcony of his safe house. U.S. officials told reporters he was living with his wife, daughter and the daughter’s children, but that nobody else was hurt. U.S. forces had been tracking him for months, and a Reuters report states that the CIA was responsible for the whole operation.

A UN report released just weeks before the drone strike stated that al-Zawahiri had inadvertently been giving proof of life to the U.S. intelligence and other monitoring bodies whenever he released videos from that location. The report further noted that his growing “comfort and ability to communicate” in the country coincided with the Taliban takeover.

“The relationship between the Taliban and Al-Qaida remains close, with the latter celebrating the former’s success and renewing its pledge of allegiance to Hibatullah,” says a May UN Security Council report, adding that Afghanistan continues to house core members of the al-Qaeda leadership besides al-Zawahiri.

“There have been repeated efforts to get the Taliban to sever their relations with al-Qaeda, and was one of the key negotiating points in the Doha Agreement,” said Felbab-Brown. “The Taliban promised it won’t allow attacks in other territories, but it always refused to provide a language to sever ties with al-Qaeda.”

One of the major ways the two groups kept close is the decades-long tradition of intermarriage, friendships and ideological sympathies between members and families of the two groups.

The 71-year-old al-Zawahiri started his career at age 15, when he formed his first cell to overthrow the Egyptian government. A surgeon by training, al-Zawahiri briefly worked in Pakistan’s Peshawar city where he treated anti-Soviet fighters wounded in battles in Afghanistan.

He mostly functioned in the shadow of bin Laden, who became a household name after the 9/11 attacks. In 1998, al-Zawahiri and bin Laden issued a fatwa saying, “To kill Americans and their allies, both civilian and military, is the individual duty of every Muslim able to do so, and in any country where it is possible.”

After bin Laden was killed, al-Zawahiri took over as the al-Qaeda chief and was responsible for growing its network. Under Taliban rule, the July UN report says, his task became easier, although the group “lacked an external operational capability” and didn’t want to cause the Taliban “international difficulty or embarrassment” right after the takeover.

Kugelman said al-Zawahiri wasn’t as “charismatic” and influential as bin Laden within al-Qaeda, and that many within the al-Qaeda ranks “may not be sad to see him go.” “Terror groups have shown they can weather leadership decapitations,” he said. “But al-Qaeda is a shadow of its former self, and so his loss won’t necessarily have a meaningful impact on its operational capacities, given that they were relatively modest to start with.”

The May UN report sees Mohammed Salahaldin Abd El Halim Zidan as al-Zawahiri’s possible successor. Zidan has been listed by various intelligence agencies as a high-ranking al-Qaeda member who was once responsible for bin Laden’s security. He was among those – including al-Zawahiri – indicted in the U.S. in connection to the 1998 bombings of U.S. embassies in Tanzania and Nairobi.

For now, the drone strike provided some recompense to those who lost their kin to the activities of al-Qaeda. “I have a personal account to close with al-Qaeda, more so with al-Zawahiri, the ‘ideologist’, than with bin Laden or Khalid Sheikh Mohammed, the executioners of our son, Daniel,” tweeted Judea Pearl, whose son, American journalist Daniel Pearl, was abducted and executed by the al-Qaeda in 2002. “Today, I feel an inch closer to closure.”