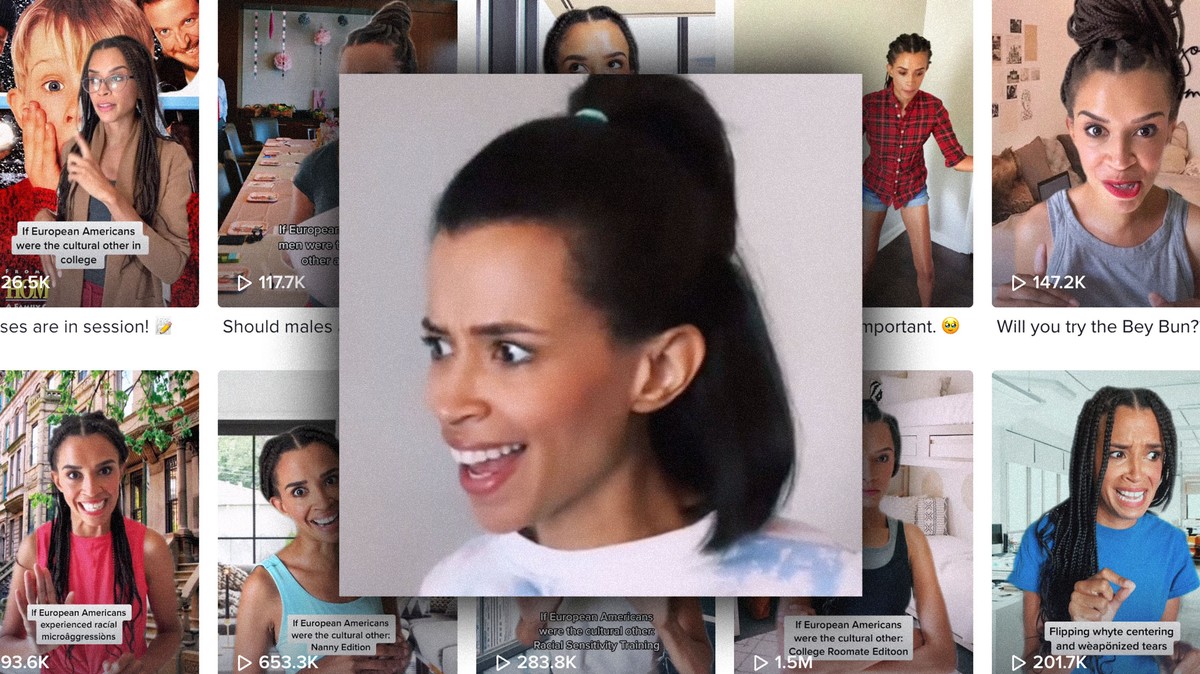 The parallel universe Clare Brown creates on TikTok, like the one we live in, is largely guided by privilege and power. Except in this place—constructed in videos written and directed by Brown, who also plays all the characters—the social hierarchy is ordered entirely from the Black gaze.

In her brilliant and disruptive videos, Black people run the boardrooms and newsrooms, and white people (here, they’re wryly known as “European Americans”) live on the fringes of society as people without color (PWOC). New York is “New Nigeria,” Nat Turner is celebrated instead of Robert E. Lee, and the Cleveland Colonizers and Washington Whiteskins are popular sports teams.

In these inversions of mainstream cultural markers, Brown challenges how rarely society interrogates Eurocentrism. Her dialogue, written entirely in microaggressions, underscores how racism doesn’t just manifest as violent acts: The casual instances of bigotry in everyday conversations, which are meant to assert dominance over marginalized people, are what Brown recognizes as “death by a thousand cuts.”

“There’s a universal misunderstanding of the word ‘microaggression,’ because it makes it seem like we should be more concerned with ‘big’ or ‘real’ aggressions,” Brown told VICE. “I wanted to show that the impact is always catastrophic for the person receiving it.”

Brown’s videos lean into the term “European American,” a phrase rarely if ever used in real life, despite the ubiquity of terms like “African American” and “Asian American.” The genius of Brown’s videos is that they examine ownership of Americana by treating whiteness as the other. In one skit, she addresses Eurocentric beauty standards, playing a hair stylist who charges extra to style straight hair because it’s too difficult to work with. In another, she laughs at a depiction of a blonde-haired, blue-eyed Christ: “That’s not Jesus! Could you imagine?” In these exchanges, she often speaks directly to the viewer as though she’s addressing a white woman called Megan, whose name is commonly mispronounced as Margin, as if she was an unofficial spokesperson for her entire race—even as she is often silenced and gaslighted.

Since creating these vignettes, Brown said she’s gotten an influx of DMs from European Americans who see themselves or their family members in the language she presents as humor. Although her videos can be considered anti-racist work, Brown is clear about her target audience. “I make these videos for Black women, because we often get people telling us we’re not pretty or smart enough,” she said. “It’s important for me to show camaraderie and validity to those experiences. You’re not wrong. You’re just living in the upside-down.” VICE spoke with the TikTok creator about how she makes her videos to put things back in perspective.

VICE: What inspired you to start this series?

Clare Brown: I started it on a whim about six months after George Floyd’s murder. What followed online was that there were lots of white people saying things like, “This is crazy. I had no idea things like this happened.” Then, you had the Black community sharing their experiences and saying, “This happens all the time.” Microaggressions are little instances that slowly build to why we accept this level of public violence toward Black people.

The Black community, or really that of any person of color, knows that’s not necessarily true. Racism is baked into the way that we speak, interact, and move around into the world. I didn’t think that white people would understand it unless they were at the center of what it feels like and what it sounds like.

These skits largely live on TikTok, which can be a very weird place for Black creators. Did you receive a lot of pushback in that space?

I have gotten banned twice. I think I’ve been the victim of people mass reporting me quietly, where I haven’t been able to post for a week or two, but surprisingly, I haven’t gotten any visual pushback. I try really hard to make every video something I’ve experienced, seen, or heard. I try to present my videos in a way that you cannot ignore. There is no room for argument, because I’m saying things we have all heard.

I get way more pushback on Instagram, probably because it’s an older audience, but it’s lots of older, white men who are deeply upset by my videos. The argument is usually what we tend to hear: You are racist for drawing attention to racism. By discussing your experience, you’re the person who is racist.

You mentioned that most of these are pulled from personal experiences. Can you share what your upbringing was like? You have an outlet to share those experiences now, but how did you cope with microaggressions then?

My father was in the Navy, so we moved every two years, and it really depended on where we were living. The schools I went to were usually very white, and our peers and the people in our community were also very white. Living in the south in the 90s, lots of Black families were the “first” to do something: I was told, “You are the first little Black girl that we’ve had in this class.” In middle school, I was one of two Black people in the whole school. I have these notebooks of things that were said to me throughout my life. I look at those and make videos based on those situations, because I have had so many experiences where I was the only person of color, period, for miles. When I moved to Harlem after grad school, my friend group was pretty much all people of color, but I was working in an all-white setting then, too.

I rarely experienced the overt racism that you see in the movies where people throw drinks on you because you’re Black. It was always just bubbling under the surface.

I’m fluent in coded racism, which is why it’s hard for people to deny what I say in my videos. I speak that language, because it’s what I’ve always heard. For white people to hear it spoken back to them is almost like, Oh, they know.

It’s a dog whistle, but still blatant, which calls back to the idea that Black people are intellectually inferior or not perceptive people.

Exactly. We know what it means to use words like “traditional” or “all-American.” These are all phrases that perpetuate white supremacy. Racism doesn’t have to be pulling people out of their house and lynching them. What maintains white supremacy in a society? Microaggressions and language are at the foundation of that. My hope is that my page shows what Black people have been trying to say: We inherently live in a white supremacist society, and everything we do reinforces that in some way—down to the way we speak.

How did the microaggressions you experienced change from school to the workplace? Harlem is certainly different from the rural south, but the corporate world is also very different from Harlem.

The majority of the really hurtful microaggressions I ever experienced happened in school. Kindergarten to 12th grade was trial by fire. When I worked in Manhattan, the city was filled with liberals who were desperate to be seen as woke—but I worked in the beauty industry. The whole concept of our brand was to uphold white supremacy. You’d hear things like, “Does that model have the right look for the brand?” People weren’t touching my hair, but they still operated in a space that was meant for them. My videos reflect being in an environment that’s not meant for you and what it feels like when you try to push back against that.

I came across your videos at the same time that everyone began talking about microaggressions going on in this season of Big Brother, where the entire house is attacking Taylor Hale for existing. The members are terrified of being perceived as racist, but continue to let it manifest in the house.

I do think that, for a white person, being called racist is the worst thing that can happen to you—not necessarily committing a racist act. To teach white children “not to see color” is to not teach them to examine differences and acknowledge that everyone has a different lived experience.

Black people are constantly talking about race and how we fit into society based on race. What I’ve learned from doing this series is how much white people are able to exist without ever coming in contact with a person of color.

When you start using words like ‘ethnic’ or ‘diverse’ to talk about something that is white, you get this friction.

It’s the idea that anything that is created by someone white is European or tribal and exotic. You feel the tension of what it feels like to be otherized or a monolith when you move through a society where everything is not defaulted to you.

How long does it take you to flip locations that we rarely interrogate, due to conditioning, and flip it to an alternate reality?

Not long. We accept New York as York from England. I find places, usually in West Africa, to completely strip Europe from the narrative. Our heroes would be people like Nat Turner, people who fought for the freedom of Black people at any cost.

People push back on that and say, “Oh, but he killed little kids.” But he was a hero. We accept going to Robert E. Lee High School and being Rebels. In this world, we go to Nat Turner High, and we’re the Freedom Fighters. We ignore that most of the white heroes were horrible men who committed horrible human rights atrocities. We’re just like, “That’s fine.”

You brought up Margin earlier. How do you develop her as a character even though she doesn’t have a face or any lines?

I wanted to create a character who felt a lot like myself. She’s a PWOC (a person without color) in a space where everyone who has power is a person of color. She started off as a way to talk about work microaggressions, but I started thinking about what it would look like if she started pushing back. I wanted to show how fruitless those efforts would be. How quickly they would always fall apart. How immediately she would be silenced, and how quickly the default is to consider the majority’s feelings and thoughts.

People ask if they will ever meet Margin. I don’t think I’d ever give her a face and a voice. People would naturally center her as being the white woman you empathize with in the situation, because that’s what you’ve been conditioned to do. I get comments that people are starting to feel bad for Margin. Do you feel bad for the only Black girl in your office? Probably not. You’re probably not even thinking about her.

Kristin Corry is a senior staff writer for VICE.