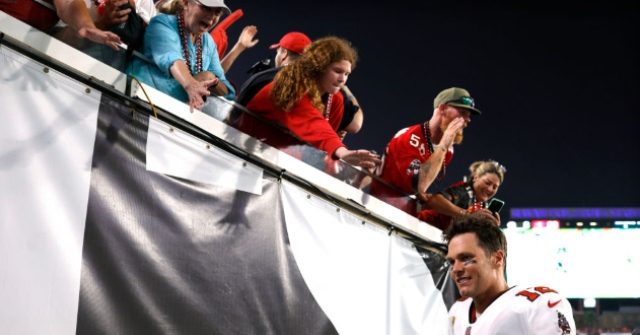 .@TomBrady surprised 10-year-old brain cancer survivor Noah Reeb with Super Bowl tickets. This is what it’s all about ❤️ pic.twitter.com/Qo6QdjM1qI

As he listened to a message from the seven-time Super Bowl champion, Noah donned a Brady Bucs jersey and what looks to be the “Crucial Cap” – a hat marketed by the NFL to raise cancer awareness – that Brady gave him after the Week Seven game.

“Hey, Noah, what’s up, man? Happy New Year, I know it’s been a while. I hope you’ve been enjoying the season so far,” Brady began.

“We’re grinding, getting ready to start the playoffs, but earlier, you held up that sign that I helped you beat brain cancer, well listen: your fight – you’ve inspired so many people, including myself, but millions of others also, and the NFL and the Bucs look forward to sending deserving fans to the Super Bowl each year, and fans that have incredible stories like the one you’ve had,” the three-time MVP continued.

“So as a thank you, I worked with both the Bucs and the NFL to get you and your family Super Bowl tickets this year in LA!” Brady told the 10-year-old. We certainly hope to be there, but I know you’re going to be there. It’s going to be really cool for all of us. Glad to see you are doing well. Take care, man, and enjoy the tickets. Let’s go.”

An elated Noah then opened up a package containing the tickets.

Early in 2021, “Brady sent Noah a video message urging him to hang tough during his treatments,” said James Brown of Inside the NFL in October.

“When we first got the video, Noah had already undergone two brain surgeries within a three-week span,” Noah’s mother, Jacque Reeb, stated in October.

“He used to replay it in the hospital when he was going through hard times,” she went on to add. “We’d watch the video and remind him that ‘you know what, Tom Brady thinks your tough, you must be pretty tough.’”

Noah surprised Brady with his attendance at the Buccaneers’ home game against the Bears on October 24. His sign caught the eye of one of Brady’s teammates, and the Buccaneers player alerted the quarterback to the message, according to Inside the NFL.

After the game, Brady sought out Noah, placed his “Crucial Cap” on the youngster’s head, and shook his hand. Noah was left in tears, visibly overcome with joy.

“It was crazy. I didn’t believe it. It was crazy. I was so blessed and so grateful,” Noah later said of the interaction. “As soon as he looked at me, I started crying”

After the game, Brady said that the boy’s plight “Puts a lot in perspective, what we’re doing on the field. In the end, it doesn’t mean much compared to what so many people go through.”

“We all try to make a difference in different ways, and I think so many guys commit times to their foundations and to doing good things for the world,” Brady added. “And the NFL does a lot of great things, so it’s just nice to — I always think you know do the best that you can do, under any circumstance. It was nice to see.”

The Buccaneers’ first playoff game takes place at 1:00 p.m. EST Sunday at home against the Philadelphia Eagles. Brady and the Bucs hope to take the first step towards meeting Noah at the Super Bowl in Los Angeles on February 13.