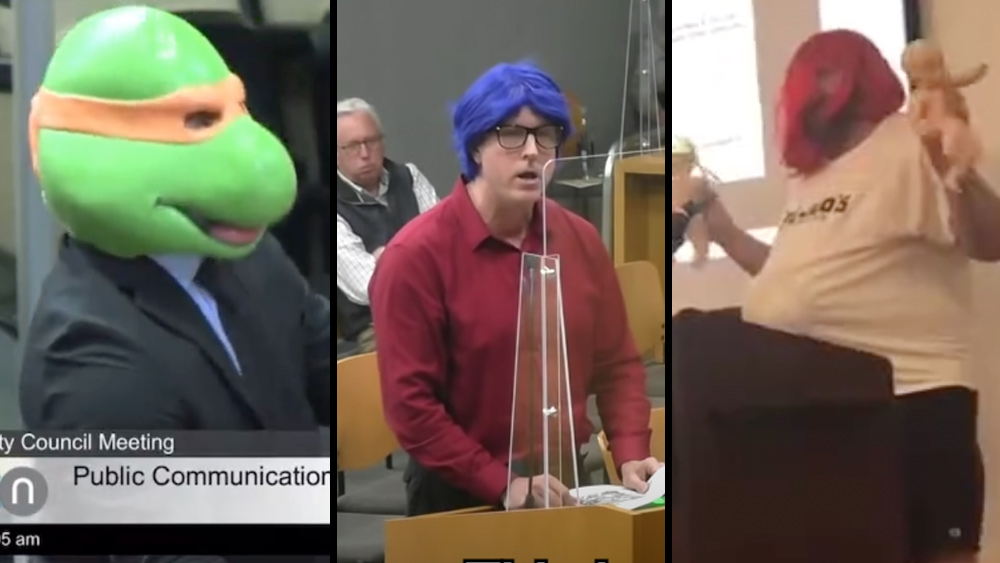 Activists are hitting their local city council meetings to call out the liberal lunacy promoted by the left, targeting everything from pointless mask mandates to the LGBT trans indoctrination.

In Texas, a man wearing a Teenage Mutant Ninja Turtle mask appeared before the Austin City Council to voice his support for mask mandates.

Convos on the Pedicab podcast host Alex Strenger pulled the hilarious stunt, telling the council members they should definitely reinstate their Orwellian mask mandate in order to save lives.

We need to reinstate the mask mandates 😷 pic.twitter.com/iwATZchxWE

“Right now the greatest emergency we are facing is Covid, and that is why I am wearing a mask and that is why we need to reinstate the mask mandates,” Strenger told the City Council.

“I’m wearing this mask to let you know that I take Covid seriously because I believe in science, and because I want to protect your grandmother.”

As usual, Alex Jones was light years ahead of this trend:

Media commentator Mark Dice also dressed up as his progressive liberal alter-ego “Jimmy Saville” during a troll of the Encinitas, Cali., City Council, where he expressed his frustration in having to explain to city leaders that there are more than 57 genders, according to ABC News and Facebook.

Dice goes on to jokingly claim he’s had to drive his gender-confused child “Baphomet” to Tijuana to have sex reassignment surgery after no one in the San Diego-area would perform the procedure.

In another stunning and brave testimonial, activist Alex Rosen attended a city council meeting wearing a pink wig to express his discontent with the Supreme Court decision to end Roe v. Wade.

“The only ‘Roe’ that needs to be revoked is Death Row for minorities in prison,” he says.

Rosen then performs a mock abortion, sacrificing two baby dolls to appease Hillary Clinton, which he claims will enter him into a drawing to win an “Adrenochrome-book” laptop.

It’s great to see more activists get inspired to carry out these acts of civil meme activism. Go out and troll your local city council or school board today!