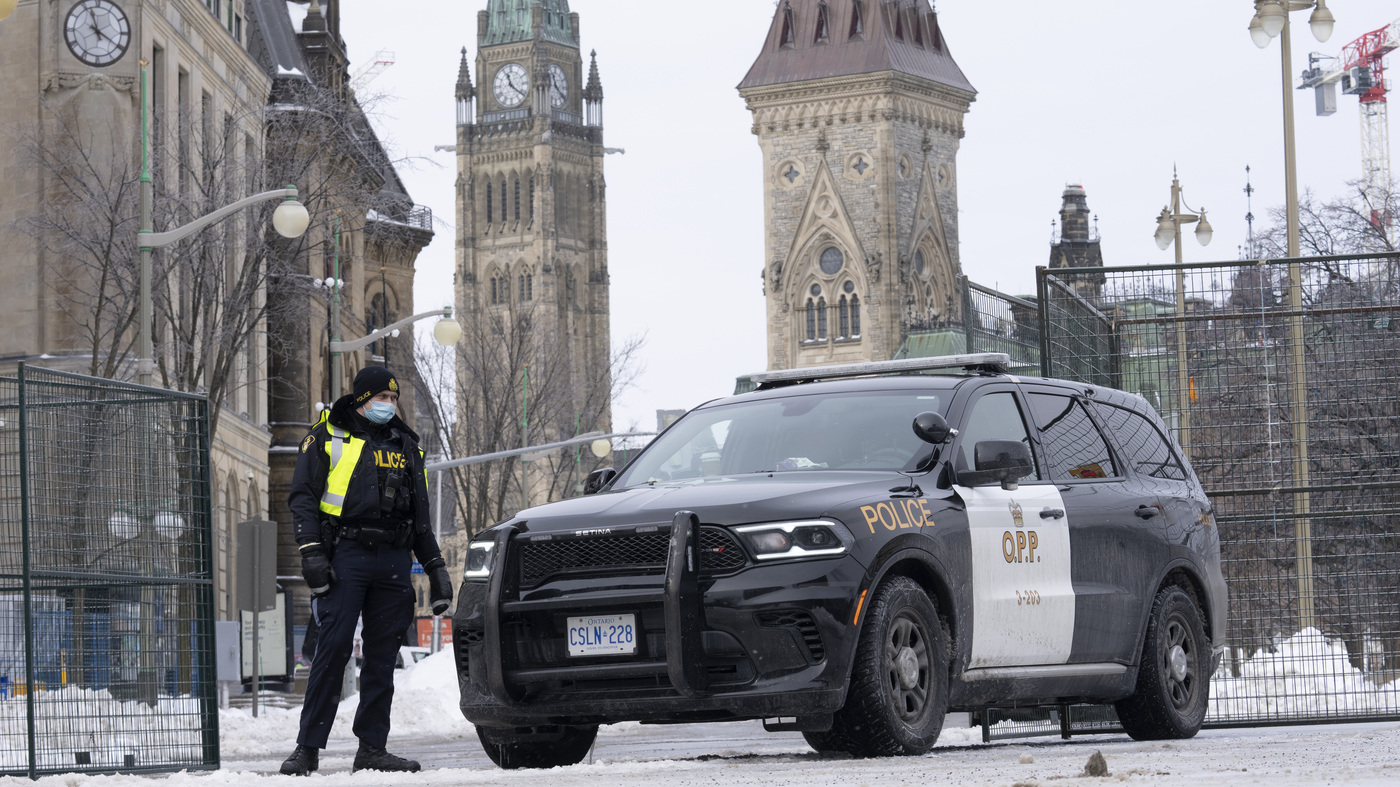 A police officer mans a checkpoint near Parliament Hill on Wednesday in Ottawa. Ottawa protesters who vowed never to give up are largely gone, chased away by police in riot gear in what was the biggest police operation in the nation’s history.

A police officer mans a checkpoint near Parliament Hill on Wednesday in Ottawa. Ottawa protesters who vowed never to give up are largely gone, chased away by police in riot gear in what was the biggest police operation in the nation’s history.

TORONTO — Canadian Prime Minister Justin Trudeau announced Wednesday he is removing emergency powers police can use after authorities ended the border blockades by those opposed to COVID-19 restrictions as well as the occupation of downtown Ottawa.

Trudeau invoked the powers last week and lawmakers affirmed the powers late Monday. Trudeau said then the powers were still needed but noted they would not stay in place a day longer than necessary.

“The situation is no longer an emergency, therefore the federal government will be ending the use of the emergencies act,” Trudeau said. “We are confident that existing laws and bylaws are sufficient to keep people safe.”

The trucker protest grew until it closed a handful of Canada-U.S. border posts and shut down key parts of the capital for more than three weeks. But all border blockades have now ended and the streets around the Canadian Parliament are quiet.

“We were very clear that the use of the emergencies act would be limited in time,” Trudeau said. “We said we would lift it as soon as possible.”

Trudeau had warned earlier this week there were some truckers just outside Ottawa who might be planning further blockades or occupations. His public safety minister also said there was an attempt to block a border crossing in British Columbia over the weekend.

The Royal Canadian Mounted Police said those who had their bank accounts frozen were “influencers in the illegal protest in Ottawa, and owners and/or drivers of vehicles who did not want to leave the area.”

The protests, which were first aimed at a COVID-19 vaccine mandate for cross-border truckers but also encompassed fury over the range of COVID-19 restrictions and hatred of Trudeau, reflected the spread of disinformation in Canada and simmering populist and right-wing anger.

The self-styled Freedom Convoy shook Canada’s reputation for civility, inspired convoys in France, New Zealand and the Netherlands and interrupted trade, causing economic damage on both sides of the border. Hundreds of trucks eventually occupied the streets around Parliament, a display that was part protest and part carnival.

For almost a week the busiest U.S.-Canada border crossing, the Ambassador Bridge between Windsor, Ontario and Detroit, was blocked. The crossing sees more than 25% of the trade between the two countries.

Authorities moved to reopen the border posts, but police in Ottawa did little but issue warnings until Friday, even as hundreds and sometimes thousands of protesters clogged the streets of the city and besieged Parliament Hill.

On Friday, authorities launched the largest police operation in Canadian history, arresting a string of Ottawa protesters and increasing that pressure on Saturday until the streets in front of Parliament were clear. Eventually, police arrested at least 191 people and towed away 79 vehicles. Many protesters retreated as the pressure increased.

A small convoy of truckers demanding an end to coronavirus mandates began a cross-country drive from California to the Washington, D.C., area on Wednesday.

Several hundred people rallied in a parking lot in the cold, windswept Mojave Desert town of Adelanto before about two dozen trucks and a number of other vehicles hit the road. It wasn’t clear how many intended to go all the way.