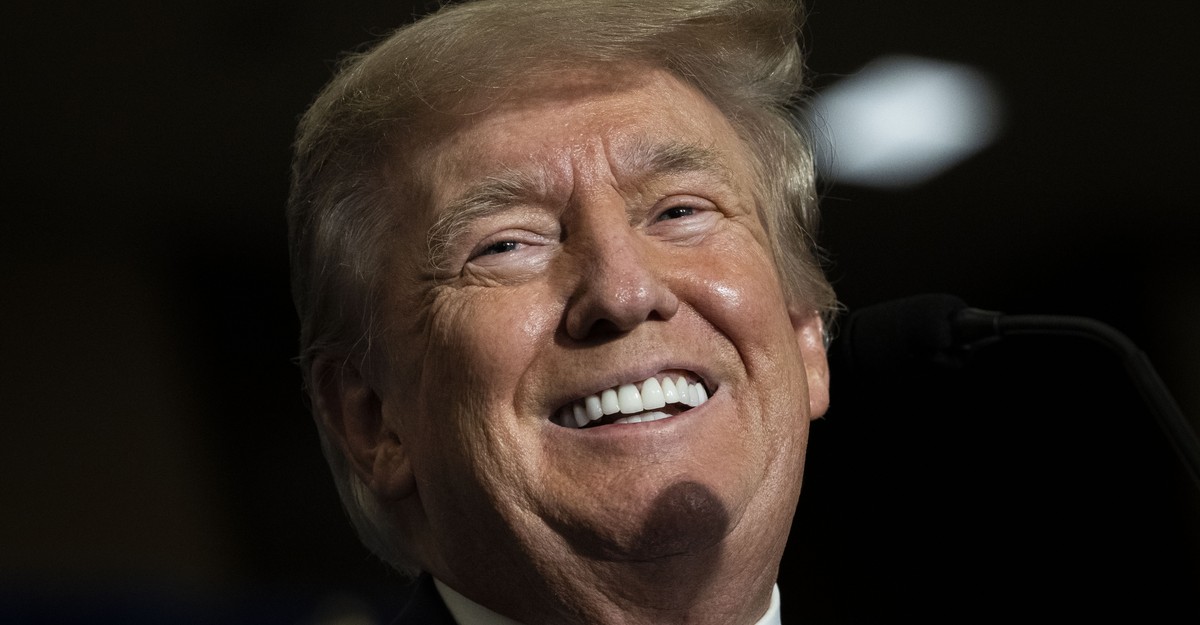 Donald Trump returned to Washington, D.C., for the first time since leaving office in a show of support for the organization trying to make MAGA more than just vibes.

By now you probably know that Donald Trump came back to Washington, D.C., yesterday for the first time in more than a year, and, in a speech that I attended, offered a little taste of what he’d do with a second chance at power. (Hint: It seems pretty sinister!) But maybe just as important as what the former president said is where he said it.

Trump spoke at the first annual summit of the America First Policy Institute, an organization launched by former administration staffers and allies of his who are now working to translate Trump’s whole schtick into a policy framework. You can think of AFPI as a kind of MAGA think tank, or a grown-up Turning Point USA. And understanding this group matters, because if Trump—or, frankly, any other MAGA-style Republican—runs in 2024, he will have something that didn’t exist before: a bank of advisers prepared to back up his rants and grievances with actual legislative proposals. The institute “is going to do for the next few years what the Heritage Foundation did in 1979, 1980” for Republican politics, former House Speaker Newt Gingrich told the audience: provide a set of rules and guidelines to help the party achieve electoral success. (Never mind that the magic of Trumpism has always seemed to be that it never adhered to rules at all.)

The two-day summit can best be described as an elevated Trump rally—a Trump rally for the swamp-dwelling elite, if you will. Instead of a fairgrounds or concert venue, it was held in the basement ballroom of a Washington, D.C., Marriott. Instead of burgers and fries sold from food trucks, mini croissants and bottles of Perrier were on offer. And where country music or classic rock might have been blasting over the sound system, the event hosts played soft and slightly grating Muzak between panelists.

The America First agenda was helpfully outlined on glossy paper and passed around to attendees, listing panels like: “Make the Greatest Economy in the World Work for All Americans”; “Give Parents More Control Over Their Children’s Education”; and “Finish the Wall, End Human Trafficking, and Defeat the Drug Cartels.” Speakers included state and local leaders, as well as Minority Leader Kevin McCarthy and Senators Ted Cruz, Rick Scott, and Steve Daines. During panel discussions, I sat between reporters from The Epoch Times, Breitbart, and something called American Liberty News.

The AFPI isn’t the only organization formulating the intellectual underpinnings for Trumpism. The Claremont Institute has worked on this, and so has American Greatness magazine. But all of these “America First” efforts boil down to three broad pillars, William Galston, a senior fellow at the nonpartisan research group the Brookings Institution, told me. First is a reexamination of America’s international deals and commitments through a transactional, what’s-in-it-for-us lens. The second is the development of an economic agenda that appeals to working-class voters who’ve recently joined the party’s ranks—without necessarily resorting to big-government solutions. The third “is a vigorous, deep, no-holds-barred waging of the culture wars,” Galston said.

Still, despite the panel titles and a few strange guests (“Stop the Steal” candidates Mark Finchem and Kristina Karamo; hosts from the delusional Right Side Broadcasting Network), the event itself was stuffy and occasionally boring, like any other D.C. political conference. It failed to capture the freewheeling, wild energy of a Trump rally—the vibes that made Trump so successful. Even Trump sounded sleepy when he started to speak yesterday, reading his 2024 policy plans off a teleprompter. After all, policy specifics have never really been his thing.

It wasn’t until he went off script with a few jokes about transgender athletes that Trump really seemed to get animated. Then, toward the end, he repeated a familiar refrain to his biggest applause of the night—a refrain that apparently works at rural rallies and D.C.-swamp events alike. “I ran for president; I won. Then I won a second time,” he said. “Did much better the second time; did a lot better.”

Why Americans Hate the Media

(A 1996 story from the Atlantic archive)

In the late 1980s public-television stations aired a talking-heads series called Ethics in America. For each show more than a dozen prominent citizens sat around a horseshoe-shaped table and tried to answer troubling ethical questions posed by a moderator. The series might have seemed a good bet to be paralyzingly dull, but at least one show was riveting in its drama and tension.

Read. Under the Glacier is an audacious novel that blends soulful ideas with hilarious details.

Watch. Reservations Dogs is as fresh as a sitcom gets. It comes back for a second season on August 3, so catch up on Hulu now.

Although my day job often involves covering Trump and threats to democracy in America, I don’t always write about that. If you’re looking for some lighter, non-politics fare—something I deeply understand!—you might enjoy my recent story on the majesty of the Virginia opossum. Or, if you’re more of a bird person, take a look at my 2017 story arguing that the American crow deserves a lot more credit. Either way—enjoy. I’ll be filling in on the Daily for the next few days. See you tomorrow!