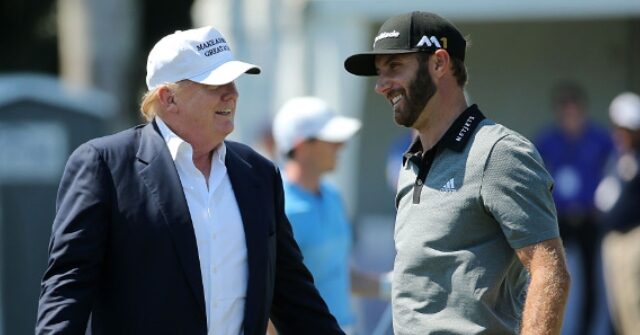 Donald Trump announced on his Truth Social that he will attend the LIV Golf Invitational at his Bedminster course and golf with pros Dustin Johnson and Bryson DeChambeau ahead of the event.

On Wednesday morning, the former president told Truth Social followers, “Just arrived in Bedminster for the big LIV Tour Golf Tournament. Record money to winners, great excitement. Come on out on Friday, Saturday or Sunday to watch the great play by the best players!”

Later in the day, the New York Post confirmed that Trump was set to play a round with pros Johnson and DeChambeau.

Other big names who have announced that they are attending the event include Charles Barkley, Caitlyn Jenner, and Lawrence Taylor.

Let’s have so much fun at this pro-am @LIVGolfInv pic.twitter.com/QJtOnXWkJ7

Barkley has been under fire for considering taking Saudi “blood money” by agreeing to broadcast from the LIV tournaments. Still, he has also noted that the new league has not yet made him an official offer and even claims to have given the LIV a deadline for an offer.

Sports analyst Charles Barkley makes a play on the 18th green during Round Two of the 2022 American Century Championship at Edgewood Tahoe Golf Course on July 9, 2022, in Stateline, Nevada. (Isaiah Vazquez/Clarkson Creative/Getty Images)

Both Trump courses, Trump National Golf Club in Bedminster, New Jersey, and Trump National Doral in Miami, Florida, have become targets of criticism from a 9/11 family group upset that the courses are working with the Saudi-backed league.

“It is incomprehensible to us, Mr. Trump, that a former president of the United States would cast our loved ones aside for personal financial gain,” the group wrote this month.

Trump finally did respond to the group’s criticism this week but demurred from commenting too much on the situation.