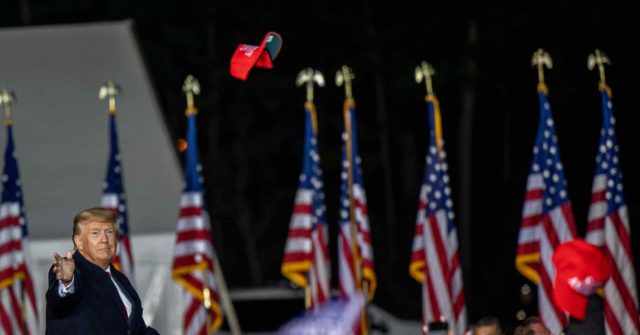 Former President Donald Trump used a rally speech in Conroe, Texas, on Saturday night to issue a warning to activist prosecutors who are continuing to pursue him in an attempt to discover unnamed crimes, more than a year after he left office.

Trump recounted all of the various efforts to investigate him since before he took office, including the “Russia collusion” hoax and other investigations, all of which found nothing except for an ongoing claim about “fringe benefits” in his business.

“This has been going on as long as you’ve known me. It will continue as long as I’m leading in the polls like I am, both against all Republicans and all Democrats, and we’re leading by a lot,” Trump told the crowd.

“It really is prosecutorial misconduct at the highest level. These prosecutors are vicious, horrible people. They’re racists, and they’re very sick. They’re mentally sick. They’re going after me, without any protection of my rights by the Supreme Court or most other courts. In reality. They’re not after me, they’re after you, and I just happen to be the person that’t in the way. That’s what they’re after. It’s been going on for years.”
Many Democrats seek office promising to prosecute Trump, especially in New York, where he was based until transferring his residence to Florida. Recently, a grand jury in Georgia began investigating his efforts to contest the 2020 election results.

“So think of it: so I’ve got the firm of Chuck Schumer’s radical left brother, all these Never Trumpers working full time in the prosecutor’s office to get Trump, because they couldn’t do it before, because they had nothing after all these years,” he told the crowd in Texas.

“If these radical, vicious, racist prosecutors do anything wrong or illegal, I hope we are going to have, in this country, the biggest protests we have ever had, in Washington DC; in New York, in Atlanta and elsewhere, because our country and our elections are corrupt. They’re corrupt.”

Trump mocked prosecutors for focusing on him when crime is surging in New York and other Democrat-run cities.

Trump also promised to consider pardons for those prosecuted in connection with the January 6 Capitol riot who were being treated “unfairly.”