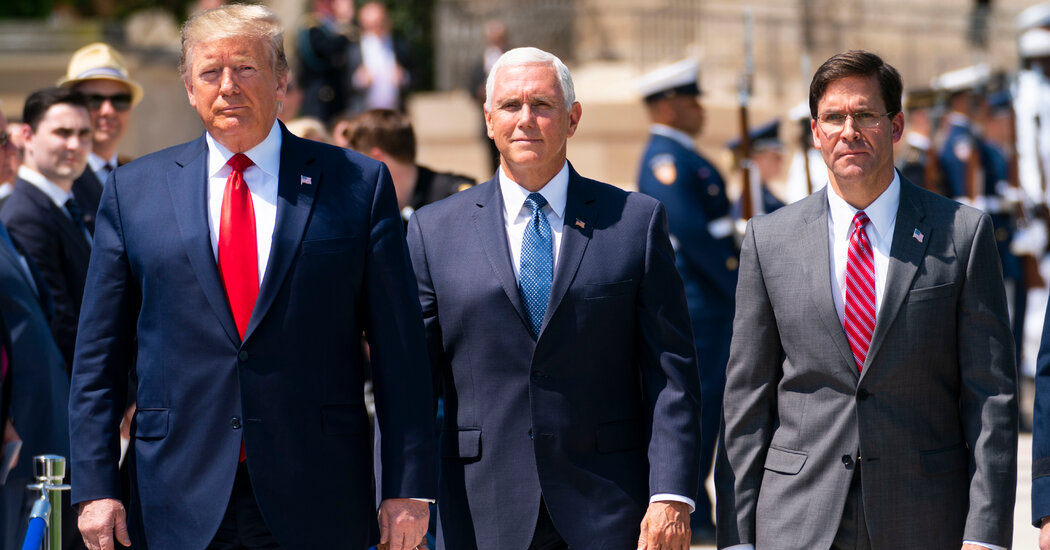 In his new book “A Sacred Oath,” released earlier this week, Mark T. Esper, the former defense secretary, revealed that President Donald J. Trump in 2020 had floated the idea of launching missiles into Mexico to “destroy the drug labs” and asked why the military could not “just shoot” racial justice protesters in Washington in the legs.

Mr. Esper also described his concerns that Mr. Trump might misuse the military during the 2020 election, for example by asking soldiers to seize ballot boxes.

On Monday, when a Fox News host asked if he thought President Trump “was a threat to democracy,” Mr. Esper was blunt.

“I think that given the events of Jan. 6, given how he has undermined the election results, he incited people to come to D.C., stirred them up that morning and failed to call them off, to me that threatens our democracy,” he said.

Mr. Esper replied: “What else can you conclude, Bret?”

That comment, from a man who has also served as secretary of the Army and chief of staff of the conservative Heritage Foundation, was seen by some as a startlingly direct condemnation. But Mr. Esper was not the first former Trump administration official to go beyond criticisms of President Trump’s temperament or specific policies to say he posed a threat to American democracy itself.

Here is a compilation of comments by Mr. Esper and other former officials, made during and after President Trump’s term in office.

“It was a very troubling event. The moment, it was an insurrection, an attempt to overturn a free and fair election and to prevent the peaceful transfer of power. And it [sic] was right to be impeached.”

— Interview with Judy Woodruff, “PBS NewsHour,” May 6, commenting on the Jan. 6 insurrection

“Everybody’s showing their fealty to them, he’s on his revenge tour to people who dared to vote for impeachment. I want to just warn people, once he takes office, if he were to win, he doesn’t have to worry about re-election anymore, he will be about revenge, he will probably have some pretty draconian policies.”

MILES TAYLOR, chief of staff, Department of Homeland Security (February 2019-September 2019) and author of the anonymously published book “A Warning”

“I’m still astounded by the countless Trump officials who privately agreed with me that he was a threat to democracy yet *still* remain silent. Why?”

“What happened on Capitol Hill yesterday is a direct result of his poisoning the minds of people with the lies and the frauds.”

— Interview with Chuck Todd on “Meet the Press,” Sept. 27, 2020, commenting on President Trump’s refusal to commit to a peaceful transfer of power if he lost the election

“The concern I have, speaking as a conservative Republican, is that once the election is over, if the president wins, the political constraint is gone. And because he has no philosophical grounding, there’s no telling what will happen in a second term.”

— Interview with Martha Raddatz, ABC News, June 21, 2020, in which he also said President Trump posed a “danger for the republic”

“When I joined the military, some 50 years ago, I swore an oath to support and defend the Constitution. Never did I dream that troops taking that same oath would be ordered under any circumstance to violate the constitutional rights of their fellow citizens — much less to provide a bizarre photo op for the elected commander in chief, with military leadership standing alongside.”

“We know that we are better than the abuse of executive authority that we witnessed in Lafayette Square. We must reject and hold accountable those in office who would make a mockery of our Constitution.”

— Statement published by The Atlantic, June 3, 2020, following the clearing of protesters from Lafayette Square in Washington, D.C.

“If our leaders seek to conceal the truth, or we as people become accepting of alternative realities that are no longer grounded in facts, then we as American citizens are on a pathway to relinquishing our freedom.”

“If we do not as Americans confront the crisis of ethics and integrity in our society and among our leaders in both the public and private sector — and regrettably at times even the nonprofit sector — then American democracy as we know it is entering its twilight years.”