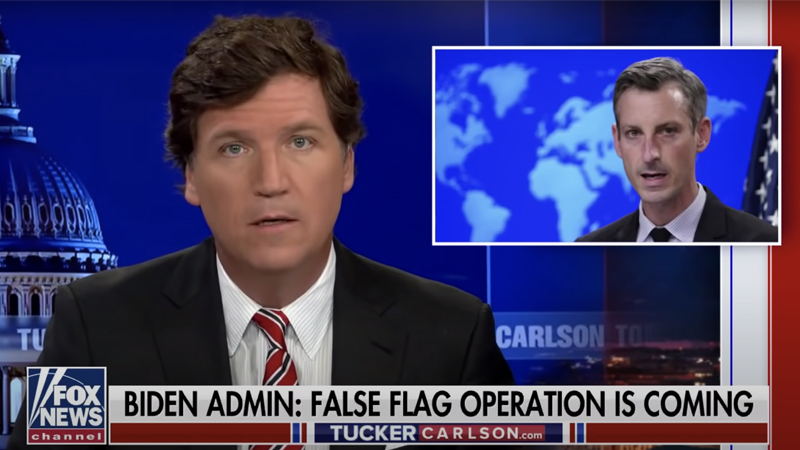 In his Friday monologue of “Tucker Carlson Tonight”, Carlson excoriated State Department spokesman Ned Price for accusing Russia without evidence of planning to “conduct a false flag operation” in Ukraine.

“Wait a second, what was that? A false flag operation? Really? That is a jarring term to hear from a Joe Biden employee much less an official,” Carlson said.

“Because until yesterday we were under the impression false flag operations didn’t exist. And if they did exist it was only within the diseased imagination of ‘conspiracy theorists’ like Alex Jones and his minions in QAnon. That’s what they told us.”

In fact, as Carlson explained, reporter Matt Lee invoked Alex Jones when probing into the State Department’s claim that Russia was preparing to stage a false flag as pretext to invade Ukraine.

MATT LEE: This is like crisis actors, really? This is like Alex Jones territory you’re getting into now. What evidence do you have to support the idea that there is some propaganda film in the making?

NED PRICE: This is derived from information known to the U.S. Government, intelligence information that we have declassified.

The difference between Alex Jones and Price, however, is that Jones is actually credible, according Carlson.

“He claimed to have information that he did not have, and Matt Lee persistently called him out on it. So Ned Price ran out of B.S. The B.S. barrel was empty.”

“So what did Ned Price do then? Ned Price did what they all do when they are cornered. He went right to the lowest personal attack. He didn’t call Matt Lee racist – he’s probably saving that for next week – but he did suggest Matt Lee is more sympathetic to Russia than he is to his own country, the United States. He implied Matt Lee is a shill for Vladimir Putin.”