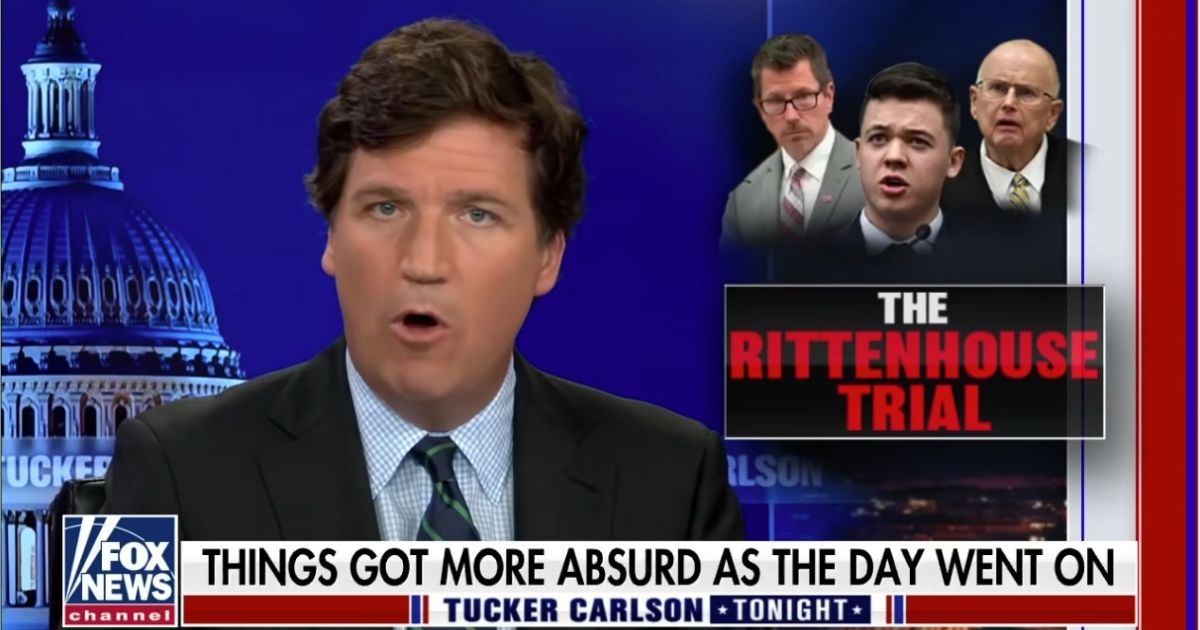 Kenosha County Assistant District Attorney Thomas Binger has made so many unforced errors during the Kyle Rittenhouse trial that we’ve lost track of them. From pointing a gun at the jury with his finger on the trigger to his declaration that an individual with a gun loses the right to claim self-defense, he has displayed his incompetence throughout the proceedings.

The establishment media seems more than willing to give Binger a pass for his multiple issues, but Fox News host Tucker Carlson hasn’t been letting him get away with it.

“If there’s one thing this trial has taught us, it’s how completely dishonest and totally misleading so many of the news accounts of what Kyle Rittenhouse did have been,” Carlson said on Monday’s show. “We’ve known for more than a year, for example, how Rittenhouse first encountered convicted child-rapist Joseph Rosenbaum, the first man he shot. There are multiple witnesses to that. Most of it’s on video, actually.”

Rosenbaum had just been released from what Carlson described as a “mental hospital” before joining the rioters in Kenosha, lighting a fire, wielding a chain as a weapon and threatening Rittenhouse. He then got close enough to Rittenhouse to grab for his rifle — and that’s why Binger showing the video to the jury may have been a big mistake.

“Binger tried to show that somehow Rosenbaum was not a threat to Kyle Rittenhouse,” Carlson said.

But he showed a video showing Rosenbaum to be very much an apparent threat to Rittenhouse.

“Here’s the defendant running in between those parked cars, slowing down and you can see just how close — or rather, how far away — Mr. Rosenbaum was when the defendant shot him,” Binger told the jury.

“Everyone whose eyes were open could actually see it because you just played the tape, Dumbo,” Carlson said. “Apparently, the prosecution is hoping the jury had its eyes closed for that part of the proceeding.”

The video is below, but note that Carlson misquotes Binger in both his comments and in the chyron: Binger did not say, “I mean,” as Carlson claimed, but “or rather,” which could indicate that he was making a rhetorical point rather than, as Carlson claims, a mistake.

Regardless, showing the video to the jury may turn out to have been a mistake either way, because it seems indeed to indicate that Rosenbaum was close enough to be a threat when Rittenhouse fired at him.

Judge for yourself whether Binger made one mistake or two when he showed the video in court:

Ironically, this might actually constitute the least egregious of the prosecution’s missteps in this case.

On Tuesday evening, shortly after the jury had been dismissed for the day, news broke that the defense had filed its second motion for mistrial with prejudice in the case on Monday, according to the Daily Mail.

The prosecutorial misconduct cited in the motion includes Binger’s introduction of a high-definition version of drone footage of the shootings for the first time during the jury instructions conference. Binger claimed that the new, clearer footage depicted the defendant “pointing his gun” at his victims.

Matt Gaetz: Rittenhouse Is Not Guilty, I May Offer Him Position as Congressional Intern

But evidence in the case closed on Saturday. This never-before-seen video should have been provided to the defense long before the trial had concluded.

The motion essentially argued that Binger introduced new evidence that was “at the center of their case” during the jury instructions conference, thus withholding evidence from the defense.

During his cross-examination of Rittenhouse, Binger also violated the spirit and intent of the defendant’s constitutional right to remain silent by intentionally bringing up Rittenhouse’s invocation of that right and presenting it as evidence of his guilt. Binger insinuated Rittenhouse had remained silent “so that he could ‘tailor’ his story to fit the facts as they emerged during trial,” the motion argued.

Should Kyle Rittenhouse be acquitted?

Additionally, Binger introduced evidence of a conversation Rittenhouse had with friends prior to the shooting during which he allegedly said he wanted to shoot shoplifters.

This hearsay evidence had previously been excluded by Judge Bruce Schroeder, and Binger’s mention of it led to to Schroeder’s memorable scolding of the assistant DA during the trial.

Although Binger claimed he had been acting “in good faith,” the judge responded, “Don’t get brazen with me.”

The third day of deliberations continues and a verdict could be reached at any time.

Elizabeth is a contract writer at The Western Journal. Her articles have appeared on many conservative websites including RedState, Newsmax, The Federalist, Bongino.com, HotAir, Australian National Review, Independent Journal Review, Instapundit, MSN and RealClearPolitics.
Please follow Elizabeth on Twitter.

Elizabeth is a contract writer at The Western Journal. Her articles have appeared on many conservative websites including RedState, Newsmax, The Federalist, Bongino.com, Australian National Review, HotAir, Independent Journal Review, Instapundit, MSN and RealClearPolitics.
Please follow Elizabeth on Twitter.