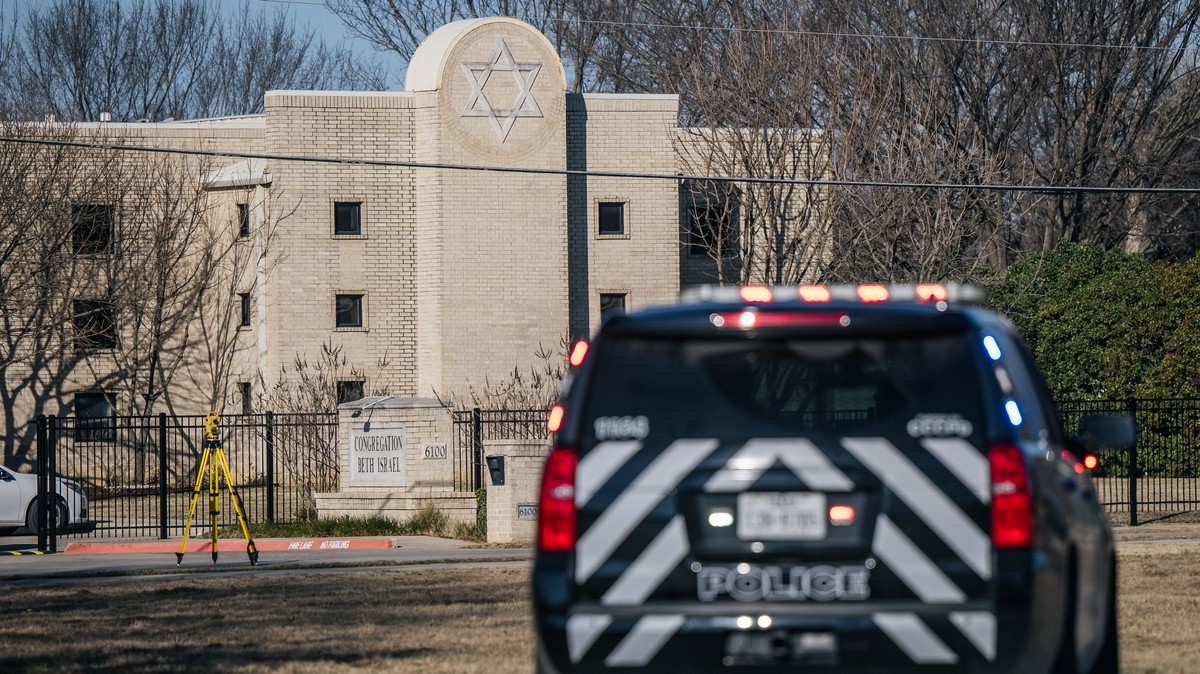 Two teenagers have been arrested in the northern English city of Manchester as part of an international counterterror investigation into a British Islamist taking hostages at a Texas synagogue on Saturday.

In a statement, Greater Manchester Police said that two teenagers – whose names, ages and gender were not given – had been arrested by counterterrorism officers in the south of the city on Sunday night. They are being held for questioning as part of the ongoing investigation into the attack at the Congregation Beth Israel synagogue in the Dallas suburb of Colleyville over the weekend.

The statement said British counterterror police were continuing to assist the investigation being led by US authorities. The arrests came after the FBI’s field office in Dallas had earlier said there was “no indication” that anyone else was involved in the attack.

During the attack, which US President Joe Biden labelled “an act of terror,” a single armed assailant took four people hostage, before being killed by an FBI Hostage Rescue Team around 11 hours after the standoff began. All four hostages, including Rabbi Charlie Cytron-Walker, survived the attack unharmed, according to local police.

The attacker, identified by the FBI as 44-year-old British national Malik Faisal Akram, was pronounced dead after the rescue team stormed the building. Crime scene investigators recovered a firearm they believe belonged to Akram, according to reports.

“Prayers answered. All hostages are out alive and safe,” Texas Gov. Greg Abbott tweeted about 20 minutes after a loud bang and gunshots were heard from the synagogue.

Cytron-Walker, the synagogue’s rabbi, told CBS News that he and the other hostages had escaped when he threw a chair at the gunman, then rushed for the door.

“When I saw an opportunity, when he wasn’t in a good position, I made sure the gentlemen were still with me, they were ready to go,” he said. “The exit wasn’t too far away, I told them to go.”

Footage of the dramatic end of the standoff was captured by Dallas TV station WFAA, which showed the hostages sprinting through the synagogue door, before Akram, holding a gun, opens the door seconds later, then disappears back inside as heavily-armed police approach the building.

One of the four hostages had previously been released after about six hours.

In a separate statement, Cytron-Walker credited security training he and his congregation had received over the years as enabling them to survive the attack.

“In the last hour of our hostage crisis, the gunman became increasingly belligerent and threatening,” he said. “Without the instruction we received, we would not have been prepared to act and flee when the situation presented itself.”

Akram, from the northern English city of Blackburn and known by his middle name, travelled to the US earlier this year to carry out the attack, according to reports. In a statement on Sunday, Biden said Akram had spent a night in a homeless shelter, and had acquired his gun “on the street.” Despite the attacker’s claims to have been carrying explosives, he had had no bomb.

Akram’s brother, Gulbar, issued a statement on behalf of the family on Sunday, confirming his brother’s death and condemning the attack.

“Any attack on any human being be it a Jew, Christian or Muslim etc is wrong and should always be condemned,” he said. He added that he had been in a police incident room in Blackburn during the standoff, communicating with his brother, negotiators and the FBI.

“Although my brother was suffering from mental health issues, we were confident that he would not harm the hostages,” he said.

“There was nothing we could have said to him or done that would have convinced him to surrender.”

Speaking to Sky News, he also questioned how his brother had been able to travel to the US to carry out the attack, given his criminal record in the UK. Akram’s prior criminal offending is unknown, but the Daily Mail reported that in 2001, Akram had had an Exclusion Order taken out against him banning him from Blackburn magistrates’ court for being threatening and abusive towards court staff. It quoted a letter from the court to Akram, stating that on September 12, 2001, “[i]n a clear reference to the terrorist attack on New York the previous day you said on more than one occasion to one of my court ushers ‘you should have been on the f***ing plane’.”

Saturday’s standoff began when Akram entered the synagogue as it was livestreaming a morning service, shouting that he had weapons and “backpacks of explosives” on him.

“If anyone tries to enter this building, I’m telling you…everyone will die,” he was heard saying, before the livestream was eventually cut.

Akram demanded the release of Aafia Siddiqui, 49, a US-educated Pakistani national known as “Lady Al Qaeda,” whose imprisonment has become a rallying cause for Islamists.

Siddiqui was sentenced to 86 years in prison by a US court in 2010 after being detained in Afghanistan with documents on developing biological and chemical weapons. With a PhD in neuroscience from Brandeis University in Massachusetts, Siddiqui is considered to have considerable expertise in developing such weapons, and was convicted of helping plan future terror attacks.

Images of Aafia Siddiqui issued by the FBI in 2003. Photo: FBI/Getty Images

During her interrogation by the FBI at the then-US base in Ghazni, Afghanistan, Siddiqui grabbed an M-4 assault rifle and non-fatally shot an FBI agent, before being shot herself and subdued by agents. Siddiqui was charged with attempted murder on top of terrorism charges based on her support for al Qaeda, and is serving her sentence in a Texas prison, not far from where Akram took the hostages.

Witnesses to the siege’s Facebook live stream said Akram demanded to speak with Siddiqui and said that he picked the location of the attack because it was the closest synagogue he could find to the prison where she is being held outside Fort Worth, Texas.

Married and living in the US with her then husband and three children, Siddiqui reportedly insisted on her family leaving the US for Afghanistan to help wage war against the American invasion sparked by the 9/11 attacks. Her online purchase of military style books and equipment brought her to the attention of the FBI, which questioned her and her husband, who divorced her in late 2002 because of her increasingly extreme activities. She then flew to Pakistan.

In 2003, Siddiqui was designated a key courier and adviser to al Qaeda operative and architect of the 9/11 attacks Khalid Sheikh Mohammed (KSM) and was the first and only woman to be listed on the FBI’s list of terror suspects post 9/11.

During this period, Siddiqui was considered by US intelligence and the FBI to be one of the seven most dangerous members of al Qaeda because of her scientific training, long time residence in the US and familiarity with international travel and US visa procedures.

“She had technical training in dangerous weapons, top contacts within KSM’s inner circle, the knowledge and ability to travel freely in the West,” said a retired US intelligence official, who tracked her from 2003 to 2008 and asked not to be identified because they work as a contractor for US intelligence in retirement. “Most of these guys are sort of clowns but she had a skill set that was known and feared at the highest levels of the US government during that period.”

She avoided arrest for five years before Afghan police detained her in 2008 and found USB drives and papers containing scientific documents on biological and chemical weapon manufacturing. After shooting the agent, she was extradited to the US and convicted on a slew of charges.

Her arrest and prison sentence made her a cause celebre in jihadist circles, with radical clerics from Pakistan to London to Iraq demanding jihadist supporters take action to free her.

In September 2020, the London-based extremist cleric Anjem Choudary – who was jailed in 2016 for inviting support of ISIS and has long been accused of inciting supporters to take violent action – told supporters on his Telegram channel that it was an obligation to work to free Siddiqui from prison.

“The obligation upon us is to either free her physically or to ransom her or to exchange her,” wrote Choudary. “However, until such time as we can fulfil these obligations, the minimum that we can do is to use all that we have to raise awareness about her case, to keep her name in the hearts and in the minds of Muslims.”

In a brief interview by encrypted messenger on Monday, Choudry told VICE World News that he did not know Akram and did not order the attack and referred to the September statement as evidence he’d only asked supporters to keep her case “in their hearts.”

A general view of the northern English city of Blackburn, where Malik Faisal Akram was from. Photo: Christopher Furlong/Getty Images

South Manchester, where the two teenagers were arrested on Sunday night, is home to a number of neighbourhoods which have long had an issue with Islamist extremism. Salman Ramadan Abedi, the Manchester Arena bomber, lived in Fallowfield, south Manchester, before killing 22 people in a suicide attack at an Ariana Grande concert in the city in 2017.

READ: The Manchester Arena bomber grew up in a neighbourhood struggling with extremism

Ismael Lea South is the director of a deradicalisation programme known as the Salam Project which works with young Muslims in south Manchester neighbourhoods. He told VICE World News that that while their had been a surge in commitment to anti-extremism initiatives within the local Muslim community following the 2017 attack, those efforts had lost momentum, especially since the collapse of the Islamic State “caliphate” and the start of the pandemic.

“The mosques, schools and youth clubs since 2020 have taken their feet off the gas,” he said.

He wasn’t surprised that Akram had demanded Siddiqui’s release during his attack. “Most people advocating for her release have been peaceful, but hate preachers and extremists like to jump on bandwagons to justify their foolishness,” he said.

The hostage-taking was the latest in a string of attacks on synagogues in the US, following the murder of 11 worshipers at the Tree of Life Synagogue in Pittsburgh in 2018, and an attack in Poway, California the following year in which one worshipper was killed and three injured.