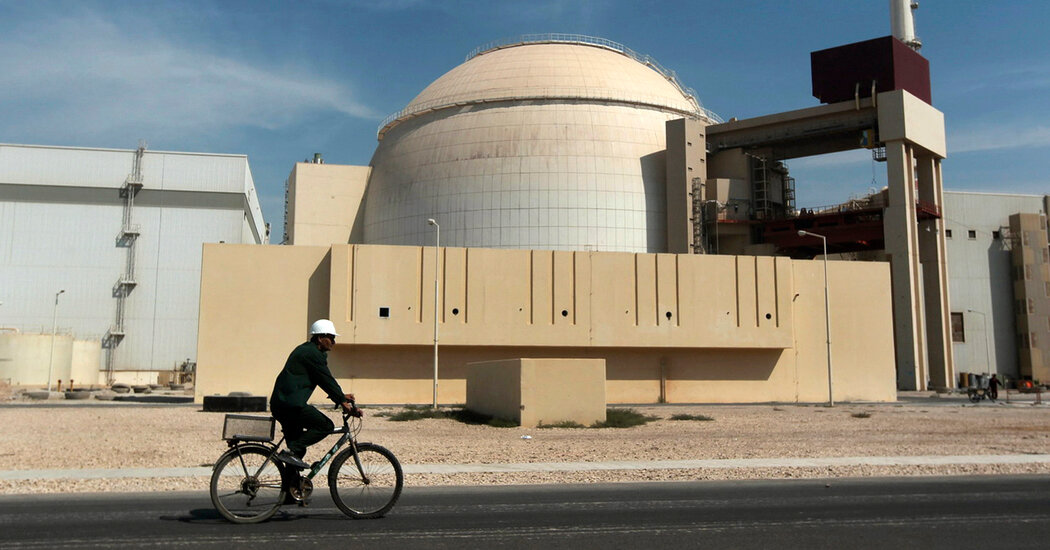 WASHINGTON — The United States and its European allies appear on the cusp of restoring the deal that limited Iran’s nuclear program, Biden administration officials said on Monday, but cautioned that it is now up to the new government in Tehran to decide whether, after months of negotiations, it is willing to dismantle much of its nuclear production equipment in return for sanctions relief.

Speaking to reporters in Washington, a senior State Department official signaled that negotiations had reached a point where political leaders needed to decide whether they would agree to key elements of an accord that would essentially return to the 2015 deal that President Donald J. Trump discarded four years ago, over the objections of many of his key advisers. Ultimately, that freed Iran to resume its nuclear production, in some cases enriching nuclear fuel to levels far closer to what is needed to make nuclear weapons.

Administration officials cautioned that it was not clear whether a final agreement would be struck, and in Iran that decision is bound to go to the supreme leader, Ayatollah Ali Khamenei. And while some remain deeply skeptical that Iran would ultimately agree to the terms now being discussed, the State Department official said that “we can see a path to a deal if those decisions are made and if they are made quickly.”

“Now is the time for Iran to decide whether it’s prepared to make those decisions,” the official said. A second senior administration official also said the talks had reached the decision-making stage. Both officials spoke on the condition of anonymity because of the sensitivity of the negotiations.

For President Biden, restoring the deal — and with it, limits on Iran’s production capability — would fulfill a major campaign promise and seal a breach Mr. Trump created with Britain, France, Germany and the European Union, which participated in the original agreement along with Russia and China. But it also comes with significant political risks.

No Republican voted for the deal in 2015, and its restoration would almost certainly become a campaign issue in the midterm elections. Like the original deal, the new one would not limit Iran’s missile development, the senior official said. It also would not halt Tehran’s support for terrorist groups or its proxy forces, which have stirred unrest across the Middle East, as some Democrats and nearly all Republicans have demanded.

Despite those shortcomings, Mr. Biden is prepared to return to the 2015 agreement and “to make the political decisions necessary to achieve that goal,” the senior State Department official said.

And while American officials offered no details, a clean restoration of the old accord would mean all limits on Iran’s production of nuclear material would still expire in 2030. Last year, Secretary of State Antony J. Blinken vowed that after restoring the old accord, the United States would seek one that was “longer and stronger.” But Iranian officials rejected that idea.

The State Department official said that the negotiations to restore the 2015 agreement were “in a final stretch” and that “all sides” needed to commit to returning to full compliance. In fact, the United States violated the original accord first, when it withdrew and reimposed sanctions against Iran. Mr. Trump then added hundreds of additional sanctions, and it is unclear how the negotiation now underway would deal with those.

In Iran, Ali Akbar Salehi, the former head of the country’s Atomic Energy Organization and a key player in the original negotiations, told an energy conference that “it appears that the nuclear negotiations will reach the end result that we have in mind,’’ according to Iranian news reports.

After nearly two years of trying to persuade European leaders to counter the American sanctions, Iran began violating the agreement, denying inspectors access to key facilities and ramping up its nuclear enrichment.

While it has not amassed the same volume of enriched uranium as it held before the 2015 agreement, it has purified some of its new stockpile to a level of 60 percent — closer to the 90 percent enrichment used to produce nuclear weapons. Previously, Iran had capped its enrichment at 20 percent.

“A country enriching at 60 percent is a very serious thing,” Rafael Grossi, the director general of the International Atomic Energy Agency, the United Nations body that inspects Iran’s production facilities and verifies compliance with agreements. “Only countries making bombs are reaching this level.”

Iran had been resistant to eliminating that 60 percent-enriched fuel. It is unclear how it would be disposed of, or whether it would just be moved to another country, perhaps Russia, which took Iran’s previous stockpile.

When Mr. Trump exited the original agreement in 2018 — which he called “the worst deal ever” — he promised to force Tehran into new negotiations, saying he would get better terms and also halt the country’s support for the Syrian regime, its funding of terrorist groups and its missile tests. But he never got them back to the negotiating table.

Instead, Iran doubled down on its nuclear and military activities in the region, and evaded sanctions by smuggling oil to key buyers — including China — to keep its economy afloat as it waited for the Trump administration to leave office.

The new government of President Ebrahim Raisi was dismissive of its predecessors, charging that they had failed to get sanctions lifted even after Iran shipped 97 percent of its nuclear fuel out of the country. And for months it left American negotiators — whom it has refused to meet directly — dangling, uncertain whether the new leadership would even attempt to reconstitute the old arrangement. Over time, though, economic pressures on Iran built.

The 2015 deal. Iran and a group of six nations led by the U.S. reached a historic accord in 2015 to significantly limit Tehran’s nuclear ability for more than a decade in return for lifting sanctions. The agreement was President Barack Obama’s signature foreign policy achievement.

A path back to an accord. President Biden vowed to bring the U.S. back into the deal, and talks in Vienna created a road map for that effort, though challenges have remained: Iran wants the U.S. to lift sanctions first, while the U.S. wants Iran to return to compliance first.

What happens next. Both sides have softened their demands, but American and Iranian officials have admitted that major points still need to be addressed. While the impetus for renewing the 2015 treaty appears to be strong, neither side wants to seem too eager to reach a deal.

Mr. Biden’s biggest political vulnerability now may be that in restoring the old arrangement, he buys an eight-year reprieve at best.

“You arrest the advance of the of the program; you buy time to deal with what is a problem that is being deferred,” said Dennis B. Ross, a longtime Middle East negotiator who oversaw Iran policy at the White House during the Obama administration. “It’s not going away — it’s being deferred.”

However, Mr. Ross said, the deal helps stave off a nuclear arms race in the region.

One key issue is how Israel will respond. It has continued its sabotage campaign against Iran’s facilities, blowing up some of them and, at the end of the Trump administration, assassinating the scientist who led what American and Israeli intelligence believe was Iran’s bomb-design project. But no intelligence agency has provided public evidence that the project has resumed in a significant way since it was suspended in 2003.

The U.S. and Iran also appear to be close to reaching a prisoner swap deal to free four American citizens in exchange for Iranians sentenced for sanctions violations, according to two people familiar with the talks. The senior State Department official said that he could not envision a deal with Iran if Americans were not released, and Iran’s foreign ministry subsequently said it would be open to a prisoner exchange with the U.S.

On Monday, ardent critics of the 2015 deal — and by extension the return to it — vowed to overturn it when a Republican president returns to the White House.

“Any nuclear deal will allow Iran to take patient pathways to nuclear weapons as key restrictions expire and tens of billions of dollars flow into the coffers of the regime to finance its destructive activities,” said Mark Dubowitz, the chief executive of the Foundation for Defense of Democracies, a Washington think tank, who worked with several administrations on Iran policy.

“When power shifts in Washington, Republicans again will reimpose all the sanctions and take America out of what they see as a fatally flawed agreement,” he said.