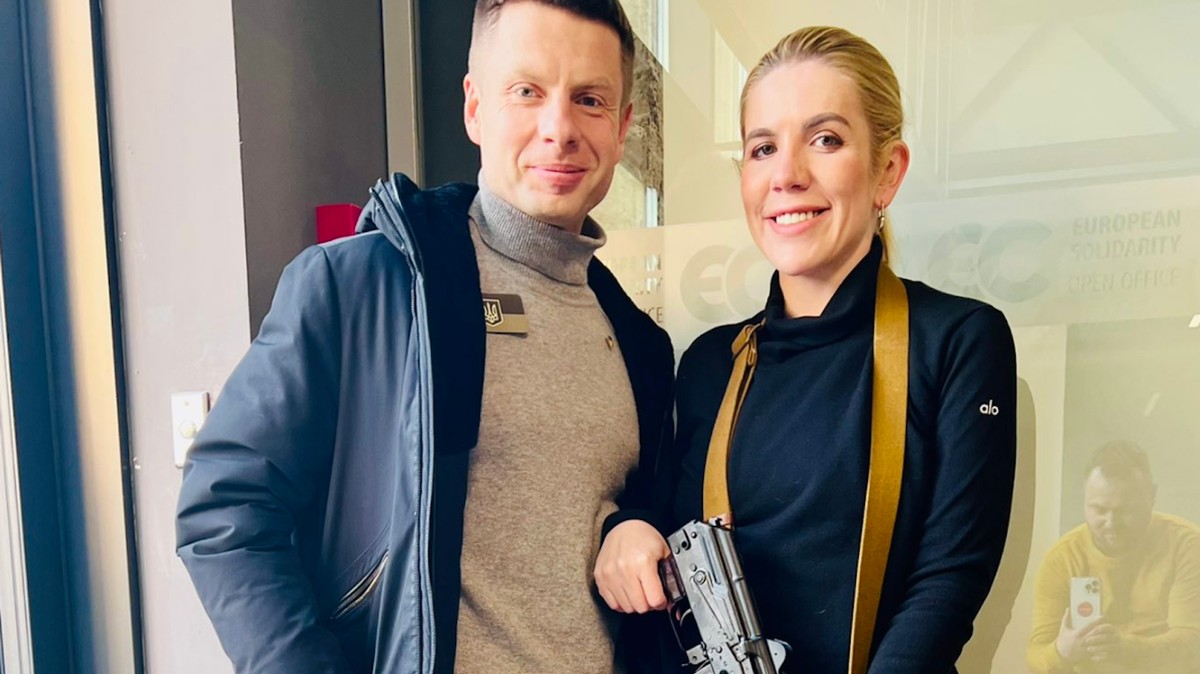 Oleksiy Goncharenko is a Ukrainian member of parliament. He’s also, like thousands of Ukrainians, a reluctant makeshift soldier. In a live appearance with Indian outlet India Ahead News, Goncharenko said he was prepared to kill Russian occupiers with a rifle he brandished during the appearance.

“A former Ukraine president [Petro Poroshenko], he took up the rifle as well, he was on record and when asked ‘How long will you hold the Russian forces out,’ he says ‘forever.’ Do we have more senators, more members of the parliament who has taken up arms defending?,” the India Ahead News host asked Goncharenko.

Goncharenko pulled up a rifle for the camera and said, “That’s my arm, I’m ready and I’m prepared to meet Russian occupants. And not only me, now, for example, I’m in a premise where four MPs [members of parliament] are, and all of them are with weapons in their hands.”

Various politicians have been showing on social media and in news interviews that they are armed and ready to fight. Lavrov earlier posed with fellow MP Kira Rudik, who was wearing running shoes, Alo yoga pants and jacket, and an AK-47. Rudik, who is a former surveillance tech executive (she was the Ukraine CEO of Amazon’s Ring), also did an interview with India Ahead News, in which she immediately showed her AK “yeah, I have my gun with me.”

The news appearances and social media posts show just how quickly Ukrainian politicians have gone from dealing with normal order to becoming makeshift soldiers of necessity in a fight for their country.

“I spent last two days in trainings and I hope that I’ll have two or three days more before I’ll have to fire it,” she added. She showed off the gun to BBC Newsnight and made several tweets about the gun.

Earlier in the day, Poroshenko, who was president between 2014 and 2019, spoke to CNN while holding a rifle on a street surrounded by a few Ukrainian soldiers. “This is the Shot Kalashynkov,” he said, gesturing to the men behind him. “We have maybe four, and we have two machine guns, and, more or less that’s it. We don’t have artilleries, we don’t have tanks, we don’t have an armed personnel carrier because we launched this process just a couple days ago.”’

Average Ukrainians have been armed as Russia tries to take Kyiv and other cities around the country. Current President Volodomyr Zelenskyy has been calling on all able Ukrainians to fight and authorities have been giving out guns to anyone who will take them and said “I need ammo, not a ride” when reportedly asked if he wanted an evacuation by the US government. The government is also asking people to make molotov cocktails.

This was not Goncharenko’s only memorable interaction with media Saturday. Later in the day, an ABC reporter asked Goncharenko what he thought of a proposal by Russian foreign minister Sergei Lavrov to resume diplomatic negotiations after Russia “restores democratic order” in Ukraine.