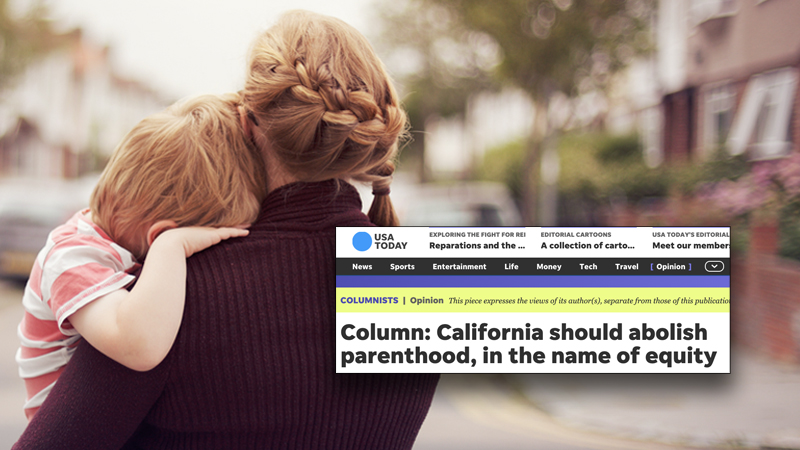 A recent column in USA Today calls for the state of California to “abolish parenthood”, putting the government in charge of childrearing statewide in the name of “equity.”

In the op-ed titled, “California should abolish parenthood in the name of equity“, Zócalo Public Square editor Joe Mathews argued that for the state to enshrine “equity” as its “highest value”, parents should be stripped of their “power” over their children.

“Fathers and mothers with greater wealth and education are more likely to transfer these advantages to their children, compounding privilege over generations,” Mathews wrote in the column published Thursday.

“As a result, children of less advantaged parents face an uphill struggle, social mobility has stalled, and democracy has been corrupted. More Californians are abandoning the dream; a recent Public Policy Institute of California poll found declining belief in the notion that you can get ahead through hard work.”

“My solution — making raising your own children illegal — is simple, and while we wait for the legislation to pass, we can act now: the rich and poor should trade kids, and homeowners might swap children with their homeless neighbors.”

Mathews even admitted that his radical proposal is “totalitarian”, but as with all leftist doctrine, the ends justify the means.

“Now, I recognize that some naysayers will dismiss such a policy as ghastly, even totalitarian. But my proposal is quite modest, a fusion of traditional philosophy and today’s most common political obsessions,” he wrote.

Mathews goes on to claim that the political left and the right could unite behind this crazy proposal: without parents, the left would be able to indoctrinate children with critical race theory, and conservatives would get to pursue their “great passion”, which he claims is to “take immigrant children from their parents.”

The left’s introduction of anti-racism and gender identity in schools faces a bitter backlash from parents. Ending parenthood would end the backlash, helping dismantle white supremacy and outdated gender norms. Democrats also would have the opportunity to build a new pillar of the safety net — a child-raising system called “Foster Care for All.”

Over on the right, Republicans are happy to jettison parents’ rights in pursuit of their greatest passions, like violating migrant rights. Once you’ve gone so far as to take immigrant children from their parents and put them in border concentration camps, it’s a short walk to separating all Americans from their progeny.

This is the left’s endgame: take away parental rights and imbue the state with the full authority to control our children.