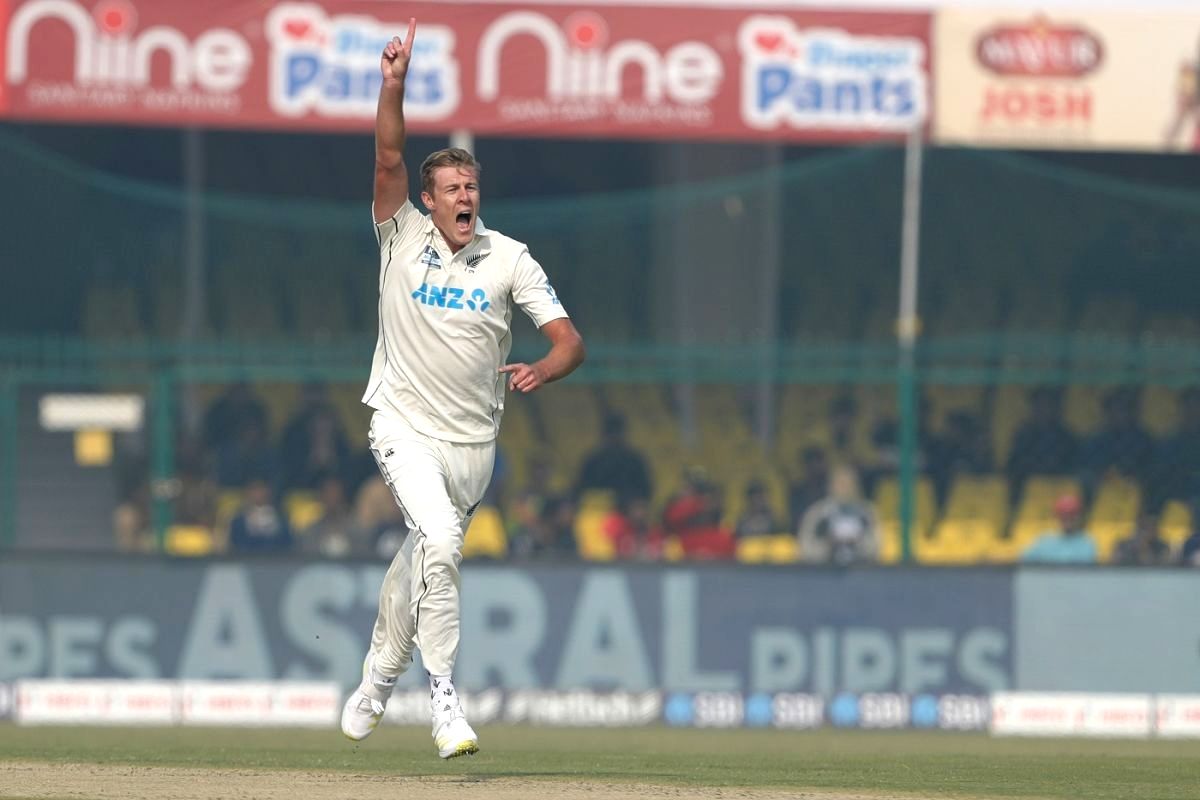 Mumbai, Dec 2 : New Zealand pacer Kyle Jamieson said on Thursday that it was “very cool” for the tourists to finish the first Test against India at Kanpur with a thrilling draw.

He added that he hopes that rain doesn’t play spoilsport ahead of the second Test at the Wankhede Stadium from Friday. The two-match series is now locked at 0-0 with both India and New Zealand having a chance of winning the series.

“It was an awesome Test. Pretty nail-biting going down to the last wicket in the dying minutes of daylight we had. Very cool to come out with a draw like that. In Test cricket, we see a lot of victories within day three or four but to go down till the end on day five and have a thrilling draw at the end was pretty cool,” said Jamieson in a video interview by New Zealand Cricket (NZC).

Jamieson also reflected on his experience of playing his first Test in Indian conditions. “I hadn’t played anything in this part of the world, especially red-ball cricket. So, trying to learn and see how my game will go in these conditions. I think that’s the beauty of Test cricket, it challenges you to play yourself all around the world. I have had limited experiences overseas and certainly hope through the course of my career that challenges like that. Those are the sort of things that make you drive and strive to get better and take on these challenges and learn from them.”
The 26-year-old, who became the fastest New Zealand pacer to reach fifty Test wickets, was aware of rainy weather possibly playing a part in the second Test. “It’s a pretty cool stadium and obviously an iconic venue in India. To be here for the second Test, with all three results possible, it’s awesome to be here. There has been a little bit of rain here, which I have seen for the first time in three months. Actually, been a nice change but hopefully the weather stays away for the next five days and can push hard for a Test series win.”
New Zealand go into the second Test without any outdoor or indoor practice. Jamieson doesn’t think that lack of practice will be a cause of concern for the team. “I guess it’s certainly different. But not a huge amount. The guys have been away from home for a fair check of time. It’s quite nice to have the next couple of days to refresh physically and mentally as well. While it would have been nice to have a little bit of bowl, I guess it’s not too major having the volume of cricket we had.”
Jamieson signed off by heaping praise on his senior pace-mate Tim Southee, who took 5/69 and 3/75 in both innings at Kanpur despite a right groin niggle. “It’s awesome. To bowl alongside Tim in a two-pronged attack was pretty special in foreign conditions, something we are not used to at home. Just to watch him operate was pretty special despite the niggle he had and to go about his business through the workload he did was something which I kind of sat back and admired. Anytime I get a chance to play alongside these guys is certainly a pinch myself moment I just love to be a part of.”