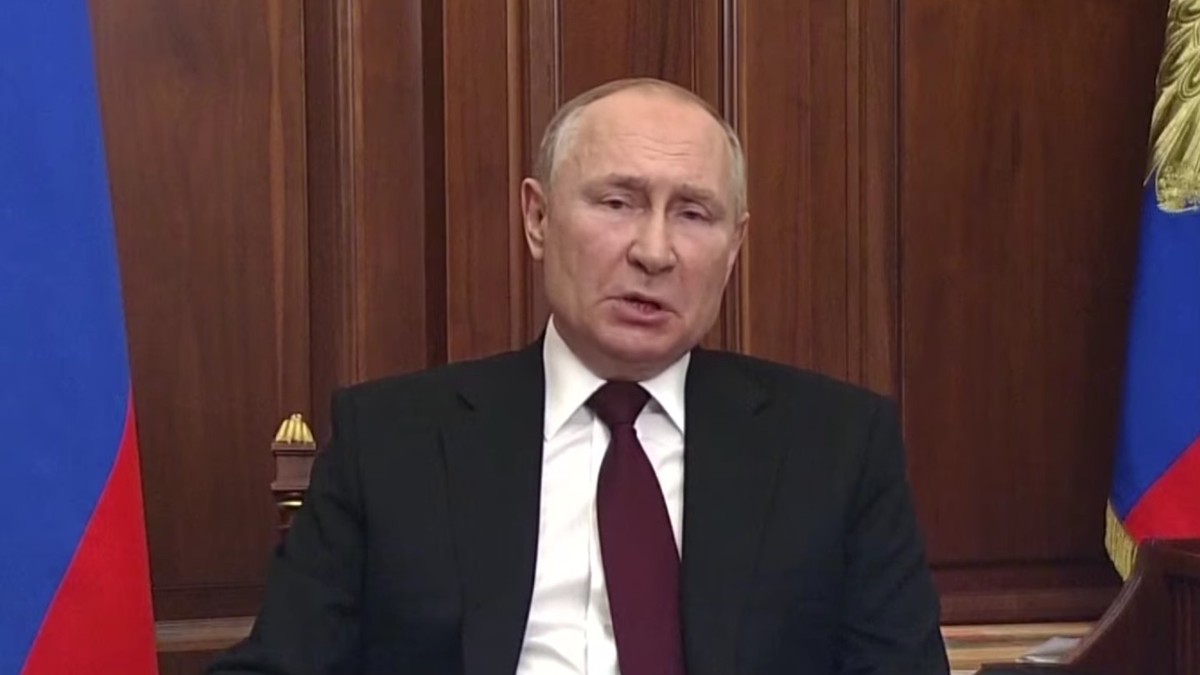 Vladimir Putin speaks from the Kremlin in a televised address on Russian TV. Photo: YouTube

Vladimir Putin will recognise the independence of two breakaway regions in eastern Ukraine held by Russian-backed separatists, the Kremlin has said, in what marks a huge escalation of the Ukraine-Russia crisis.

The decision was confirmed in a statement from the Kremlin and came after a bizarre meeting of Putin’s Security Council in Moscow. Putin is currently giving a lengthy and meandering address on Russian TV where he is expected to announce the move.

Putin began the address by saying that modern Ukraine was created by Russia, and accused the country of seeking to develop nuclear weapons, despite Ukraine giving up its nukes 30 years ago in return for guarantees of security from Russia itself.

The decision to recognise the separatist-controlled areas of Eastern Ukraine comes after months of growing tensions as more than 100,000 Russian troops amassed on Ukraine’s borders and the West warned of an imminent invasion.

Fighting between Russian backed separatists in Luhansk and Donetsk and the Ukrainian armed forces has simmered since 2014, when both areas left Ukraine as Russia forcibly annexed Crimea.

Recognition of the two republics at the same time as Russia makes widespread but completely unsubstantiated allegations of war crimes against their populations is widely seen as a potential escalation towards all-out war.

Putin’s statement on Monday night came after a meeting of his top security advisers, which unusually for a top secret Security Council meeting was shown on Russian TV. During the meeting Putin heard from a series of advisers and officials about the situation in Ukraine.

In increasingly surreal scenes against, Putin interrupted stumbling advisers, chided them for speaking out of turn, and heard warnings that Ukraine could build a nuclear weapon faster than Iran, and had committed genocide against the Russian-speaking populations in Luhansk and Donetsk.

Although the event was portrayed as live, Russian defence minister Sergey Shoygu’s watch appeared to give the game away.

More than 14,000 people have died since 2014 in a conflict between Ukraine’s armed forces and Russian-backed separatists in Eastern Ukraine. US officials say that Russia has moved up to 190,000 troops fully backed by logistics and air support on the border with Ukraine, and is planning what President Joe Biden says could be a major military operation in the coming days.

Amid these warnings,Russian state media and government officials have claimed that Ukraine’s armed forces have targeted border posts. Yesterday Russian evacuated civilians from much of the border area. Monday’s unscheduled meeting of the security council could be seen as a final step to a military operation to annex or recognise the breakaway areas.

Former Russian President and deputy chair of the council Dmitry Medvedev told Putin that recognition of the breakaway republics was appropriate and that while it might cause an incident such as in 2008 – when thousands of Russian troops invaded Georgia to support South Ossetian independence – that the costs would be worth it.