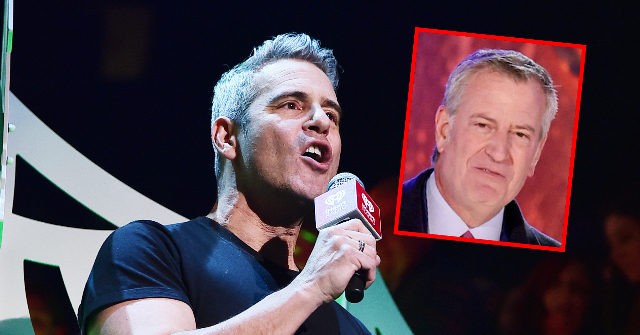 Watch What Happens Live host Andy Cohen slammed former New York City Mayor Bill de Blasio during CNN’s New Year’s Eve Live coverage on Friday night, proclaiming, “The only thing that Democrats and Republicans can agree on is what a horrible mayor he has been.”

“Watching Mayor de Blasio do his victory lap dance after four years of the crappiest term as the Mayor of the New York,” Cohen began (de Blasio, however, actually served eight years as Mayor of New York).

As Andy Cohen continued airing his grievances to the camera, his co-host, Anderson Cooper, begged him not to “go on a rant,” and asked “this is how you want to start the new year?”

But Cohen ignored Cooper, and proclaimed to the audience, “The only thing that Democrats and Republicans can agree on is what a horrible mayor he has been. So, sayonara, sucker!”

good god this man is full of rage pic.twitter.com/SaNgNgwLY5

The TV host went on to say, “2022, it’s a new year, ’cause guess what, I have a feeling I’m going to be standing right here next year, and you know what I’m not going to be looking at? Dancing as the city comes apart.”

After the ball dropped, de Blasio was replaced by Mayor Eric Adams as mayor of New York.

Last year, de Blasio danced with his wife in Times Square before midnight on New Year’s Eve while keeping the rest of New York out of the famed plaza for the first time history as he enforced coronavirus restrictions.
Cohen aired his frustrations with de Blasio then, as well, stating, “I just don’t need to see [Mayor de Blasio dancing] at the beginning of 2021.”

“Do something with this city!” Cohen exclaimed. “Honestly, get it together!”

LOL Andy Cohen was channeling the frustrations of every single New Yorker this year. GET IT TOGETHER MAYOR DEBLASIO! pic.twitter.com/g3ZUjW4MJo