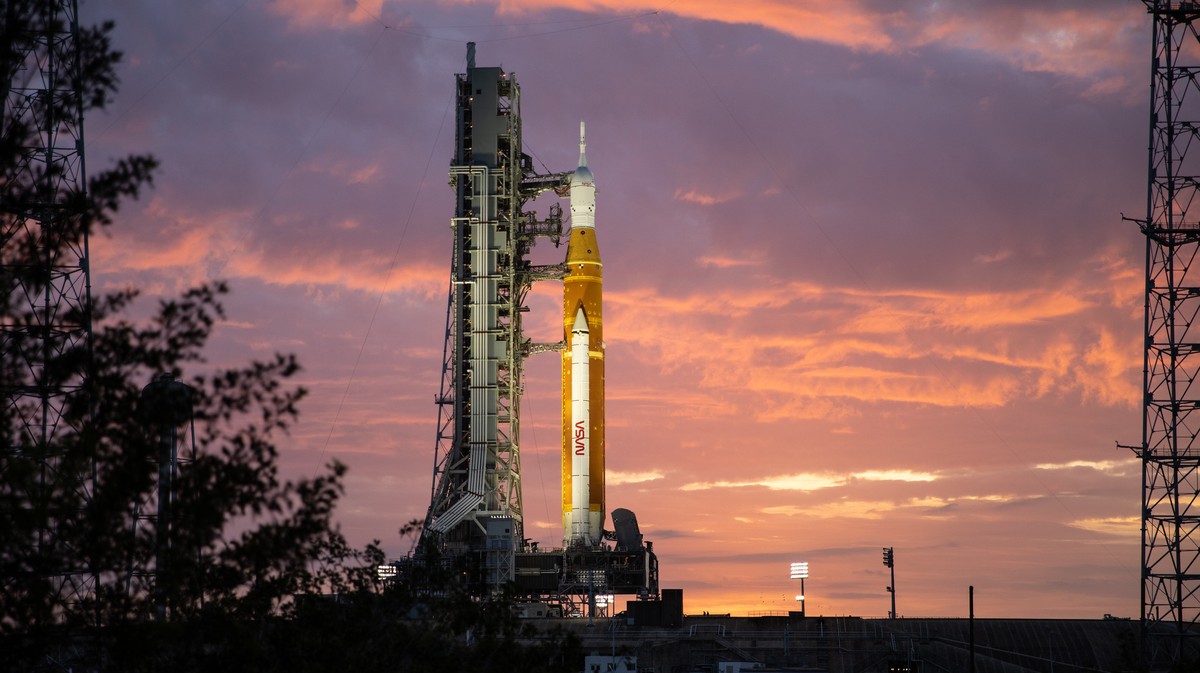 Artemis I on the launchpad. Image: NASA

After years of delays, NASA is finally gearing up to launch the most powerful rocket in history, a behemoth known as the Space Launch System (SLS), for the first time on Monday, which will mark a major milestone toward the agency’s vision of returning humans to the Moon as part of its Artemis program.

The maiden flight of the SLS, which will not carry astronauts, is currently scheduled to blast off some time between 8:33am and 10:33am ET on Monday, August 29 from NASA’s Kennedy Space Center in Cape Canaveral, Florida. Coverage of the mission, called Artemis I, will be livestreamed at the link below starting at midnight on Monday. If the launch is scuttled or delayed for any reason, it will be rescheduled for either September 2 or September 5.

Once it reaches space, the SLS will hoist NASA’s new crew module Orion, which can carry six people, on a path to the Moon, where it will conduct a test flight in a distant lunar orbit, before returning to splashdown on Earth on October 1. The capsule will be accompanied on its journey by 10 small satellites, known as CubeSats, that will perform experiments and technical demonstrations, and will remain in space.

NASA hopes that Orion will carry humans to the Moon for the first time since the Apollo era 50 years ago, when six different crews walked on the lunar surface. The next mission in the series, Artemis II, will be the first to carry humans and is currently slated to launch in May 2024. Artemis III, scheduled for 2025, aims to land two people, including a woman, on the Moon’s surface with the Starship Human Landing System, a vehicle that is being developed by the private space company SpaceX.

The Artemis program is designed to build on the Apollo program by enabling longer-duration human visits to the lunar surface, which may eventually last weeks or months. Artemis I will also test-drive a new path in space that will bring it within 60 miles of the lunar surface during its closest approach on the sixth day after launch. It will then swing out to more than 40,000 miles beyond the Moon, much farther than any crewed spacecraft has traveled before.

These parameters are designed to allow future missions carrying astronauts to land on the south pole of the Moon, where water ice exists in permanently shadowed craters. Though no astronauts will land on this mission, Artemis I does carry a mannequin called Captain Moonikin Campos, named after Arturo Campos, an engineer who was central to the successful return of Apollo 13 after the mission suffered an infamous explosion.

The Captain will be seated next to Helga and Zohar, two mannequin torsos that simulate female astronauts, as well as a Snoopy plush doll and a Shaun the Sheep toy, which respectively represent the American and European contributions to the Artemis program. May they all return to Earth safely.