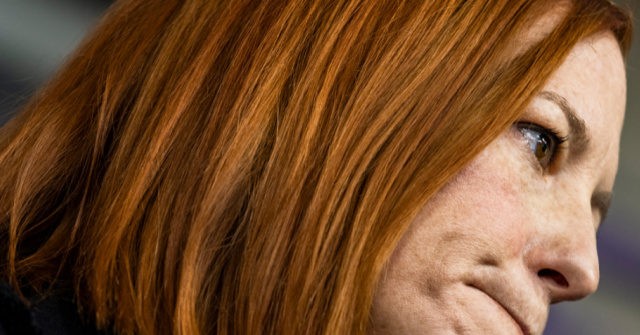 Protect the Public’s Trust (PPT), a federal ethics watchdog group, has requested an investigation into White House press secretary Jen Psaki over possible ethics violations regarding her negotiations with establishment media outlets while she remains in the administration giving regular briefs.

PPT explained that Psaki’s statements and actions in the recent weeks during the widespread reporting that she has been in negotiations take a role with an establishment media outlets and leave her federal service. The watchdog noted that Psaki even appears to be out of line with her own promise to set “an example of engagement and transparency.”

“Despite the reporting and recusal requirements federal employees must comply with while in negotiations for outside employment as well as her own statements regarding those obligations,” the watchdog explained, “Psaki does not appear to have altered her behavior with respect to either her prospective employer or its competitors.”

In fact, throughout the widely reported process, PPT noted that she has continued to give regular briefings to reporters that work at the establishment media outlets she has reportedly been in talks with. Axios reported early this month that Psaki is  in “exclusive talks with MSNBC to join the network after she leaves the White House around May.”

The letter requesting an investigation also lays out comments made by Psaki on April 14 during a recording of Pod Save America, where she disparaged Fox News and one of its employees. Fox News is a competitor of her reported prospective employer, which could allude to her misusing her official position.

PPT noted that Psaki was introduced by her official title of White House press secretary during the podcast, where she also answered questions that related to President Joe Biden and her official duties. However, at one point during the recording was asked about Fox News White House correspondent Peter Doocy.

“He works for a network that provides people with questions that, nothing personal to any individual including Peter Doocy, but might make anyone sound like a stupid son of a b***h,” she declared.

“These actions could create a potential conflict of interest or the perception of a possible conflict of interest in the eyes of the American public,” PPT noted, which is why they are requesting an investigation into whether she misused her position to create an appearance of impartiality.

The appearance of a conflict of interest risks further damaging the already low level of public trust in government. In order to restore public trust and live up to Ms. Psaki’s own commitment to transparency and engagement, we are calling upon you to investigate whether Ms. Psaki violated her ethical duties, either in her remarks regarding Fox News or in her conduct while negotiating non-federal employment more generally.

In addition, we are calling upon you to release ethics records relating to Ms. Psaki’s quest to find a new employer including, but not limited to, records of any formal recusals, Stop Trading on Congressional Knowledge Act of 2012 (STOCK Act) notifications, and records of advice the White House Counsel’s Office has provided to Ms. Psaki to aid compliance during her job search.

These types of records, particularly records of formal recusals, Stock Act notifications, and final guidance, are frequently released by federal agencies under the Freedom of Information Act (FOIA). While the White House Office is generally not subject to FOIA, we believe that the least the White House can do to help bring “truth and transparency back” is to hold itself to the same standards as the rest of the federal government.

Michael Chamberlain, Director of Protect the Public’s Trust, stated that the press secretary “on multiple occasions has touted the Biden Administration’s commitment to not just meet the minimum requirements with respect to ethics and transparency but to exceed the achievements of every one of its predecessors”

“Her pursuit of outside employment presents the perfect opportunity for her and the administration to demonstrate that commitment and take a step toward restoring the American public’s trust in its government,” Chamberlain added. “They don’t appear to be off to a great start in that regard but complying with our requests would represent a move in the right direction.”

A copy of the full letter can be found here.