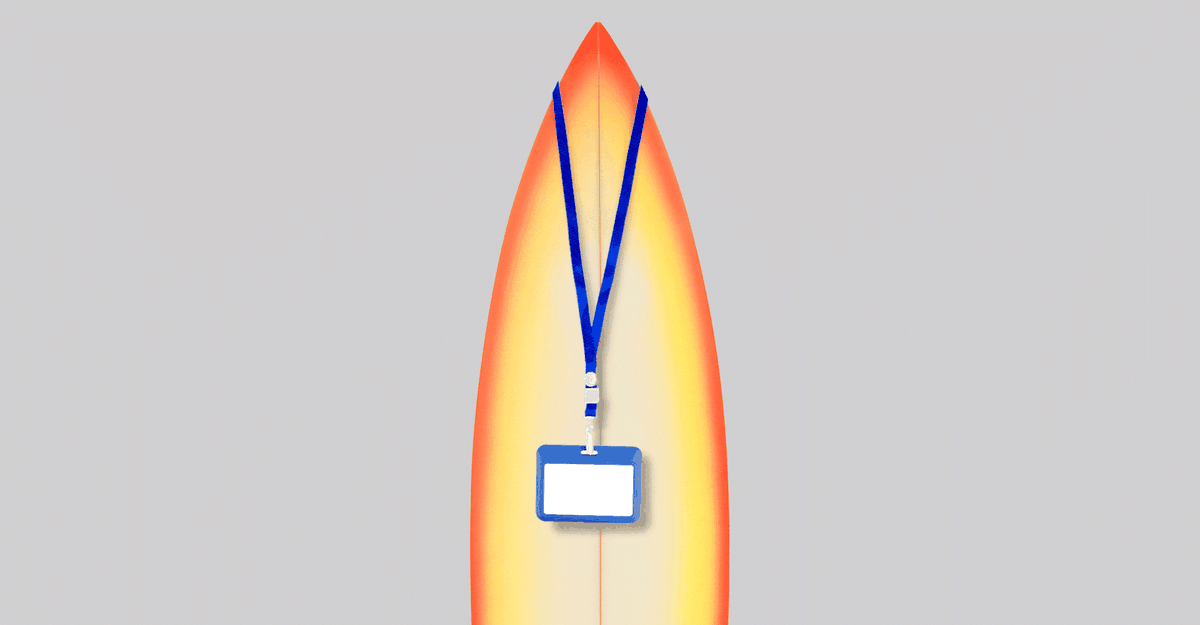 When I felt the wave lift my board and push it forward, I knew exactly what to do. I stood up, turned left, and put my weight forward to shred the surf. If this were San Diego, where I’d just been surfing, I’d see the sun rise over the beach. Instead I saw two gated hot tubs, a row of private cabanas ($370 for the day), and a photo booth selling pics for $15 a piece.

This is Urbnsurf, an artificial wave lagoon roughly 10 minutes from Melbourne Airport. It looks out onto an office park and has a similarly corporate energy: wristbands, liability waivers, mandatory safety briefings, and, if you just want to go and watch, a $5 spectator’s fee.

When I’d first heard about Urbnsurf, it sounded corny, like a wave pool at SeaWorld. I’m used to ocean surfing and all of its jellyfish stings, barnacle cuts, and unseen riptides. But by March, I’d been starved of a good wave: In Sydney, where I was staying with my brother at the time, nonstop rain had made the ocean feel like it was predominantly sewage, and the city had just seen its first fatal shark attack in 60 years. So my brother and I decided to go for it.

During the hour-long session, I caught about 10 waves, and each was more or less identical; they always broke in the same place and in the same direction and never closed out on top of me. It was surfing, but optimized and run like an assembly line. And here’s the thing: It was so, so sick.

I’m not the only one who thinks so. Though artificial wave pools have been around since at least the late ’60s, they’ve exploded in popularity over the past few years as the technology has become more advanced. Parks like Urbnsurf have opened across the United States, and in countries including Brazil, Germany, Wales, Spain, and New Zealand. Urbnsurf is building another lagoon in Sydney, scheduled to open next year. But purists haven’t loved the trend. “Surf Ranch is a satanic mirror!” the surfing journalist Chas Smith wrote in reference to a park in California built by the surfing legend Kelly Slater. “It shows you who and what you are but the worst possible version.” And now, with artificial pools reaching a wider and wider audience, a sport that’s notoriously macho, unfriendly, and intimidating is accessible like never before. Naturally, surfing culture as we know it is starting to change, too.

Before going surfing, I’m used to lugging my board onto a bus. I’m not used to booking a session online. Using the descriptions, we debated which level was right for us. Could we “paddle, take-off, trim along the wave face, and safely dismount?” Yeah, of course. Well … maybe. We’re both consistent surfers, but it depends on the board, the wave, the day. To cover all our bases, we signed up for the two easiest levels. Still, three weeks out, all we could book were left-breaking waves, which are supposed to be harder if, like us, you surf with your right foot back.

When we got to Urbnsurf, it looked like we’d just boarded a Royal Caribbean Cruise. Where was the weed-smoking, the dogs with sunglasses, the sleeper vans with Instagram handles painted on the back?

The only familiar sights were the men in identical black wetsuits with skin fades and tiny, four-foot-long boards that are easier to turn but much harder to stand up on. Out on the ocean, they yell at you if you’re within 15 feet of their wave. But there were also more women, more families, and more kids, especially girls, than I’d ever seen in one place. At the rental shop, the man working the front desk had his nails painted, like me. I’d never seen that while surfing, either.

After we got our boards—embarrassing bright-blue, 7-foot-6 foamies—we caught the tail end of the safety briefing. Finally, we could surf—well, “surf.” After scanning our wristbands at the turnstile, we paddled out in the chlorinated water toward the massive metal cylinder capable of spitting out all types of waves, from a slow, gentle roller to a six-foot-high barrel. One by one, we’d maneuver out to the label on the concrete wall that corresponded to the difficulty level of our wave and wait for our turn. For most of the four years I’ve surfed, I’d see a promising wave, turn toward the shore, and paddle furiously until I either caught it or didn’t. But recently, I’d learned to look back at the wave as I prepared to drop in, to read the shape and color to figure out where and when it would break. At Urbnsurf, I didn’t have to do all of that: I already knew I was in the right position. As soon as I heard the whurl of the machine, I’d start kicking my legs uselessly up and down.

Riding essentially the same wave over and over again is nothing like surfing the ocean, but it’s an amazing way to practice. For the first time in my life, I was able to trace along the face of the wave, turning down to gain speed and turning up to build momentum, all without being afraid that the wave would suddenly topple over and roll me so many times, I wouldn’t know which way was up.

After our first session, we moved up a difficulty level. While I waited my turn, I saw nearly every person before me bury the nose of their board and face-plant into the water. Even in a single session you could see a huge spectrum of ability, from an overconfident beginner who left halfway through to a woman who absolutely shredded on a little potato chip of a fiberglass board. On my first attempt, I managed to stand up and ride for a few glorious and exhilarating seconds, but when I jumped off there was no familiar tug on my right leg.

Oh my God, I thought. What happened to my leash? In San Diego, my friends surfed so well that they hardly used a leash at all, because they rarely fell off their boards. I imagined them seeing me now, bobbing up and down in sight of a restaurant featuring “craft breweries and artisan producers.” I did a sad little breaststroke toward the private cabanas, where a lifeguard helped me reattach my leash to the board.

Urbnsurf had its share of assholes, like the man who cut between a mother and her teenage daughter and then yelled at them both for not paddling hard enough. But overall, the other surfers were way nicer than I’m used to—even the men with short boards—mainly because no one had to fight for positioning like you do in the ocean. In line, other surfers were happy to teach me how to move forward on my board and how to squat down as the wave lost steam.

These vibes are one of the selling points of the park, Damon Tudor, the CEO of Urbnsurf, told me. “The difference here is that you’ve got a guaranteed wave,” he said. “So there’s a very different atmosphere of lineup. Everyone’s chatting and pretty relaxed.” Since opening in January 2020, the park has had more than 100,000 unique visitors, a spokesperson for the company said; 20 percent are beginners, 20 percent are advanced, and the rest are, like me, novices. Urbnsurf has even hosted the Australian Olympic team.

But many die-hard surfers want to surf, not train, and that entails more than just standing on top of a wave. “Surfing in a mall doesn’t interest me,” Mike Adno, a longtime surfer based in Florida, told me. Still, as these artificial parks continue popping up, more people will be raised in a culture that’s radically different from what happens out in the ocean. Waves will become something you take for granted, not a commodity you protect from outsiders and steal when you have to. In fact, Tudor claims that some guests have learned to surf at Urbnsurf and have no intention of ever leaving for the ocean. Part of me feels like these riders are getting an overly chlorinated experience of what surfing is, but isn’t the ultimate goal to have fun, not to prove some abstract point? It’s nice to be a novice, surrounded by other novices, knowing exactly when and where to catch our novice wave.

After I left Melbourne, my next few ocean surfs seemed custom-made to make me yearn for Urbnsurf: The surf was so weak there was nothing to catch, so strong it was impossible to get out to the break, or so choppy that there was no lineup, just people flailing all over, desperate to ride anything.

But then, on my last session out, during one of Sydney’s few perfectly sunny April days, I saw a three-footer rumbling toward me and guessed it would break to the right. To my amazement, it did, and I ran my hand through the face of the wave as I carved it up and down, opening my shoulders and looking where I wanted to go. It was a ride so perfect, it felt engineered. Seven euphoric seconds later, I’d ridden the wave all the way to the shoreline—and directly into a patch of seaweed.